Understanding the intersection of humans and technology

Dr Benjamin Matthews’ research examines emerging technology and its impacts on cultural interactions and the future of work. 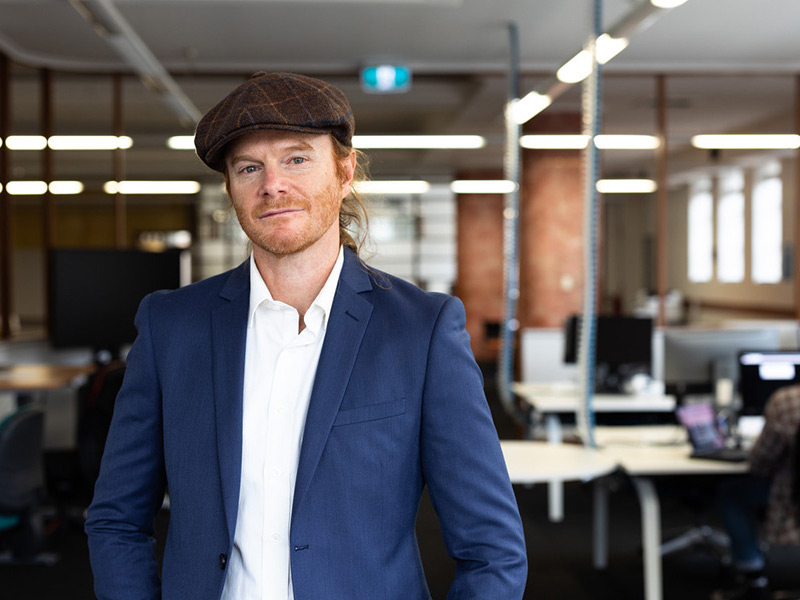 Dr Benjamin Matthews is an academic who is researching how emerging technologies can be used to help solve human problems and make lives better. The themes of Benjamin’s research around human behaviour and future work connect with those of UON’s School of Creative Industries FASTlab (Future Art Science and Technology lab).

“I’m interested in what happens at the intersection of the social and the technical. For example, how can we use virtual reality (VR) technology to help people who are mobility challenged,” Benjamin said. “It’s about using a human centred design process to make people’s lives better.”

Benjamin’s research impacts people in vulnerable positions who are the end users of new technology, as well as those who are engaged in the process of helping the end users. Through his research he is teaming up with Sydney not-for-profit The Centre for Inclusive Design.

“In terms of finding applications for emerging technology we strongly focus on seeking out inclusive user groups and those groups of people who are frequently left out. For example, I currently have a PhD student working on the creation of a mindfulness app that addresses exam performance anxiety in university students. Inclusive design is an important part of the approach we are taking. We bake that into our process and make it part of how we talk about our research.”

Benjamin is a founding member of the Early Career Researcher (ECR) Inclusive Transformative Technology Scrum – a transdisciplinary research network of ECRs focused on research and innovation in applied and clinical applications of emerging extended reality (XR) technologies. He said the transformative effects of extended reality (XR) technologies have great potential for use in a range of contexts including health, psychology, medicine, education and training.

“The scrum will bring together scholars from Creative Industries, Psychology, and the Medical and Health Sciences as there is a huge need for investigation into how research conducted into Human Computer Interaction (HCI) within a scholarly setting can be translated effectively for applied use within these contexts.”

A 2020 symposium organised by the scrum featuring key international scholars in the various fields aims to unlock the potential of their transdisciplinary, collaborative focus on the transformative role of XR technologies.

“We’ll be asking attendees at the symposium to engage in a co-creation process and discuss what they feel is coming in the future for this field. The material that flows from the symposium will capture the zeitgeist of this research from the PhD level through to world leading scholars and will be published in a special issue of the Journal of Virtual Creativity.”

The Robot Ate My Homework – The impact of automation

Benjamin is collaborating with his School of Creative Industries colleague Associate Professor Mark Roxburgh in a project called The Robot Ate My Homework to examine the impacts of automation on the future of work in the design profession, with an initial focus on the context of visual communication design.

“As they become more advanced, machines and computers are able to take on more complicated tasks that would normally require human input. This has obvious implications for the workforce and the broader social fabric,” he said.

“Having worked in the industry for many years I’ve seen designers grapple with the increasing effects of automation in the design process,” Benjamin said. “Now as an academic I’m trying to understand how we need to prepare our students for the rapidly changing world of design we currently inhabit.”

“This research will offer insights to both industry and educational institutions and will aim to answer central questions like ‘what will visual communication design look like in ten years time’, and ‘how do we shape formal tertiary education in Newcastle and Australia to deal with that scenario?’”

As part of this project, Benjamin and Mark will host a panel at the 2020 Design Research Society annual conference with the conversation aiming to capture the current state of thinking about artificial intelligence and design so academics can prepare students for a seismic shift in work practices.

“Increasingly we’re seeing software released that incorporates artificial intelligence and machine learning that automatically executes processes of design. Similarly, there are new software’s that will have the ability to ‘learn you’ in real time and adjust the user interface to radically increase a user’s efficiency,” Benjamin said.

“You also have software like Adobe Animate that automatically create 3D animated characters which allows anyone to fairly easily create a computer-generated version of themselves in characterised form. Just a few years ago that was unimaginable and would require a high-tech studio setup. Essentially these systems are allowing anyone to become a visual communications designer, which has obvious impacts on the profession.”

“The role of design is increasingly becoming about the ability to curate and understand what is most impactful and relevant for a client. I believe the training of designers will still require engagement with the fundamentals of design, but it will simultaneously involve a shift to a greater emphasis on the use of super high-tech computational tools and understanding them in a context that is both present and future focused.”

As technology has increased Benjamin says there has been a shift in industry where most of the work has been outsourced to small businesses or groups of creative individuals. One strand of his research focuses on these ‘creative collectives’ and how they use technology to work together.

“Close to ninety percent of creative industries work is done by small businesses that have 12 employees or less so it is highly likely our graduates will go into that kind of business space and engage in micro-entrepreneurship,” Benjamin said.

“It’s an interesting area where people are consciously deciding to go out on their own and join with other contactors to use their collective skills to create things and engage in practice that suits them.”

Benjamin’s chapter in the book The Critical Makers Reader: (Un)learning Technologyis an interview with the founder of a collective ‘Enkel’ in Freemantle.

“The idea of that book is to share learnings about network based making so people can get access to them and use those understandings in their own practices,” he said.

“The chapter gives an overview of how Enkel has successfully operated. Their participants engage in social entrepreneurship, run workshops and events, and work with business, government and non-profits as facilitators and consultants. They conduct social innovation experiments, like establishing temporary makerspaces, MOOC study groups and living labs in a range of settings, including co-working hubs and facilities owned by local government.”

“The skills required by a collective are the types of skills we teach in our Bachelor of Creative Industries – collaboration, creativity and entrepreneurship. We are equipping the designers of the future with the skills needed to succeed in this rapidly evolving world.”

Understanding the intersection of humans and technology

Dr Benjamin Matthews’ research examines emerging technology and its impacts on cultural interactions and the future of work.

I am a Lecturer in Design in the School of Creative Industries, with an interest in strategic communication design, design management, the post-industrial circumstances of the creative industries, emergent network cultures and media art.

I also collaborate with artists to write catalog essays and to curate cross platform media.

I completed an cross-disciplinary PhD at in 2010 (English and Communication), before moving into media industry roles in Newcastle and Sydney for several years, and was eventually invited to contribute to new undergraduate and masters programs during 2016 with UTS, and 2017 at Western Sydney University.

I have a passion for connecting teaching and learning with contemporary industry practice and growing strong networks of interaction with prospective employers and creative institutions.

This human-computer-interaction (HCI) research will lead to the creation of MindSpace XR: an assistive technology based virtual reality (VR) simulation that supports VR users and also school-age children to learn new emotion-focused skills based around mindfulness, emotion regulation and compassion in a low-risk environment.

Presents research into the transformative effects of extended reality (XR) technologies, which have great potential to generate social good in a range of contexts including creative industries, connected health and well-being, psychology, medicine, remote collaboration, digital heritage, digital humanities, education and training. Translating this promise into ethically grounded outcomes throws up complex challenges for transdisciplinary scholarly teams the world over. Here, the researchers and their partners from diverse backgrounds collaborate to innovate and find creative solutions that overcome socio-technical barriers—matters that would otherwise prevent the emergence of designs capable of addressing diverse, and often complex, human concerns.

This human-computer-interaction (HCI) research will lead to the creation of assistive technology based virtual reality (VR) simulations that supports XR users and also school-age children to learn new emotion-focused skills based around mindfulness, emotion regulation and compassion in a low-risk environment.

The Robot Ate My Homework: Automation and the future of work for design professionals 2020 -

Artificial intelligence (AI) and machine learning are driving rapid advances in visual communication design practice. Our research investigates whether the design industry and design education are prepared for a seismic shift in work practices. We are seeking answers to the following questions: How well prepared is the design profession for AI and automation? What kind of design work is vulnerable to automation and machine learning? What kind of skills will designers need to work with AI and automation? What should curriculum look like to ensure graduates will not be replaced by machines?