Each year, up to three outstanding domestic research candidates are awarded a $10,000 per annum scholarship in recognition of their achievements. 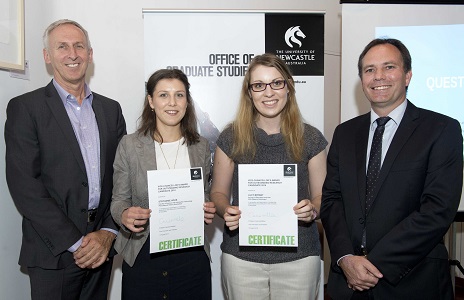 Receiving this award is an exceptional achievement. Recipients must have achieved Honours Class Once and an almost perfect grade point average (GPA). This scholarship is supplementation to their Australian Postgraduate Award (APA).

Congratulations to the winners:

Stephanie Holm graduated from the Bachelor of Natural History Illustration program with Honours Class One, from the University of Newcastle in 2012. Stephanie was placed on the Faculty of Science and Information Technology commendation list in 2010, 2011 and 2012 and was also awarded a Faculty medal in 2013.

She has produced work that has been displayed in group and solo exhibitions throughout her undergraduate degree.

Stephanie commenced a PhD in Natural History Illustration under the supervision of Dr Andrew Howells, in February this year. Stephanie's research topic is 'Investigating natural history illustration practice as chorography'.

Lucy Bryant graduated from the Bachelor of Speech Pathology program with Honours Class One, from the University of Newcastle in 2012. Lucy was placed on the Faculty of Education and Arts commendation list for 2012 and was awarded a Faculty medal in the same year. Lucy was the recipient of a Speech Pathology Australia Student Award in 2012.

As part of her Honours program, Lucy was the first author on an international journal article.

Lucy commenced a PhD in Speech Pathology under the supervision of Prof Alison Ferguson, in July this year. Lucy's research topic is 'Information Content of Language Used by People with Aphasia'.

Shannon Fenn graduated from the Bachelor of Engineering (Computer) / Bachelor of  Computer Science combined program with Honours Class One, from the University of Newcastle in 2013. Shannon was placed on the Faculty of Engineering and Built Environment Merit List in 2009, 2010, 2011,2012 and 2013 as well as being awarded a Faculty medal in 2013.

As a result of his employment in a University research team, he has co-authored two conference publications.

Shannon commenced a PhD in Computer Science under the supervision of Dr Alexandre Mendes in March this year. Shannon's research topic is 'Feature Selection and Metaheuristic-based Aggregation of Recommender Systems for Image Processing Using Crowd-sourced Information and Their Potential Applications in Digital Pathology and Information-based Medicine'