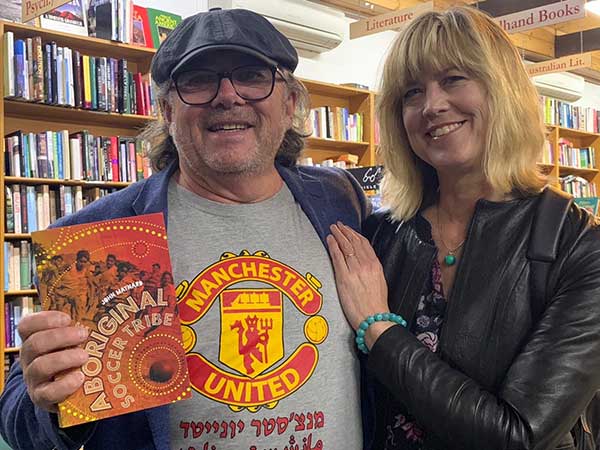 The second edition of John Maynard’s, ‘The Aboriginal Soccer Tribe’ was launched at Glee Books on 13 September, 2019 by Professor Larissa Behrendt, Director of Research at the Jumbunna Indigenous House of Learning.

Since its original publication, over nine years ago, this edition features more stories and material about the present crop of talented Aboriginal sportsmen and women and the journey ahead.

Commended in the 2012 Walkley Award and a finalist in the Deadly Award’s Outstanding Achievement in Literature, Maynard ingeniously interweaves personal narrative with history to create an untold story of Aboriginal involvement with the world game.

Dancing, Bombing and Outsourcing Corporeality: Can we love the posthuman body?

As Part of the 2019 International Research and Collaboration Scheme, Dr Devaleena Das, Assistant Professor of Women, Gender & Sexuality Studies at the University of Minnesota, Duluth, was the guest of an exceptionally positive and successful Visiting Fellowship between June and July, 2019.

Dr Devaleena Das visited the University of Newcastle (UoN) as a FEDUA Visiting Fellow under the joint sponsorship of the Purai Global Indigenous History and 21st Century Humanities centres. Dr Das contacted Professor Victoria Haskins to enquire about spending portion of her sabbatical at UON and working alongside her so the new FEDUA scheme was very timely.

Her four week visit was highly productive. During her time, Dr Das met regularly with staff and HDR students connected with the two centres. Some meetings were held off campus in Newcastle and in Sydney but always involved hosts from UON. 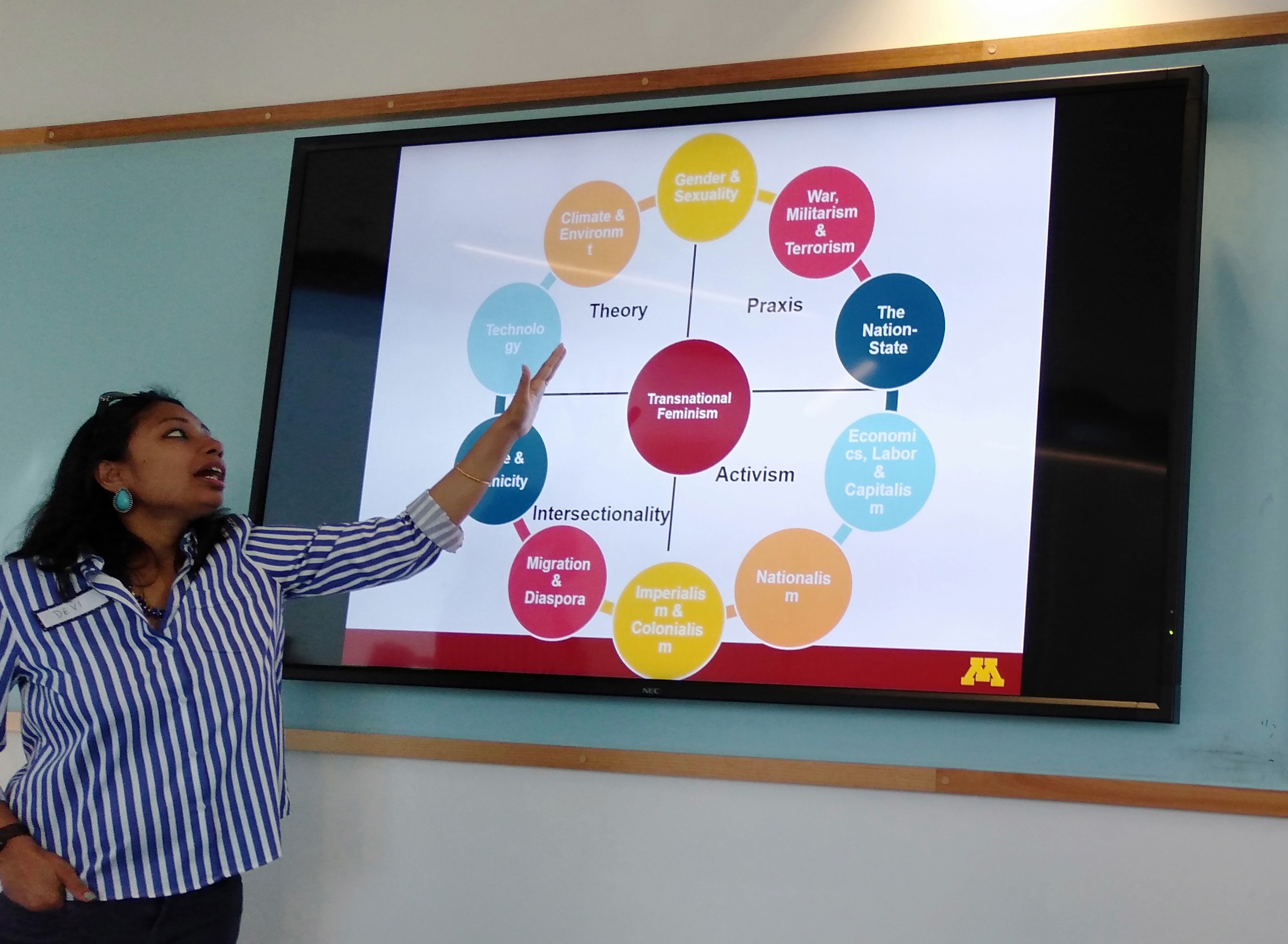 On 24 June, Dr Das gave a public talk at New Space titled “Dancing, Bombing and Outsourcing Corporeality: Can we love the posthuman body?”. Interviews and sections of the talk were recorded and have been uploaded to the C21CH website as a video promoting the innovative interdisciplinary and collaborative scholarship supported by UoN.

Her youtube video has furthermore been widely shared on social media bringing positive international exposure for the UoNs research in the humanities. The full talk is available as a podcast.

On 9 July, Dr Das conducted a masterclass on gender studies for HDR students and academic staff attended by thirteen people including an international Purai visitor from Birkbeck, University of London. The workshop, ‘Research as an Act of Betrayal: A Transnational Feminist Interrogation of Research Methodologies Across Discipline’, was a highly stimulating seminar class with Dr Das pre-circulating a set of readings and, afterwards, providing powerpoint slides to all attendees.

With advice and input from Professor Haskins, Dr Das also worked on a chapter of her forthcoming publication concerning Indigenous women, art, and performance. The final publication is due to be submitted to the publisher at the end of this year. This will not be a co-publication but has provided a way of building a strong, working relationship.

Dr Das’s university requested that she explore possibilities for a joint Masters program between the University of Minnesota, Duluth (UMD) and UON on ‘Medical Humanities’. To this end, Professor Haskins arranged meetings with Professor Cathy Coleborne, School of Humanities and Social Science (HASS) and Professor Brian Kelly, School of Medicine and Public Health, to discuss this idea. The ensuing discussion was very positive and subsequently Professor Haskins arranged for a meeting with Professor Kevin Hall, Senior Deputy Vice-Chancellor Global Engagements and Partnerships, who expressed strong support for such a program.

Discussions are now in train between relevant academic staff at both institutions with a working group established in HASS. UMD has a grant application under review to pursue this program and have indicated that they would like to continue discussions while UoN are looking at possibilities including delivery of online courses between the two institutions and staff/student exchanges. Voice, Treaty, Truth – The Uluru Statement From The Heart

Professor John Maynard joined Sean Gordon and Jackie Huggins for a 2019 NAIDOC public forum about the meaning of calls for voice, treaty, and truth. Chaired by local journalist and Newcastle's 2019 Citizen of the Year, Jill Emberson, the panel discussed how the Uluru Statement from the Heart can deliver reconciliation between Indigenous and other Australians.

Counter Currents – Aboriginal Men and Women at the Heart of Empire

Professor John Maynard presented an annual lecture at the History Council of New South Wales as part of NSW 2019 History Week. The lecture engaged and educated the community about the vitality, diversity and meaning of history and its practice.

Intimacy, nostalgia, and the visual iconography of the Indian nursemaid, from the 1760s to the 20th century

Professor Victoria Haskins presents at the University of Wollongong's Provocations Seminar Series 2019. Her interest lies in the history of colonialism and domestic labour, which grew out of my broader interest in cross-cultural relationships between Indigenous and non-Indigenous women in settler colonial histories.

Professor Haskins attended the European Social Science History Conference 2018 and was a panel member on this important roundtable discussion.

Dr Kelly, Purai Academic, was given special permission to address the members of the Upper House in parliament time on 11 October 2017 and spoke on the importance of language to Aboriginal people in NSW and the significance of the proposed Bill.

Purai Co-Director Professor John Maynard speaking at the Birckbeck Institute for the Humanities at the University of London on October 3, 2017.

On Monday 27 October 2014, Purai  in association with the UoN Politics Discipline hosted a seminar with Professor Rajeshwari Deshpande on two key and overlapping themes of contemporary Indian politics and their implications for politics-policy interface: social security and women's empowerment. Through the case study of domestic workers in two Indian states, Professor Deshpande explored the sudden visibility assigned to the marginal sections of the urban informal sector workers in the policy discourse of the Indian state and its implications for the collective political action of the poor in India.

Rajeshwari Deshpande is professor of politics at the University of Pune and currently is a visiting professor, Rajiv Gandhi chair in contemporary Indian studies at the University of Technology, Sydney. Her research interests are in areas such as politics of the urban poor, urban caste-class realities, women's politics, comparative state politics and intellectual traditions of Maharashtra. Rajeshwari is a member of the editorial management team of the newly launched Lokniti/Sage journal 'Studies in Indian Politics.' 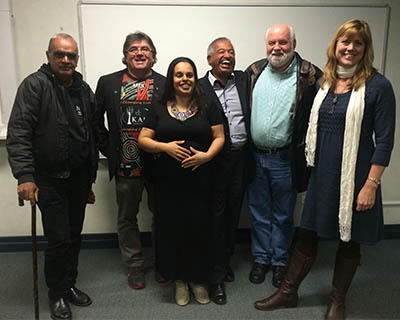 A public talk for the ReOccupying the Political workshop was hosted by Purai on Friday 26 September 2014, at University House, Auckland Street, Newcastle, with the generous support of the Australian Political Studies Association, and the Faculty of Business and Law. Speakers Dr Gary Foley (Senior Lecturer, Victoria University), Dr Sara Motta (Senior Lecturer, University of Newcastle), and Professor Chris Mullard (Visiting Professor at the Royal Agricultural College, Cirencester, UK) discussed the subject of "Silence, Violence and Myths of Social Inclusion." There was a good attendance here also, and an invigorating conversation followed.

Unlocking the Chains of Oppression – is education the key?

This research symposium was organised as part of Victoria Haskins' Future Fellowship (2009-2013) research project, In Her Place: state intervention and Indigenous domestic service in Australia and the United States, 1880-1945. Two colleagues, Dr Claire Lowrie, and Professor Pam Nilan, were co-organizers and co-convenors.

The aim of this symposium was to bring together scholars to share insights and to enter into a conversation about the connections between domestic service and colonization. We understand colonization to refer to the expropriation and exploitation of land and resources by one group over others, and to encompass imperial/extraction and settler modes of colonization, internal colonization and slavery, and present-day neocolonialism. This symposium provided an opportunity to workshop individual papers in a collegial environment, drawing out key themes, topics and issues across different sites and times.  A selection of the workshopped papers will be included as peer-reviewed chapters in a book published by an international academic press.

Three keynote speakers were invited to address the symposium: Professor Mary Romero of Arizona State University (who had been a mentor on the Fellowship application), Associate Professor Swapna Banerjee of Brooklyn College, City University of New York (CUNY), and Emeritus Professor Barry Higman, of ANU.

The composition was very international, with speakers from the United States (5, including two of the three keynotes), Canada (2), New Zealand (2), the United Kingdom (2), Turkey (1), Singapore (1), South Africa (1), Papua New Guinea (1), and Australia (6, including one of the keynotes, as well as the 3 convenors and a special guest chair). Of the Australian speakers, two were from regional NSW (Armidale and the Blue Mountains), one from Sydney, one from Brisbane (Southport), one from Canberra, and one from Perth. Speakers included established scholars of international renown and emerging scholars, as well as two postgraduate students. Registered attendees also ranged from leading scholars to postgraduate students, and came from around Australia, with one attending from the UK. There was a range of disciplines represented including: history, anthropology, gender studies, geography, fine art, and law.

The symposium organizing committee decided upon five panels, which collectively reflected both the original aims of the conference and the submissions received. These were: Resistance; Intimacies and Anxieties; the State and Domestic Service; Settler Colonialism and Domestic Service; and Comparisons and Legacies.