A White Paper report conducted by Crema Coffee Garage and the University of Newcastle measured the caffeine content of the espresso, stovetop espresso, pour over (filter brew), cold brew and French press (plunger) to provide consumers with accurate information about their caffeine consumption.

With a lack of existing information about caffeine content in espresso coffee and alternative brew methods, Project Manager of the study at Crema Coffee Garage, Ravelle King, said they carried out their own analysis to fill in knowledge gaps within the industry.

“While caffeine analysis of espresso has been explored, we found there was little information that showcased caffeine content in other methods and even fewer resources contextualised that data for the Australian market and consumers,” Ms King said.

“The results of this study are a guide to understanding which brew methods produce more or less caffeine, allowing consumers to make more informed decisions about how they consume coffee.”

“We compared the brew methods by analysing for caffeine content in each of the brew extracts using high-pressure liquid chromatography,” Dr van Altena said.

Although espresso contains the most caffeine when compared millilitre to millilitre (ml) with other brew methods, Australians typically consume more than the recommended serving size of alternative methods.

“There is no uniform serving size for all methods and each brew is served differently, which increases the amount of caffeine per serve. For example, the average person will serve the entire contents of a 3-cup stovetop in an 8 oz cup, which is double the caffeine content compared with an espresso in the same size cup,” Ms King said.

“The recommended small serving size before adding extra water or milk is 30ml for espresso, 30ml for stovetop, 60ml for cold brew, 100ml for French press and 250ml for pour over.” 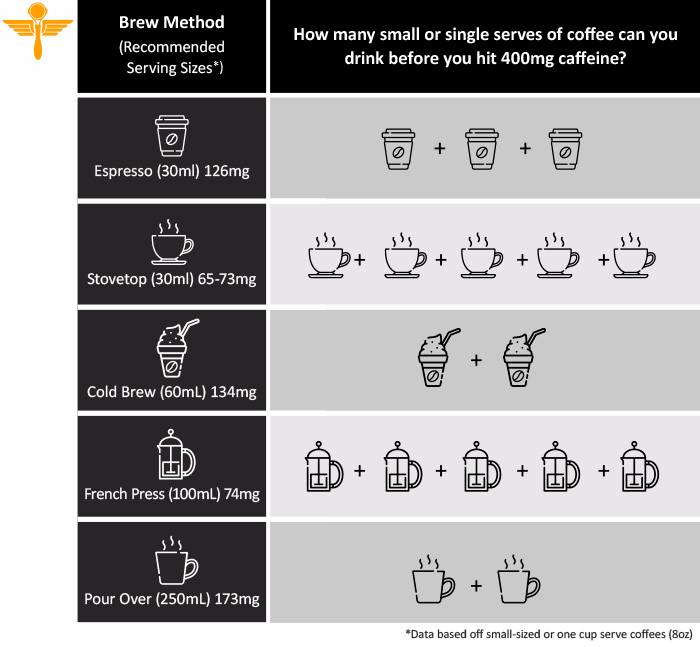 Ms King said that it was important to contextualise caffeine content according to how different markets consume their coffee.

“We intend to provide all the data from this project to the Australian market, so that consumers can better understand coffee and their caffeine consumption and make more informed decisions about their intake,” Ms King said.