Researchers from the University of Newcastle (UON) have solved the ancient mystery surrounding the stealth feeding habits of the critically endangered sawfish, findings that are likely to have a significant impact on their future survival.

The sawfish, a type of ray found in both salt and fresh water, is identified by its uniquely flattened body and snout (rostrum), which is lined with razor-like teeth. Largely found in the Kimberley region of WA, limited research into the species mean its behavioural habits are not fully understood.

Merging the fields of engineering and biology, a team from UON’s School of Engineering worked with researchers at Murdoch University and Sharks and Rays Australia to build on previous findings that sawfish, able to detect prey with their rostrum, then use a rapid lateral swipe action to impale their kill.

The team determined the hydrodynamic shape of their rostrum results in minimal impact on the surrounding water, making them an incredibly efficient predator. The results of the study debunk the widely accepted theory that sawfish sift through silt to uncover their food.

Utilising CT technology, rostra specimens of three sawfish species were scanned to create 3D models. Computational fluid dynamics (CFD), or a virtual wind tunnel, was then applied to imitate their movement in water.

“The hydrodynamic nature of their rostra makes any movement barely detectable in water. We were surprised at how fast the motion was – our modelling clearly shows that with a lateral swipe, by the time the sword reaches the prey, it’s already too late.

“Our work also shows moving the rostrum a few centimetres above the ground creates almost no disturbance at all, which would make stirring the river or sea bed difficult,” he said.

Due to their rarity and preference to feed in murky water, sawfish feeding habits have seldom been sighted in the wild, leaving researchers to rely on their observations in captivity.

Co-author and Director of Sharks and Rays Australia, Dr Barbara Wueringer, has studied sawfish habits closely and said she was delighted to have found another piece of the puzzle. 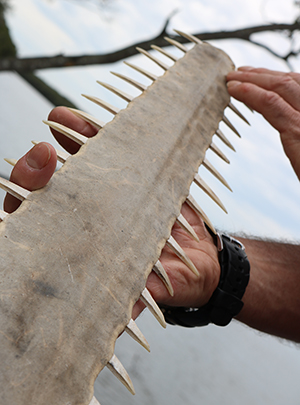 “The shape of the rostrum is likely to reduce noise in the water, increasing the ability of sawfishes to detect minute vibrations caused by prey during their lateral swipes.

“The results of our work will help us with a better understanding of their habits and ultimately help us improve our conservation efforts,” she said.

A seemingly unlikely collaboration between engineers and biologists, the project was sparked by an episode of the TV show River Monsters. UON researcher, Mr Sam Evans, saw a feature on the impressive sawfish and noted their survival was under threat.

“I thought the species was pretty amazing to look at and I was surprised to learn their behavioural habits were relatively unknown.

“Our work historically has been in wind turbines, so I am interested in the movement and efficiency of blades – I thought the sawfish rostrum was incredible and would be a really interesting specimen to model,” Mr Evans said.

It was Associate Professor David Morgan from the Centre for Fish and Fisheries Research at Murdoch University who was a featured sawfish expert on River Monsters, which prompted Dr Evans to reach out and initiate the exciting partnership.

Professor Morgan leads Team Sawfish at Murdoch University, who since 2001, have tagged hundreds of sawfish in the Fitzroy River, and work closely with Indigenous Ranger Groups in the area.

“We have encountered instances of hunters removing the rostra as a kind of trophy.”

“The findings of our study show just how instrumental sawfish rostra are for their survival and we would urge the few remaining human population centres that have sawfishes inhabiting their local waters address this destructive phenomenon,” Professor Morgan said. “These are tools we use every day for engineering problems, but now the technology is able to cross boundaries into biology. Essentially, we have the ability to apply engineering principals to something outside the engineering box,” he said.

The UON engineers hope a better understanding of this behavior may help inform future discoveries in engineering design.

The results of their research have been published in The Journal of Fish Biology.