OPINION: The human cost - psychological impact of the bushfires

By Associate Professor Lynne McCormack from the School of Psychology.

This summer's bushfire crisis has been unprecedented in its scale and duration. While the physical effects of the fires are tangible - images of decimated bush land, injured wildlife, and homes and livelihoods damaged or burnt to the ground – the psychological impacts can be more difficult to grasp.

It is likely that many individuals directly affected by the bushfires will face protracted emotional and mental wellbeing challenges. And of course, only adding to these traumatic events, we now have COVID-19!

In January, I was deployed to Bateman's Bay as a field psychologist through the collaborative disaster response arrangement between the Australian Psychological Society and the Red Cross. I was attached to the temporary Recovery Centre where charities and government agencies provided short-term assistance in the form of material aid, health care, and other services. Within days however, the recovery centre closed and once again became an evacuation centre, as a new wave of potentially catastrophic threats descended on an already ravaged population. Volunteers and citizens alike were caught in a cycle of trauma, fear and grief, with little reprieve. Vigilance, sensory triggers, and exhaustion all fed the emotional and psychological responses.

Now in late March, the aftermath continues. Up and down the coastline and into the hills, many are still sleeping in cars, caravans or bunked down with neighbours. Others are determined to remain in the smoke, fire and water damaged remains of their homes and sheds. Many people are continuing to live without adequate facilities. For some, life is likely to be uncertain for months or years long after the fires are out. All the while, simmering remains and the pungent smell of destruction act as a reminder of unprecedented disaster. As I write this article, though it is several months later, I have just had a fire alert from the RFS of two fires still burning in the area. 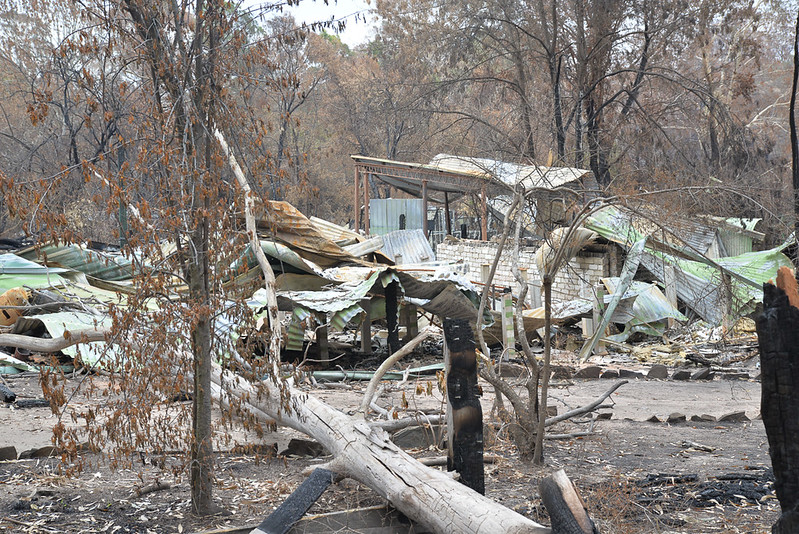 People who have been affected by the bushfires can experience psychological effects in the short- and long-term.

There is nothing post trauma about such ongoing events. For the residents on the South Coast of Australia this summer, many have remained on alert for months as out of control fires required family members to take nightly shifts while others slept, diligently watching for wind and flame direction change to bring a threatening smell of smoke, or an advancing glow of descending flames. For those who were spared loss of home, the skeletal remains of neighbouring properties may leave some uncertain whether to feel fortunate or guilty.

The human cost is fraught with immediate and long-term consequences.  In the immediacy of life-threatening events, exhaustion, irritability, constant vigilance, tearfulness, lack of concentration, guilt, grief, trying to make sense, are all normal emotional and psychological responses. In the midst of such disasters, the most vulnerable are those with pre-existing problems, be that health, financial, social, relational.  Recovery Centre volunteers are also vulnerable to life events.  Posttraumatic strategies are not appropriate as people are in the midst of ongoing trauma. Therefore, self-care strategies for surviving, coping with lack of sleep, hypervigilance, loss of concentration, loss of income, fear and grief are needed.  Guidance through a well-structured system of support that is prepared for the commonality of disaster until the crisis is over, is also crucial. The use of psychological first aid, i.e. normalising reactions to abnormal events, helps reduce a sense of being overwhelmed, and reminds individuals caught in such disasters that they are not alone in the midst of their distress.

Once the disaster settles, there is evidence that many individuals experience psychosocial outcomes that linger for some time. Others experience protracted psychological problems such as posttraumatic stress and anxiety; physical health problems such as increased smoking and drinking, psychosomatic complaints, and social issues such as financial stress, perceived lack of social support. There are also problems specific to children and youth (clinginess, temper tantrums, separation anxiety, hyperactivity).

When psychosocial support is absent, the risk of psychopathology increases. Survivors’ experience of bushfire is best understood through a biopsychosocial context as sensory memory from the day of the fires, mixed emotions (fear, relief), interplay of relationships in recovery, and the impact of other significant life events can impact on future wellbeing. There is evidence that being a parent adds to post-disaster distress with increased levels of anxiety reported in those who are parents in comparison to adults with no children. Marital stress and domestic violence may also increase during and post-disaster.

Research following the Ash Wednesday bushfires in Australia, found that within families there was an increase of conflict, irritability, and withdrawal when those families had been directly exposed to the bushfire. Overprotectiveness, irritability, and depression, and other trauma related symptoms contributed to children’s emotional and behavioural problems. 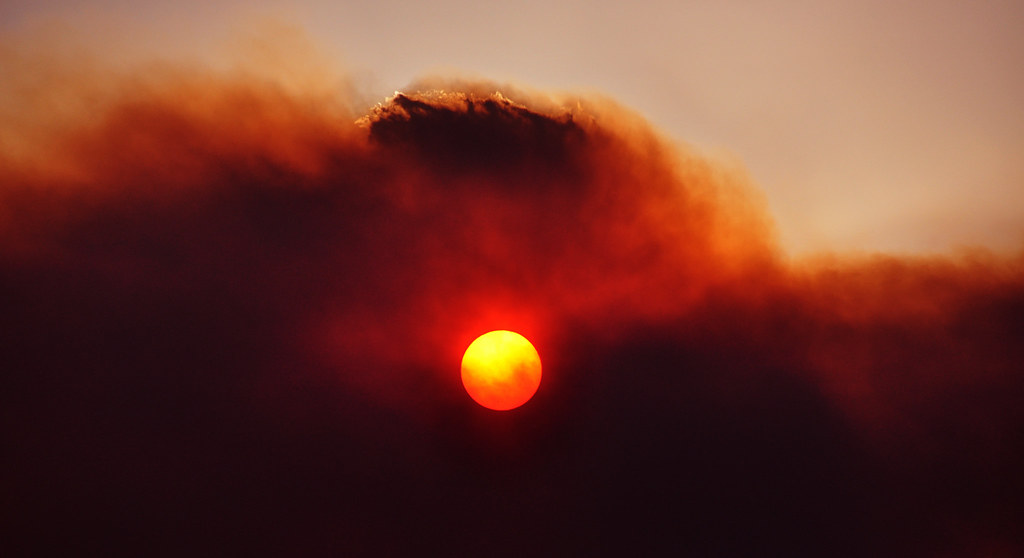 A decade following the Canberra 2003 catastrophic bushfires, a study conducted by myself and a colleague sought the long term positive and negative interpretations of parents who with their children had been at various levels of risk from the fire as it descended into their street. Many identified that guilt had dogged their recovery as they variably sought to understand their actions and decisions at the time of the fire. Ten years later, one parent was still struggling with feelings of guilt for remaining: "Did we do the right thing by choosing to remain at home and potentially traumatise our children and risk their lives - it still worries me ... making them stay ... I don’t know what harm, if any, it might have done to them or affected them somehow. Initially, they could make no sense of why or how they had survived. All expressed a sense of being on a lone journey in their recovery.

These participants explained immediate, short-term and long-term responses. In the immediate confrontation with death, they described the vivid sounds, smells, and sensory stimuli and the suddenness of being overwhelmed. Once reunited with family members, they moved about in packs, fearful of being out of each other’s sight. As they entered the recovery stage, career goals, child/parent relations, intimate relationships, and sense of community took unexpected directions. They re-evaluated long-term relationships - some survived, some did not. Recovery was complicated by a sense of betrayal, even abandonment by first responders. A sense of being able to trust others diminished as society quickly lost interest in their plight and it was no longer headline news. As the years moved away from the disaster, financial reparation proved grossly inadequate.

Cumulative on the traumatic events of the summer, the world is now confronted with the uncertainty of COVID-19. As a consequence, recovery will be slow as individuals struggle to adapt to new behaviours as they rebuild their lives post fires and floods. In the immediacy during this time of uncertain, there are many things we can do to manage our stress including:

It's not all bad news

Long term there was evidence of post-traumatic growth and positive change – change of career, relationship growth, better parenting, new perspectives that would not have been possible without the sudden punctuation of extreme life-threatening loss. Post-traumatic growth is often the result of extensive redefining of life direction in the aftermath of complex trauma. Intrinsically, in the case of the Canberra fires, despite the losses, many experienced increased empathy, love, and gratitude.

How can we support bushfire communities going forward?

Catastrophic bushfire events are increasing in frequency as the global temperature continues to rise. Despite physical and material risks, these events are psychologically confronting and fraught with traumatic distress.

This summer has placed Australia well and truly on the international stage of catastrophic disasters. The International Federation of the Red Cross along with many other international humanitarian organisations have devised protocols for international disasters:  1) preparedness stages for reducing risks; 2) vulnerability and capacity assessment; and 3) disaster preparedness tools including psychosocial support.

Rather than reinventing the wheel, budgets may be better spent adapting these protocols for our own unique circumstances, including assisting victims, engaging with training, readiness, and collaborative preparedness particularly during our 'disaster' period, November to March.  Adapting these protocols needs to be married with the debrief and lessons learned by government and organisations in the wake of the Torch and Burn Summer of 2019/2020! Certainly, we can test our preparedness skills as we move towards protecting each other from COVID-19 and support those working towards a vaccine.