The unprecedented finding sheds new light on the origins of Australian language and has significant implications for the cultural history of Australia.

The result of a collaboration between the University of Newcastle (UON) and Western Sydney University (WSU), the finding is the first time the theory that all Australian languages derive from one language, Proto-Australian, has been proven. 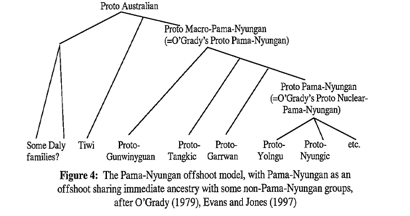 UON Chief Investigator and historical linguist, Associate Professor Mark Harvey, said the finding was an exciting culmination of a three-year project, which he hoped would enhance the understanding of Australian and human history.

“Until now, it was speculated that Australia was significantly more linguistically diverse than somewhere like Europe, because it had not been proven that all Australian languages actually stemmed from the same lineage.

“This is the first demonstration that all Australian languages are part of the same language family. This language family spread across all of Australia, presumably from a small area in Northern Australia. This spread is likely to have been carried out by at least some population movement whose material and genetic traces have remained somewhat elusive.

“However, with further interdisciplinary research, this new linguistic evidence is likely to give us a more precise reconstruction of Australian prehistory from what is currently known,” Associate Professor Harvey said.

The project used the standard method in historical linguistics to establish whether similarity between languages was due to inheritance from a common ancestor, as opposed to transfer from one language to another through human contact or chance.

WSU Chief Investigator, Associate Professor Robert Mailhammer, said the findings revealed recurrent similarities between languages that were not in contact.

“We discovered that the sounds of words we compared showed recurrent systematic differences and similarities across a set of languages that are spread out in a geographically discontinuous way, which makes it very unlikely that they are the result of chance or language contact,” Associate Professor Mailhammer said.

While a multitude of Australian Aboriginal and Torres Strait Islander languages were spoken at the time of European settlement, the findings also imply that Indigenous Australian languages only spread after the end of the last ice age, some 10-12,000 years ago.

“These findings show that Indigenous Australian languages were not the likely languages spoken by the first inhabitants of Australia, raising more questions around how the languages spread and how the linguistic findings connect to the genetic findings,” Associate Professor Mailhammer added.

Both researchers recognise that work in this area will continue, with plans to publish a book on Proto-Australian and collaborate with other disciplines to inform what is known about the prehistory of Australia.

Funded under an Australian Research Centre (ARC) 2014 Discovery Project, the key research was published in the leading journal of historical linguistics, Diachronica.

Researching in the field of Indigenous language, Dr Raymond Kelly from the University of Newcastle’s PURAI Global Indigenous and Diaspora Research Studies Centre said the findings would come as a welcome relief to many first nation people in the state of New South Wales (NSW) working at the coal face of language reconstruction, revival and renewal programs.

“During the course of research for my own PhD, I also developed a similar conviction that Aboriginal languages in NSW are formed or drawn from a single source and expand beyond the state and territorial boundaries that we know exist today. These findings provide a healthy opportunity to re-evaluate the concept of connection and relationship for community,” Dr Kelly said.