For the second year running, a Master of Architecture alumnus from the University of Newcastle has received the New South Wales (NSW) Graduate Medal, which is the most prestigious award available to a graduate of architecture in the state.

Established to acknowledge excellence in architectural design, the NSW Graduate and Student Architecture Awards showcase the top student work from across the four architecture programs offered in the state.

This year’s prestigious title went to Andrew Hannah-Davies for his final-year project, Beneath the Surface, which proposes redevelopment of the existing facilities and surrounding landscape of the famous healing waters at Moree Artesian Aquatic Centre.

As a site of cultural and historical significance, the mineral waters of Moree Baths were a catalyst for change during the student Freedom Rides led by Charles Perkins that were highly influential to the 1967 referendum and Indigenous rights.

“Beneath the Surface takes the user on a social, physical and ethereal journey of healing. It is a bold demolition of the old, cleansing away that negative karma of the past via acknowledgement of that past, and a poetic reconstruction of the new,” Andrew said. 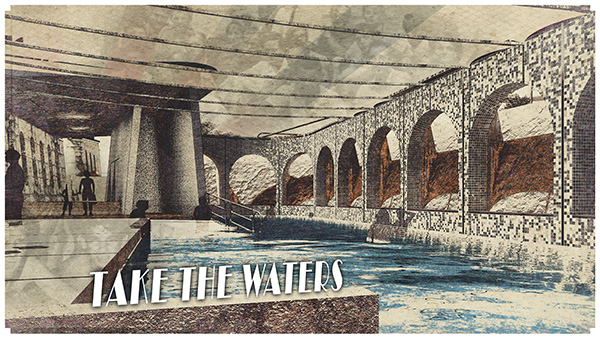 Drawing from Andrew's winning project of the re-imagined Moree Baths.

Drawing on Andrew’s own personal passion and belief in the healing power of water and aquatic environments, the project tackles the issue of segregation and the dire need for quality public infrastructure for Moree residents.

“The project tackles an issue commonly found within regional towns in Australia; being racism and more specifically the local Indigenous population excluding themselves as a result of past clashes.

“The project is a culmination of my belief in the healing power of water and it is a huge honour to receive this award. I hope it serves as a great launchpad for a lifetime in architecture,” Andrew said.

The Awards are recognition of the student success and excellence within the University’s architecture and built environment discipline, which was ranked in the top 100 in the world by the QS World University Rankings by Subject 2018.

The NSW Student Architecture Awards Exhibition is currently being showcased at the Australian Institute of Architects Tusculum in Potts Point until 16 March.