Distinguished Professor Larissa Behrendt AO delivered the inaugural John Maynard Aboriginal History Lecture at University House to an on-line and face-to-face audience of over 180, on 17 March 2021 as part of the Purai Global Indigenous History Centre showcase.

The University of Newcastle’s Vice Chancellor, Professor Alex Zelinsky, congratulated Professor John Maynard on his achievements as an Indigenous leader both within the university and the nation and said his elevation to Emeritus Professor by the university council was well-deserved.

The event also provided the opportunity to launch a series of websites and showcase the work of Purai Global Indigenous History Centre, a research centre co-founded by Professor Maynard with Professor Victoria Haskins in 2013, that promotes, inspires and privileges global Indigenous voices in the truth-telling of historical narratives.

In her lecture titled The Unconventional Legacies of Emeritus Professor John Maynard, Professor Behrendt elected to embrace a personal response through her lecture to the work of a man she describes as a “mentor, colleague and friend”.

Professor Behrendt told her audience that it was Professor Maynard’s work on Aboriginal activism, told partly through the writings of his grandfather, Fred Maynard, and his work with the Australian Aboriginal Progressive Association (AAPA), founded in the 1920s, that has particularly influenced both her own work, and the academy more generally.

She explained that Professor Maynard’s work reveals the existence of a sophisticated, motivated and effective organisation that not only advocated for liberation, emancipation and equal rights of Australian Aboriginal people, but shone a light of the treatment of Aboriginal women and girls.

“He also uncovered and published in his work moving letters that highlighted the attempts by Fred Maynard and his peers to intervene to stop the mistreatment of Aboriginal girls who were under the control of the Protection Board, many of them badly abused, sexually abused in their placements,” Professor Behrendt said.

Professor Behrendt reminded her audience that Professor Victoria Haskins has been an integral to Professor Maynard’s legacy and has played a critical part in his success.

“I always tell my husband that you can tell the quality of a man by the woman that stands beside him,” she said. 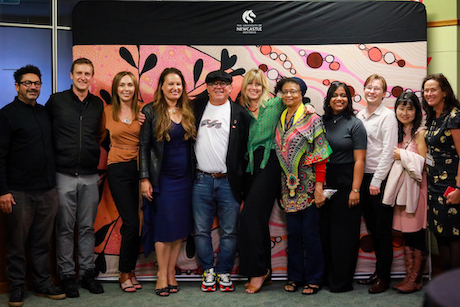 The driving passion motivating Professor Maynard's historical work is not just academic scholarship, she maintained, but “reclaiming our stories and ensuring our voices, experience and perspectives and activism are remembered, accounted for and sit next to our body of knowledge.”

She says that the efforts of Professor Maynard to initiate projects and alliances between Purai Global Indigenous History Centre and Wollotuka Institute at the University of Newcastle, and the Jumbunna Indigenous House of Learning at UTS, have been instrumental in this success.

“It’s been an important relationship that you [Professor Maynard] have fostered between our institutions and, amongst that, a generation of scholars that have come in behind you and had the benefit of your mentorship,” Professor Behrendt said.

Professor Clague said that initially they thought they would make some short films but then Professor Maynard sent through “notes” that were really “papers with their own footnotes”.

“We had so much fun sitting in a room with all this artwork of the many faces that are John’s icons,” she said. She told Professor Behrendt, “We can’t do just the films, Larissa, this is something bigger and we need to find a space for that.”

The answer was the creation of a website, Historical Indigenous Figures with Professor John Maynard which hosts the artwork and Professor Maynard’s notes, as well as short films produced by Professor Clague and directed by Professor Behrendt.

The first episode was previewed during the evening, featuring racing legends Richard ‘Darby’ McCarthy and John Maynard’s father, Mervyn Maynard, who rode over 1500 winners between 1949-1994.

“John is not only a great writer, but when he speaks of the stories of his people and particularly the people he is so passionate about, you see the world of these people come to life ... and we wanted to try and capture that spirit and that energy,” Professor Clague said.

The centre invites researchers from across the University of Newcastle to draw on the connections that Professors Maynard and Haskins had created to generate new research projects.

One such collaborative project is Ayahs and Amahs: Transcolonial Servants in Australia and Britain 1780-1945 which brings to life the experiences and histories of the world’s first global domestic workers, Indian ayahs and Chinese amahs (nursemaids) who were employed by colonial families during the period of British colonialism.

Professor Victoria Haskins launched the Ayahs and Amahs website which will be used as the base for this research over the next few years.

She believes the centre is unique in the way it brings together the local and the national with the global.

“Research from across the world and the experiences of Indigenous, colonised and marginalised people from around the world show how these histories are really connected and tied in together.

“Our main purpose is to mentor, support and nourish global Indigenous histories and in Purai we have two main aims: the first is to generate new research methodologies of Indigenous global history and the second is to really harness international collaborations in Indigenous histories,” Professor Haskins said.

You can watch a recording of this event here: