Giving a piece of today for tomorrow

When Roy Palmer and his wife Marie bought their slowly regenerating bush block at Broke in 1978, they found the greatest asset it had was its ability to grow 'tranquillity'.

But as its tranquillity grew, so did a desire to preserve and honour it to ensure the magical combination of returning flora and fauna could never be threatened by bulldozers and buildings.

"A lot of people who live in the bush work hard to keep nature at bay," Roy said. "But Marie and I always worked hard to give nature every chance." 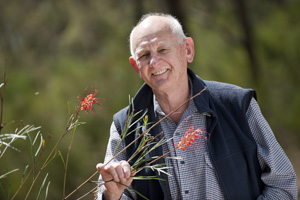 After buying it as a weekend retreat more than 30 years ago, Roy and Marie made a small area of the 10-hectare block their permanent home in 1994, and in 2004, had 8.5 hectares of it gazetted following a Voluntary Conservation Agreement in perpetuity, negotiated with National Parks and Wildlife Service (NPWS).

For Roy, who sadly lost Marie a few years ago, his beautiful bush block is now not only a home, but also the perfect place to study and record the bountiful flora and fauna living there. Linked to the NPWS's Atlas of NSW database, as well as to the CSIRO's Australian National Herbarium, his detailed database will yield invaluable information for Australian botanists for generations to come.

To date, Roy has logged more than 350 species of flora and 100 species of birds on his block. It was this love of the land and a desire to give back that many years ago inspired the couple to support the University of Newcastle through scholarships and, ultimately, a bequest.

"Marie and I were fortunate enough to cross paths with some local Indigenous elders on the Central Coast, Newcastle and Singleton, which led us on a journey to a deeper understanding of Indigenous culture," Roy said.

"On that journey, we met Aunty Barbara Foot and we were inspired to support the Kooris in a direct sense. That is when we began giving to the Jack Doherty Undergraduate Scholarships for Aboriginal and Torres Strait Islander students. It gives me enormous satisfaction to know that my help goes directly to the recipients." Roy says leaving the University a bequest is a way of enabling others to benefit from an education.

"My education has been so important to me on the path I have taken in my own life, so giving money to the University makes sense to me and links me to my interests – the environment, engineering and medicine."