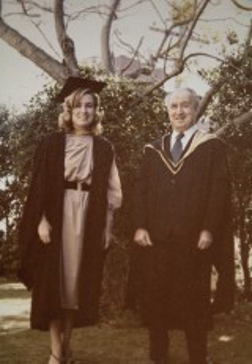 Frances Doherty remembers her father as a humble man with a strong sense of social justice, whose activism to bring change for Indigenous students had an indelible impact on the University’s history.

Jack Doherty was a University of Newcastle Science lecturer with a passion for education and equity. He was integral in founding the Newcastle Aboriginal Support Group (NASG) in 1980 and despite the cause being unpopular among some, Jack helped build a strong group of like-minded individuals to listen to the concerns of Aboriginal people in Newcastle and to support them.

Jack saw tertiary education as a key factor in Aboriginal empowerment and until he passed away in 1990, he worked tirelessly in the cause of recognition and justice for Indigenous Australians. The Jack Doherty scholarship was established to honour his memory; the intention of the scholarship is to encourage Aboriginal and Torres Strait Islander students to complete studies at the University of Newcastle. The scholarship is now formally named the Doherty Ellis Undergraduate Scholarship for Aboriginal and Torres Strait Islander students and is funded by community donations; since its establishment over forty scholarships have been awarded.

Following in her father’s footsteps, Frances is also passionate about equity in education and supporting students to complete their studies. Frances not only generously donates to the scholarship now, she plans to leave a gift in her will to the University to ensure the scholarship continues beyond her lifetime, and the legacy of her father endures.