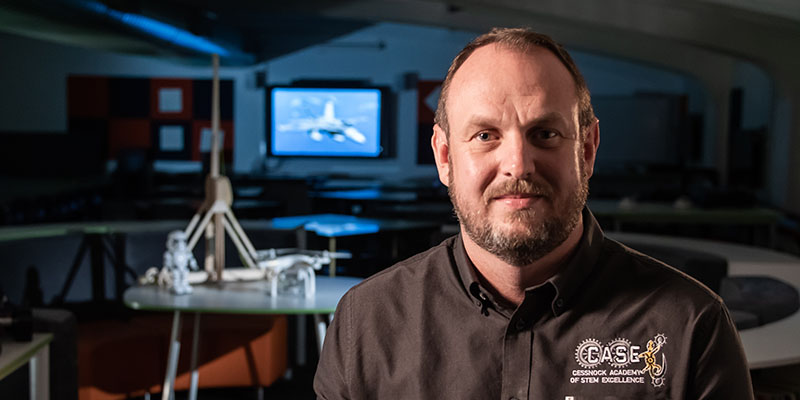 Scott leads the STEM Industry School Partnerships (SISP) program for the NSW Department of Education and is a Conjoint Senior Lecturer at the University of Newcastle. The SISP program won the NSW Secretary’s Award for Excellence in 2019 and components of his work have been identified as world’s best practice by the Organisation for Economic Co-operation and Development (OECD).

“In recent years it's been about getting teachers to be able to teach STEM in a way that allows students to really get engaged. Instead of the teacher being the fount of all knowledge, we work with students so that they become the leader of the learning. If you look at educational theory, a student might retain five percent of what they hear from a teacher. But, if they actually do it and experience the learning, the recall goes up to 70, 80, 90 percent.”

Between 2015 and 2017, Scott was Director of a $5.2 million STEM school/industry skilling initiative, where he established himself as a leader in STEM education and workforce development.

“The biggest problem in STEM is the steady decline it has undergone since the 1990s,” said Scott.

By working with the University of Newcastle and local industry, Scott helped develop iSTEM, a fit-for-purpose course that saw a 20 percent increase in the number of students who were taking STEM subjects in the Hunter, at a time when the rest of the state saw a reduction.

“Following the incredible success of the program in New South Wales, it has continued to grow and grow. Not only are we working with educational authorities right across Australia, we’re now reaching 30 different countries. It’s grown from a little seed in the Hunter, and it's expanded into international coverage. It's been quite a journey,” said Scott.

Scott is no stranger to accolade. He was awarded the Prime Minister's Prize for Excellence in Science Teaching in 2018. He was a finalist for the 2019 Teacher of the Year in the Australian Education Awards and was recognised in 2020 with a National Commonwealth Bank Teaching Award. He has been inducted as one of only three national patrons of the Australian Design and Technology Teachers Association (DATA) and in 2019 he was appointed as an Ambassador for the NSW Cyber Security Network. Dr Sleap is also on the Advisory Committee for the NSW Government Space Industry Development Strategy and was on the organising committee for the 43rd COSPAR Scientific Congress, the world's most prestigious space research conference.

“I'm currently working with other educators around the world on a fantastic space program. It has enabled me to connect with people like myself in the United States, United Kingdom, Japan, New Zealand, and we're all working together on a very common goal - to engage young people in STEM. Long after I'm gone, I hope my legacy includes these approaches in teaching.”