We catch up with Brett Neilan, to learn more about his journey to joining UON as the new Head of School, Environmental and Life Sciences.

Think of all the factories in Newcastle that are not being used that could be used for fermentation, for growing bacteria to produce drugs. It’d be like a boutique brewery but for drugs.

Mum was a cleaner and dad was a garbo. I grew up in Maroubra in Sydney. I was the first in my family to go to University and I studied biomedical science at UTS. Mum was extremely proud. Dad had no concept, three years with no money? Why would I do that!

After I graduated, I left home and moved to Adelaide. For two years, I was a research assistant at the Australian Centre for Genetic Technology, the first biotechnology company in Australia, and we made enzymes and radioactive DNA to use in experiments. This job gave me two openings – one into genetic engineering research and one into commercial biotech.

After a depressing stint as a forensic biologist, I was very lucky and got a job at the Garvan Institute of Medical Research in Sydney at the time when John Shine was the first person to clone a human gene. John was a great person to work with and I learnt so much about molecular biology in the really early days of it being done in Australia. My job split off into John’s private biotechnology company, called Pacific Biotechnology, and that was about commercialising and doing patents for infertility drugs.

I started on PhD but finished another. My second attempt at a PhD was in environmental microbiology of water. In 1990, NSW had a huge algae bloom in the Murray Darling River and people couldn’t drink the water. I studied that bacteria and the genetics of those microbes to work out why they are toxic and why they grow into these blooms. I went from a hospital lab, working on humans, to being out in the field picking up beakers of water, but using the same molecular technique called PCR (Polymerase Chain Reaction).

When I went to America, I didn’t look at water anymore, I looked at geology and the interaction between rocks and bacteria. After my PhD I got a NASA fellowship at Stanford University to study the connection between microbiology and geology. That gave me a new interest in a field called astrobiology. It’s not a real discipline of science, but I like to talk about the science of astrobiology because students enjoy it. It’s a bit like, how did life begin? Is there life on mars? I didn’t know what I was getting into when I worked in California but that led me to a fellowship in Germany, the Alexander von Humboldt Fellowship where I studied the way drugs form in the environment.

There are a lot of drugs being produced that we don’t know about. What I am doing now is studying the way drugs are made – to discover them in the environment, in soil and water. Essentially penicillin could come from the bark of a tree. We look at the genetics of what is out there in the environment and if we can clone that DNA, then we can produce those drugs. The problem now with a lot of drugs is we can’t produce enough of them for the population. This comes back to biotechnology where you can clone genes and grow a lot of it in a fermenter, just like you would for beer. You grow it and extract all the drug out of it, and that’s a really sustainable way of producing pharmaceuticals.

The opportunity of STEMM is to define ourselves by the goal of our science in terms of what are we going to give to society at the end of all our investigations.

We have forty thousand years of thinking to tap into. For 40,000 years Indigenous Australians have used the same trees and barks as medicine, and there is a reason – because there is a drug in them. They’ve got traditional medicines and it’s fascinating to work out the chemical basis for why they’re medicinal. Getting more of the Indigenous medicine knowledge into our Anglo-Saxon knowledge base should be seamless, it should all just be incorporated. 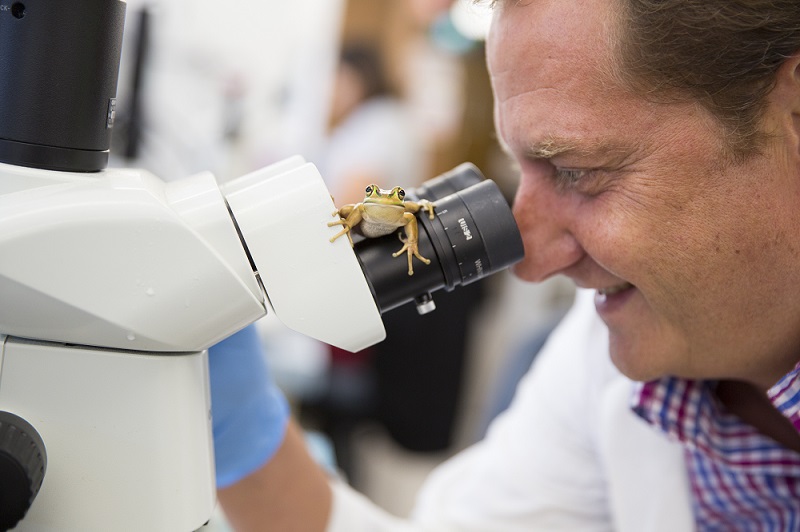 One of the reasons I like the idea of working in Newcastle is because you’ve got natural habitats surrounding Newcastle. Newcastle also has a heritage of being a production and manufacturing type of town. Think of all the factories here that are not being used that could be used for fermentation, for growing bacteria to produce drugs. It’d be like a boutique brewery but for drugs.

I love UON’s access and equity policy. I came from a working class background and I didn’t get a great ATAR, but my parents taught me work ethic and that got me through. For my school, I like the idea of pulling in a huge diversity of students, particularly those from lower socioeconomic backgrounds. What I am looking forward to most in this role is improving the quality of the graduating classes.

The opportunity of STEMM is to define ourselves by the goal of our science in terms of what are we going to give to society at the end of all our investigations. Think of the benefits of having lots of engineering, medicine and science students together – cohorts interacting, postgrads with undergrads – and having academics and infrastructure together, it’s going to be much easier to collaborate.

We need to consider how we transfer technical science to be useful for society. It’s a huge challenge for Australia to ensure we aren’t losing inventions and scientific discoveries. Having biologists together with engineers for example, could give huge opportunity for manufacturing. You can discover drugs, but then you have to produce them. It’s about alternative manufacturing processes.

I like to think I’m the type of person that people can just come and talk to. I prefer communication face-to-face. I don’t like the phone much. This school has 80 academics and 180 staff over Callaghan and Ourimbah, so it can be hard to talk to everybody. I like email for getting bulk information out quickly and accurately. We have a school meeting a couple of times a year, so I tend to use a lot of email, but for the important things, it’s face-to-face and meeting with smaller groups or by discipline. My leadership style is fluid, coming in as fresh as I am, it’s a bit affiliative now as I’m gathering information. But if I look back at the way I was running a laboratory for 20 years at UNSW, my style was almost laissez-faire. With my senior scientists, we communicate at a peer level.

I came from a working class background and I didn’t get a great ATAR either, but I had a work ethic from my parents that got me through. 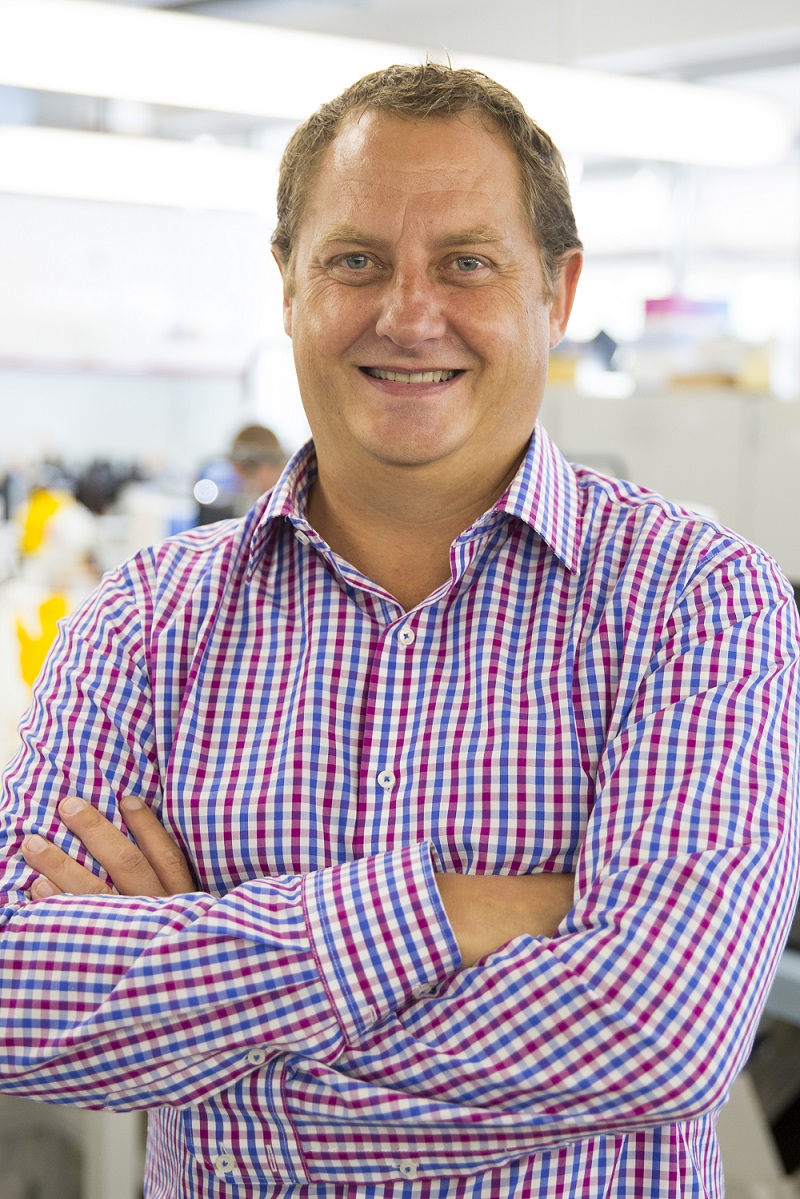 I do believe that a lot of issues can be solved quickly if dealt with quickly. It’s good to verbalise and get things off your chest, ask if you need help. Is there an avenue to solve this issue? Sometimes there’s not, but if you don’t ask, you don’t get.

Helping younger people is really important. I like to be able to draw on my broad experience to help mentor younger people. My generation wasn’t mentored, it was dog-eat-dog and survival of the fittest so hopefully now with more mentoring coming into the practice, younger people will take that through their career and it will be reciprocated.

We’ve got a little run down shack on the Hawkesbury River. Its water access only so every second weekend we go there and do a bit of hobby farming. My wife does the constructive side of hobby farming and I do the destructive side – she grows vegetables and eggs and I get to use a chainsaw, I just cut stuff and burn it. We’ve had it for two years and the kids love it, there’s no wifi or TV, but we do have a dial in radio! The fishing is good but I can’t fish. I just can’t. I can be right next to someone who is fishing and they’re pulling in fish and I’m like, ‘what am I doing!?’ But other family come and they fish so that’s great.

You make these little decisions in your life and they turn out to be very important later on. If I look back on my career over 30 years there are so many parallels. It didn’t matter if I was looking at humans or the environment, it’s the same sort of questions being asked. It all comes back to evolution and genetic diversity and how do we as humans control that genetic diversity of our planet for good?