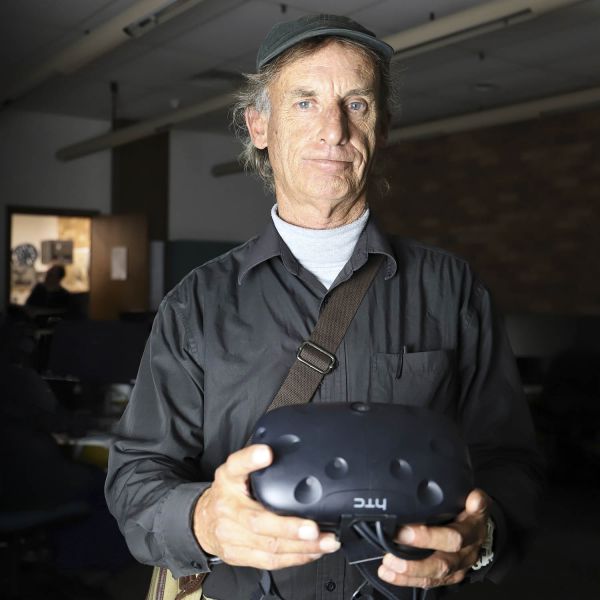 Approximately 5,500 various artefacts removed from a small, rectangular dig roughly the size of a family swimming pool reveal that the area was once a work site for Aboriginal people.

Archived in the University of Newcastle Cultural Collections, the artefacts have been brought off the shelf and into the 21st Century by this exciting new project.

With the permission of Traditional owner groups, a 3D scanning facility was established to digitise the artefacts and transform them into a Deep Time virtual reality experience.

Undertaken within the University’s GLAMx (i.e., Galleries, Libraries, Archives and Museums) Digitisation Lab in collaboration with the IT Innovation Team, almost 50 stone tools have been painstakingly scanned and uploaded into the digital platform.

By placing a virtual reality headset on, the user is transported two metres underground into a virtual dig where they can use hand controls to inspect the individual objects suspended amongst grid-like layers.

University Archivist, Mr Gionni Di Gravio, said the objects were given a call number and accompanying information to maintain accuracy.

“We’ve tried to create a 3D representation of the dig at Newcastle West by placing the scanned artefacts back into their original positions as they were found when the dig was underway,” Mr Di Gravio said.

“Archaeologists are very similar to forensic scientists and archivists in that we like original order. The scene tells a story as well as what’s found in it, so you have to preserve where things are found.”

Living Histories Coordinator, Dr Ann Hardy, said that the process of digitising and making artefacts accessible is contributing to new knowledge about our culture and society.

“This project has revealed that Aboriginal people existed here six-and-a-half thousand years ago and has brought new knowledge that it was a place of industry,” Dr Hardy said.

Senior lecturer and Indigenous historian at the University’s Wollotuka Institute, Dr Greg Blyton, said that Australia still needs a legitimate history of all its people and that technology may be a way to better understand the past.

“These are not just stones and rocks, they are the living and breathing products of a culture and a people that was changing and evolving all the time,” Dr Blyton said.

“I think people and technology have got to work together to try and realise that this country’s history of human occupation is a long one and every Australian has a right to share that history.”

“This project provides an opportunity for people to experience the essence and integrity of what was there on that site, but it’s important to remember that this was the work of a people who should never be forgotten or omitted from the story.”

Using new tools to build on the past

While scanning each artefact only takes a few minutes, Dr Hardy explained there are a number of stages to the digitising process and most work happens in post-production.

“We’ve begun with the larger artefacts and each item is placed on a rotating plate inside a small light box where they are scanned on each side with a handheld scanner,” Dr Hardy said.

“After the scan, the two halves are manually joined so they come as close together as possible. The last part of the process involves adding the texture and the fine grain before attaching the metadata and uploading it to the digital platform.”

Underway for over a year now, the Deep Time VR project has been a tool for student development and a University-community engagement tool.

“Deep Time is a digital humanities project and involves many disciplines to help build new knowledge about Aboriginal cultures. We’ve had students volunteer on the project as part of work integrated learning (WIL), and many individuals and groups have visited us from the community to experience the VR,” Dr Di Gravio said.

“All this work that we’re doing here is just our little bit in helping to bring university scrutiny and academic rigour to this material.”

The intricate detail of artefacts too small to be scanned have been documented by Natural History Illustration student, Emma Heath, who sketched 300 artefacts from three different angles with scientific accuracy.

“I got brought into the project originally to draw the stone artefacts that the 3D scanner couldn’t capture. I started with about 30 artefacts that were Bondi points or Microliths and ended up drawing about 300,” Emma said.

“The best thing about this project was that it involved the perspectives from so many different disciplines, including artists, illustrators, geologists, archaeologists and archivists.”

Dr Hardy said 3D technology is changing the way people think about what can be digitised.

“Many different cultural items have been locked up for decades. It’s only been recently with the changes in technology and digitising artefacts that we’ve been able to share them with the community,” Dr Hardy said.

“It’s changing the way people can access and interpret the material for research purposes. The technology is also transportable, opening up a world of opportunity to scan artefacts and items out in the field.”

“Our aim with this project was to make it possible not only for us, but for future generations, to look at this site and find answers to the questions they might have in 20 years that we haven’t even thought of yet.”

“Accordingly, we are moving towards including more sites so that we could analyse and compare sites from historical evolution perspective” Dr Moghadam said.

Recognising the broader applications of the technology, the project team are working to create the foundations of a tool that can be exported and shared with the wider community.

“We would love to be able to take what we’ve got here at the University and have it accessible in a school environment for example. A 3D experience could be of anything, from posters and photographs to oral history or films,” Mr Di Gravio said.

“Kids could put the headset on and see the dig as we do here. We’ve got the mechanisms to make it work, but for us, we focused on these artefacts first in an attempt to marry the learning and wisdom of Aboriginal culture with Western science because we need both to have a sustainable future.”

“We can compare this Aboriginal collection of stone tools with other sites on the east coast and throughout Australia, or even with the stone tools found in other cultures around the world, to better understand geological time,” Dr Hardy said.

“The technology could also be used to scan artefacts at future excavations to maintain a permanent record if Aboriginal communities wish to have artefacts reburied.”

“We want the community to come to us with their ideas as it is a project that does belong to the local Aboriginal community and we want to ensure they are supportive of what we’re doing.”

More information can be found at Hunter Living Histories.