Two former Australian Prime Ministers were recognised for their contributions to the nation, in particular the higher education sector, by the University of Newcastle today. 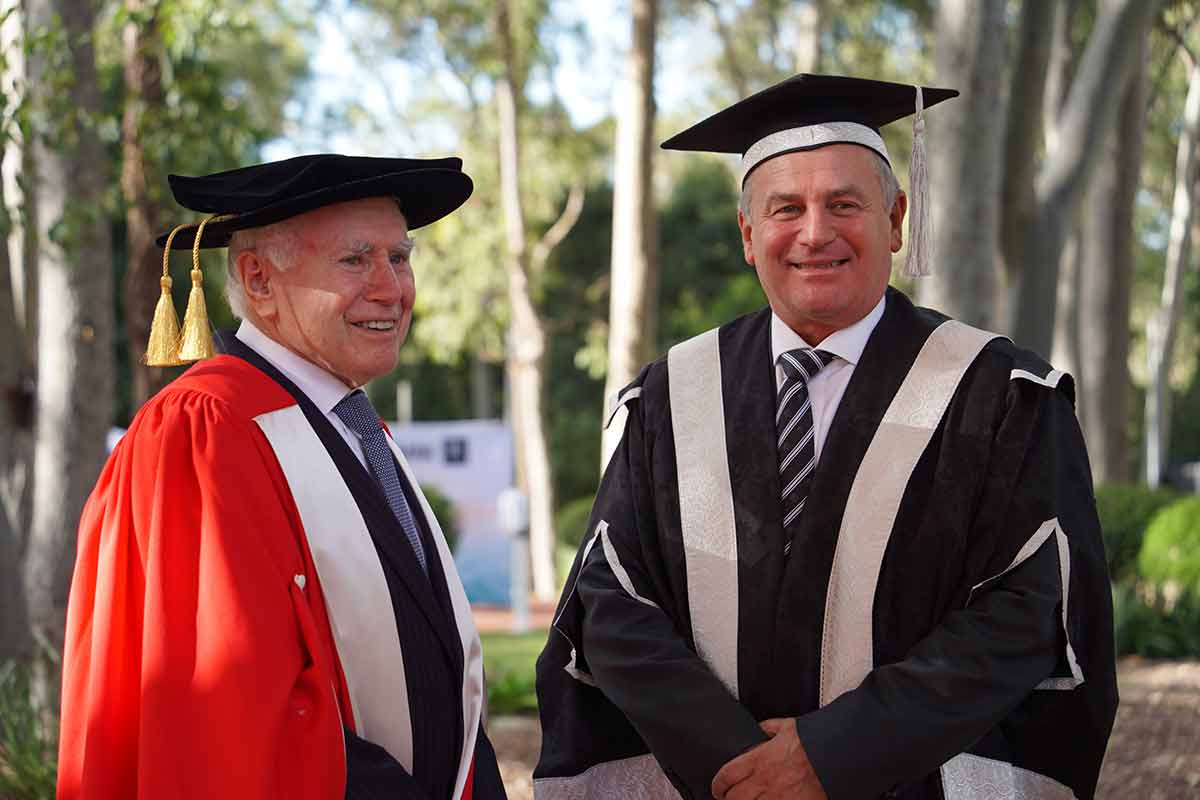 The Honourable John Howard OM AC SSI and The Honourable Julia Gillard AC were announced as recipients of an Honorary Doctor of Letters honoris causa.

Mr Howard accepted his honorary doctorate at the 2pm graduation ceremony today, where he also delivered an Occasional Address, while Ms Gillard will accept hers at a future ceremony.

Vice-Chancellor, Professor Alex Zelinsky AO, said Mr Howard and Ms Gillard had made remarkable contributions to public life in Australia and he hoped graduating students would draw inspiration from their service and leadership.

“Among Mr Howard’s many achievements during his time as Prime Minister, the decisive action he took to reform national gun control laws in the wake of the Port Arthur massacre is one of the most powerful examples of leadership in Australia’s political history and quite rightly, he continues to be commended for it both here and internationally,” Professor Zelinsky said.

“But perhaps a less well-known example of how his leadership continues to have a lasting, positive influence on Australian society is his commitment to advancing research and expanding the funding for it as part of his economic approach.

“His legacy in this area of public policy positively impacts those of us in higher education every day and in turn delivers benefits to all Australians,” Professor Zelinsky said.

The Howard Government was responsible for establishing the Australian Research Council which administers the National Competitive Grants Program, a significant component of Australia's investment in research and development and has responsibility for Excellence in Research for Australia. His government also established the National Information and Communications Technology Research Centre of Excellence and was a strong supporter of research bodies including the CSIRO.

While unable to attend today’s ceremony, Ms Gillard will be recognised for her commitment to social inclusion, gender equity and education.

“Ms Gillard’s contributions continue to have a profound impact on the educational and life opportunities for people throughout our region,” Professor Zelinsky said.

“The historic reforms to universities achieved during her term as Minister for Education transformed access to higher education, particularly for students from low socio-economic status backgrounds. The introduction of the demand-driven system for university education represented a life-changing expansion of opportunity for students in the Hunter.

“I’m sure that many within our University community will draw inspiration from her ongoing dedication to education and gender equity, as it resonates so strongly with our institutional values,” Professor Zelinsky said.

In addition to Mr Howard and Ms Gillard, honours have also gone to Dr Bob Morgan and Ms Dianne Allen during this month’s graduation ceremonies.

Uncle Bob is a highly respected Aboriginal educator and researcher and the Chair of the Board of Aboriginal and Torres Strait Islander Education and Research at the University of Newcastle. He has been awarded a Doctor of Education.

Ms Allen, who served as a member of the University of Newcastle’s Council for more than a decade and currently holds the position of University Secretary, has been recognised as an Honorary University Fellow.

“Our University’s Indigenous track record is second to none and Uncle Bob’s contribution and counsel has been instrumental to this,” Professor Zelinsky said.

“And the leadership and mentorship that Dianne Allen has provided to our institution for more than a decade has been fundamental to our success as a leading regional university in Australia.

“The impact of their service cannot be overstated.

“I congratulate Uncle Bob and Ms Allen on this significant achievement and thank them for their dedicated service to our University,” Professor Zelinsky said.