In the 1970s and 1980s Margaret Henry wove her influence in to the lives of countless men and women wanting to learn the arts of university thinking. 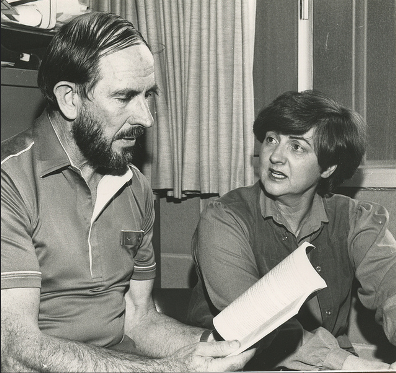 Margaret Henry, who died on Wednesday evening 9 September, worked for many years as a tutor and lecturer in the Department of History before moving to Community Programmes, later Open Foundation.

I first met Margaret when I joined the Department in 1975. She was one of  two academic women in History (the other was the local historian Sheilah Gray). The department then was a conservative academic establishment of mostly male colleagues, whose sense of the proper hierarchies that should underpin university life and teaching was offset by their commitment to free speech and to exposing students to as wide a range of historical interpretations as there were staff.

Margaret Henry used that regime and its freedoms to help subvert some of the more old-fashioned teaching techniques with one-on-one tutoring care. Margaret took me under her wing, without my asking, to help the transition to a heavy load of teaching across several history subjects. She, along with Sheilah Gray (they were a formidable team), tutored me in the latest thinking around Australian history that included new emphases on debates about Australian national 'character', feminist revisions of the lamentably under-researched history of women's roles in Australian history and the absorption of the newest research emerging on positive Aboriginal contributions to colonial and national history.

Margaret was always generous helping new colleagues and her students get up to speed. Her tutoring style was a revelation in an age where the lecturer mostly dominated small group discussions. Margaret taught two generations of staff how to allow student voices to be heard and to coax them into independent thinking, even if it came out uninformed. Teaching a mixture of young and mature students how to think, especially after she transferred to Community Programmes, and how to make the transition to university skepticism were Margaret's specialty. The university today rightly boasts about its equity and transition programmes – Margaret Henry was one of its flagship operators decades ago, in the 1970s and 1980s and wove her influence in to the lives of countless men and women wanting to learn the arts of university thinking.

She was the perfect example of the university citizen who would not rest just doing a ground-floor teaching role. She kept the university under constant scrutiny. Others can recount her interventions through the staff union on behalf of equity and work justice. I personally treasure her energy and organizing influence in ensuring the university took the younger members  of the History Department seriously when they demanded a say in the appointment process for a new Professor in the early 1980s. Margaret helped draft a well thought out memo on who should be consulted and what a new Professor should bring to the Chair after the retirement of the Department's inaugural Professor of History.

Margaret was an active citizen of both the university and the wider community. I still have an image of Margaret standing atop a pile of rubble after the 1989 earthquake, rallying her troops to stop and think what Newcastle might lose of its heritage if panic led the city's leaders to knock down everything that wobbled.  In middle age she had the energy and dedication to prosecute her mission for the city as a Councillor on Newcastle City Council, and she remained an articulate correspondent in the daily press, broadening her active life as citizen of university and city in a manner that stands out among her contemporaries. She was a model of what the University of Newcastle should expect in its alumni.

Margaret was a Tutor, Senior Tutor and Lecturer in Australian History (1968-1985) at UON. In 1984-1986 she was an elected staff representative on the University Council. From 1986 until her retirement in 1990 she taught in UON's Department of Community Programs. Margaret was a key proponent for the establishment of Wollotuka Institute in 1983.