Targeting the path of most resistance

Dr Ryan Duchatel, a Postdoctoral Fellow with the University’s School of Biomedical Sciences and Pharmacy, is on a mission to identify combination therapies that inhibit a rare but deadly form of childhood brain cancer. 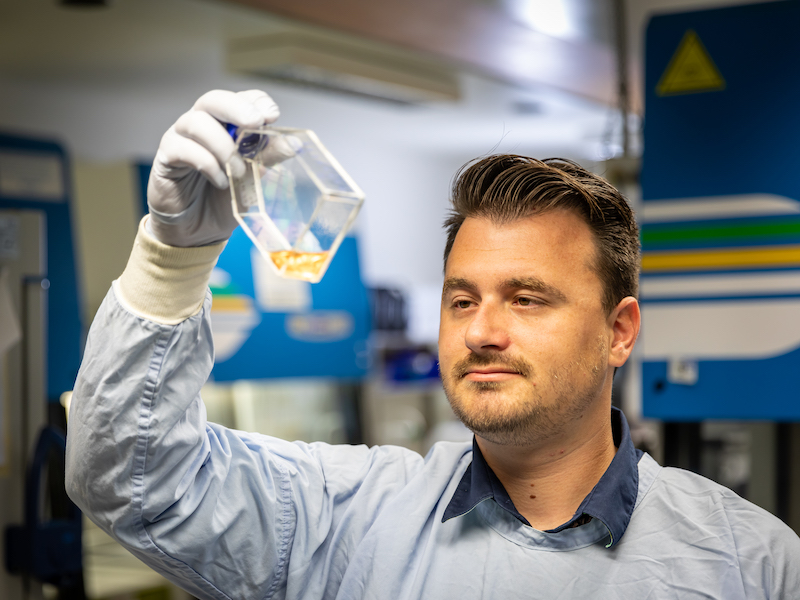 In the second half of 2017, Dr Ryan Duchatel was finishing up his PhD in experimental pharmacology with a focus on schizophrenia. Looking around for a new challenge, Ryan took a position beside established researcher Dr Matt Dun and turned his focus to fighting leukemia.

Soon after, the focus of Ryan’s new team turned to diffuse intrinsic pontine glioma (DIPG). A childhood cancer with a median diagnosis age of 6-7, DIPG has a 1% survival rate at two years from discovery, and is uniformly fatal. It manifests as a tumour of the brain stem, ultimately destroying messaging that controls movement, hearing, speech and finally, breathing.

Discovering that current treatment in the form of radiation therapy only offers transient, short acting benefits, Ryan set about developing new targets for chemotherapy based on identifying proteins that control how DIPG cells grow and survive.

Moving away from the scattergun approach of radiation therapy, Ryan is using proteomics to look for DIPG specific gene mutations and protein pathways to target with novel drug treatments.

Recent large scale sequencing studies on DIPG donor tumours have identified a genetic mutation called H3K27M, which drives disease initiation. This detection has provided vital clues as to which co-occurring protein pathways may be vulnerable to inhibition. Ryan is working on inhibiting one specific growth and survival protein pathway called Phosphoinositide 3-kinase (PI3K), which is over expressed in more than 80% of DIPG patients.

Perpetually aggressive, DIPG cells eventually adapt to the inhibitors, changing the proteins they use to grow, and bypassing pathways initially blocked by targeted drug therapies.

“Cells are able to make themselves resistant. But we are trying to identify those main drug protein pathways that cells can use and inhibiting all of their different options – essentially putting in roadblocks to their growth. Hopefully that'll one day lead to killing the tumours”.

From the lab to the clinic

Using donor tissue and animal models, Ryan examines the impact of combination therapies not just on the targeted cells, but the entire system.

“There are lots of different drugs that you can use to kill DIPG cells in a Petri dish. But that doesn't necessarily mean that they'll work in a patient. So, animal models work as our pseudo patients.”

To ensure the efficacy of possible treatments, Ryan also cultures cells to directly test the ability of combination therapies to cross the blood brain barrier, a physical barrier in the brain which prevents toxins, but also helpful chemotherapies, from crossing into the brain.

This work on new combinations of therapies is already being translated into clinical practice.

“The data we've got has helped put a PI3K inhibitor called paxalisib into clinical trials for DIPG in the United States. It was first developed for the use in an aggressive adult brain cancer called glioblastoma, but now those trials have seen paxalisib gain a rare disease designation by the FDA to treat patients with DIPG.”

Ryan has been instrumental in assisting Dr Matt Dun in the development of The Cancer Research Signalling Group at HMRI. Initially reliant on donations and support from global experts and local community such as local charity RUN DIPG (www.rundipg.org), and although still in its infancy, the DIPG program is already informing global therapies, sharing lab materials and data with the best fellow DIPG researchers in the world.

A close bond with the brain cancer community and awareness of the demographic he is working to save, means Ryan is more motivated than ever to pinpoint effective therapies.

Ryan credits Stanford University researcher Associate Professor Michelle Monje, who runs one of the largest DIPG research labs in the world, with facilitating their initial lab work through the donation of tissue samples and cell lines.

“Working on DIPG is an amazing collaborative experience,” Ryan explains.

“We get emails all hours of the night from different people all around the world. We share data and samples and compare results.”

“It's good to know via feedback from the international DIPG research community, that the research we're doing is on the right track to make a real difference.”

Targeting the path of most resistance

Dr Ryan Duchatel, a Postdoctoral Fellow with the University’s School of Biomedical Sciences and Pharmacy, is on a mission to identify combination therapies that inhibit a rare but deadly form of childhood brain cancer.

Dr Ryan John Duchatel is an Early Career Researcher, achieving his PhD in Experimental Pharmacology in November 2018. This work examined the neurobiology, and immune and genetic fingerprints underpinning schizophrenia contributing to the understanding of the development of schizophrenia, through alterations in neurodevelopment during pregnancy.

Dr Duchatel has since transitioned to the Cancer Signalling Research Group (CSRG) of Dr Matthew Dun as a Post-Doctoral Fellow, based at University of Newcastle, Hunter Medical Research Institute. A specialist in DIPG neurosphere in vitro modelling, Dr Duchatel belongs to a team of staff and students investigating the molecular mechanisms underpinning a rare and deadly form of paediatric brain cancer - 'Diffuse Intrinsic Pontine Glioma' or 'DIPG'. The group combines cellular and molecular biology techniques, in vitro and in vivo modelling utilising patient samples, together with high-resolution, quantitative proteomics. He leads the patient derived xenograft, in vivo DIPG modelling of the CSRG, necessary for translation of the group's pre-clinical findings to the clinical trial setting.

Dr Duchatel's current research project, in conjunction with field-leading DIPG research collaborators (Nazarian, Mueller - DIPG Research Centre of Excellence, Switzerland) investigates new and improved treatment strategies to overcome the limitations of current investigative therapies for children with DIPG. Primarily focused on inhibitors of cell growth pathways controlled by 'PI3K' (Phosphoinositide 3-kinase), this has led to the first, high-resolution, quantitative proteomic analysis of DIPG, and identified the compensatory signalling pathways activated in response to PI3K inhibition, which are now under investigation for clinical utility.

Dr Duchatel engages with both the scientific and lay communities to further the reach and relevance of his research. As the Deputy Chair of the Hunter Cancer Research Alliance’s (HCRA), Future Leaders Group, and member of the 2020 HCRA symposium committee and community engagement committee, his position affords him the opportunity to raise awareness and profile of cancer research. He serves on the scientific advisory committee of the Hunter Cancer Biobank, Australia.

Moving safe and well-tolerated therapies from the bench to the clinic for the treatment of childhood brain cancer$26,000