Sperm and sterilisation - UON students make it to FameLab

Two University of Newcastle PhD candidates in reproductive biology, Sally Hall and Samantha Young, have been invited to communicate their science at the FameLab 2016 New South Wales semi-finals at the Powerhouse Museum in Sydney on 7 April 2016. 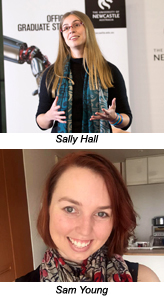 In just three minutes AND in a thoroughly entertaining way, Sally and Samantha will compete to explain both sides of the reproductive coin, with Sally presenting ‘pets not pests’ and Samantha ‘the science of sperm’.

Organised by the British Council, FameLab is an international competition to promote the world’s top early career scientists. Designed to inspire, motivate and develop young scientists and engineers to actively engage with the public and stakeholders, FameLab attracts over 25 countries every year.

Announced on the night, the NSW winner will go on to compete in the national FameLab final in Western Australia, with the overall winner of FameLab Australia traveling to the Times Cheltenham Science Festival in the United Kingdom, to represent Australia at the grand final.