Six University of Newcastle Alumni who completed the Colombo Plan Scholarship Program have received keys to the city in recognition of their work to promote Newcastle internationally.

The award was presented at a function hosted by The Australian High Commissioner, His Excellency William Hodgman and graced by The Honourable - Stuart Ayres, who is the New South Wales Minister for Enterprise, Investment and Trade and the Minister for Tourism and Sport, and his delegates including the Mayor of Port Stephens, Chair and CEO of Newcastle Airport to celebrate this momentous occasion. 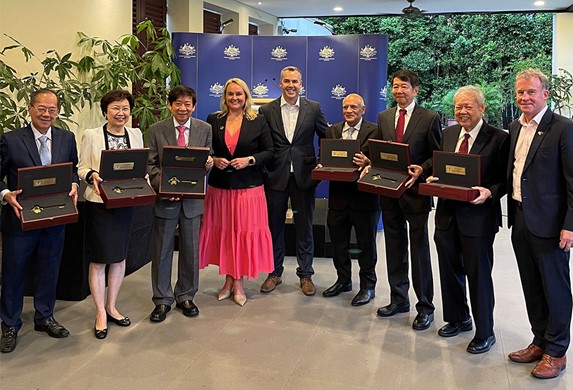 “This honour is wonderful recognition of the contributions of these six outstanding individuals and their strong ongoing connections to the University of Newcastle and our region. We are grateful for their ongoing support and friendship, and the strong bonds they have helped build between Singapore and the City of Newcastle,” said Vice-Chancellor Professor Alex Zelinsky.

The Ambassador Program highlights the efforts of Novocastrians, across all sectors, both residing in Newcastle and other parts of Australia and the world, in promoting Newcastle City, as well as to give promotion to those in the community who work without recognition or acknowledgement.

Professor Tony Travaglione, CEO said, "As the wholly owned entity of the University of Newcastle, Australia; Newcastle Australia Institute of Higher Education is proud of this honour that recognises the long-standing relationship and contributions of these outstanding individuals who continually supports the endeavours of the city of Newcastle since their days as a Colombo Plan scholar and involvement in the Singapore community."