A roadmap to engineer or breed the next generation of crops for high productivity and resilience to climate change has been laid out by a team of world experts.

The scientists, including Professor Yong-Ling Ruan from the University of Newcastle, have published findings and insights that identify key biological bottlenecks that limit plant productivity and therefore crop yields.

The research, published in Nature Plants, critically analysed existing information, including the authors’ own research, and found what the team believe to be crucial information for the future of agriculture production.

Professor Ruan said that as agriculture faced a massive increase in demand given the dual pressures of a booming population and environmental deterioration, it was essential to understand the biological processes that regulate resource and energy distribution in the plant body, thereby allowing the identification of key gene targets for genetic engineering and breeding.

“Plants naturally evolve with a multitude of strategies to adjust their growth according to external and internal signals. They adapt to changing environments, such as drought, to ensure the survival of their species,” said Professor Ruan.

“However, in agricultural ecosystems, these natural responses and adaptions may actually limit crop yield, as they often prevent plants from realising their greatest yield potential.

“What we have discovered are some of the barriers that can limit plant growth and reproduction, which puts us in a strong position to achieve a major contribution to meeting our dramatically increasing demand for food.”

Professor Ruan said the reason the findings of the team’s study were of such importance was due to projections that we will need to double world crop yield by 2050, feeding more people with less arable land.

“Add the need for more food to the increased incidence of global warming-associated drought, salt and heat stresses, plus pathogen and pest infections; means that futureproofing plants through modification to make them more productive and resilient is paramount to our survival,” said Professor Ruan.

“By lifting source and sink activities to their maximum through genetic editing, massive yield increases can be foreseen, potentially closing the future yield gap resulting from an increasing world population and the transition to a carbon-neutral economy.” 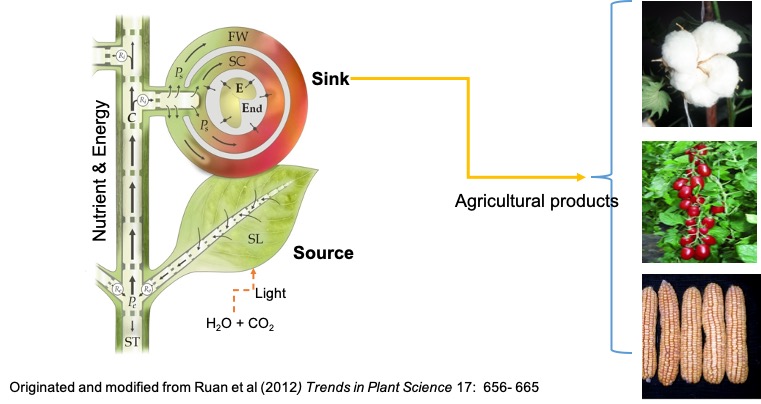 Using potatoes and cassava plants, along with other species such as tomato, rice and cotton as models, researchers identified a suite of genes and proteins that limit a leaf’s ability to efficiently use solar energy to make assimilates (mainly sucrose), and the translocation to and use of the assimilates within sink organs, such as seeds, fruits and roots.

In identifying these bottlenecks, they also discovered the signalling molecules and regulatory genes that trigger or initiate the growth of sink organ – what determines how many seeds, flowers or fruit a plant might grow.

As a leading expert in the source-sink field Professor Ruan’s role in this research was to provide a critical assessment of the current knowledge on the processes controlling sucrose import into sink organs of major agronomical significance (seeds, fruits, flowers, cotton fibres etc). The analysis identified key targets for genetic engineering and breeding in crops such as tomato, wheat, legume and cotton.

In his most recent research findings, published online in Plant Physiology, Professor Ruan has demonstrated that invertase in the cell wall matrix provides essential sugar signals to the placenta in the floral organs to form ovules, the precursors of seeds.