OPINION: Recognising racism must be the starting place for reconciliation

The house I live in is on Darkinjung country. The backyard blends into the dense bush of the National Park. There is a bush track that leads up a steep hill to the ridgeline. The track leads to a marked Aboriginal site, where water still pools in grinding grooves.

The rock platform is cracked and worn, but the faint outlines of petroglyphs, ocean creatures etched into the rock, are still visible. These markers are physical traces of the world’s oldest living culture. The outline of the carvings is gradually disappearing back into the sandstone.

These traces have made their mark in me. They speak to me of deep, sharp injustice. Understanding the violence and cultural destruction Aboriginal and Torres Strait Islander people suffered through colonisation is unfathomable.

Dispossession of Aboriginal and Torres Strait Islander people from the land and separation of families and cultures were the preconditions which enabled the country we now call Australia to be created. How can that ever be reconciled? 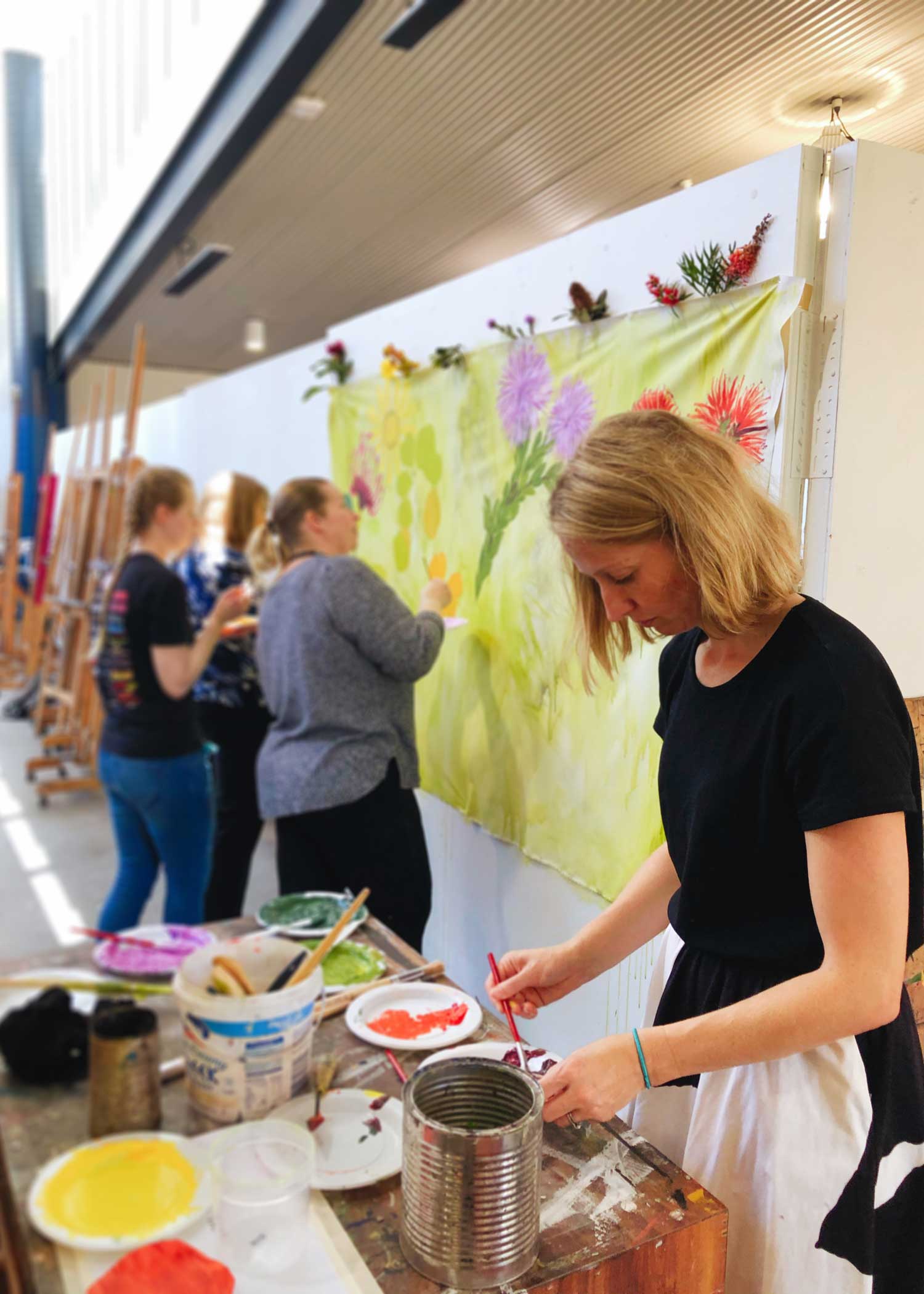 I first learned about Aunty Bronwyn through my four-year-old, who came home from preschool one day telling me all about the Darkinjung people. ‘They are the land, the sea and the sky people, mummy.’

Aunty Bronwyn Chambers is Elder in Residence at the Wollotuka Institute at the University of Newcastle’s Ourimbah campus. Aunty Bronwyn had been sharing stories, songs, and teaching Darkinjung words to the children at KU Preschool on University campus where I work on the Central Coast.

When I saw an event on campus advertised which included her, I wanted to go along to hear her stories and be a part of the community. The art project was the highlight of my week for each of the four weeks it ran. We were given an introduction to Aboriginal and Torres Strait Islander art styles. We learned about the ways patterns, symbols, were the outcomes of connections to particular places (and much more diverse than ubiquitous dot-paintings).

We were encouraged to look at the land, the plant and wildlife, our feelings of connection on campus. “Work with that”, Aunty Bronwyn told us.

We were proud of the collaborative mural we created. Aunty Bronwyn said, “I was overwhelmed by the pride shown by the students and staff for the Central Coast Campus who contributed to the collaborative art project. All participants demonstrated the utmost respect and enthusiasm, which is evident in the beautiful artwork that depicts their place of study, work and perfectly represents Darkinjung Country to them.”

My journey towards understanding is still only new. In this country, where Aboriginal and Torres Strait Islander knowledge and justice is so deliberately marginalised and sidelined, efforts to learn and to act as an ally, can be a fraught and individual pursuit. In the face of such overwhelmingly large injustice, brutality, and violence – at all levels of society, culture, and institutions – where can a white person begin?

By looking at their own history, identity, privilege. We must locate ourselves before we do anything else. Before we even begin to approach reconciliation, as a nation, we must confront and name the racism and white cultural domination upon which Australia was created.

Individual efforts towards reconciliation are valid and important, but they must be grounded in an understanding of racism, and precisely how and where it happened – in the local places we work, live, and places we visit. The Massacres Map, created by Professor Lyndall Ryan at the University of Newcastle, is a searing visual of the scale and breadth of our colonial violence.

If we don’t address systemic and structural racism, we will allow injustices to continue. Recent Aboriginal deaths in custody, including in our local region, speak of an enormous, systemic problem. If we start from the position that Aboriginal and Torres Strait Islander inequalities are caused by racism, we will seek to create structural and institutional changes through establishing Treaties, recognition of Sovereignty, Land and Water Rights, increasing political representation and power, and holding people in positions of authority to account. The Uluru Statement from the Heart sets out the structural reforms needed to fundamentally shift the way that this country engages with Aboriginal and Torres Strait Islander people.

This National Reconciliation Week’s theme is ‘More than a Word: Reconciliation Takes Action’. Personal actions supporting community efforts geared to calling out the systemic causes of inequity are a good place to start.