When he’s not teaching in a classroom or working on the land, Ryan O’Neill gets lost in his imagination, creating the lives of Rand Washington, a racist science fiction author, or Rachel Deverall, his own fictitious, late wife.

Ryan’s latest book Their Brilliant Careers has been shortlisted for the Miles Franklin award, and with prize money of $60,000, it’s Australia’s most significant literary prize.

“To make the shortlist is very surreal, I still can’t quite believe it.”

Ryan, originally from Glasgow, came to Australia 13 years ago and has embraced both Australian literature and the Australian way of life. He has settled on a farming property near Wingham, NSW, and is a lecturer and tutor in Newstep and Open Foundation, in the University’s English Language and Foundation Studies Centre.

“After I came here I really immersed myself in Australian literature and its rich literary tradition so Australia has been great for my writing.”

“I had a couple of stories published in Scotland years and years ago, but it’s since coming to Australia that my writing has really taken off.” 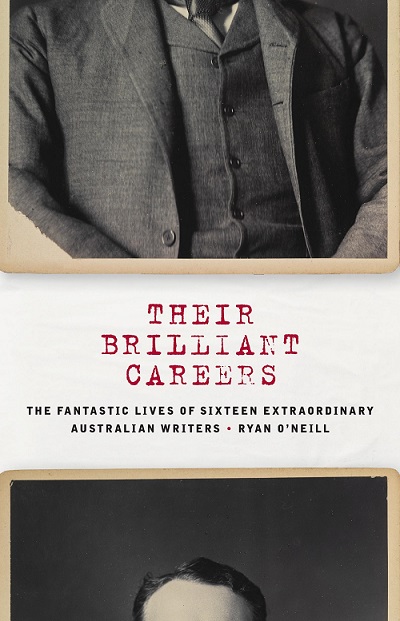 The short-listed satire, Their Brilliant Careers is a series of 16 biographies of invented writers whose lives intersect with each other, and also with real Australian writers such as Henry Lawson and Banjo Paterson.

“It’s an alternate history of Australian literature in the last 150 years, told through the biographies of these 16 writers,” Ryan said.

“What I enjoyed most about writing this book was finding the connections between the characters from different areas of Australian literary history and finding ways for them to interact.

“One character in the book might have been a rival of another, or even murdered one of the other characters and got away with it. It was really fun finding those connections and creating an overall story.”

In addition to crafting his favourite character, Rand Washington, a racist science fiction writer who succumbs to a punishment fitting for his evil deeds, Ryan also enjoyed writing himself into this novel as ‘Ryan O’Neill’ – in inverted commas – a bitter and envious writer who dedicates the book to his late wife Rachel Deverall.

“I really enjoyed the idea of putting myself in there and playing with readers’ expectations,” he said.

However, his creation has seemed a little too real for some.

“One of my friends in Scotland who I hadn’t spoken to in a while, bought the book and thought that I had divorced and remarried, and my second wife had died. I had to tell him, ‘No, it’s all made up!'"

“The book is sometimes shelved in the non-fiction section of book shops, I’ve found it there a couple of times, so maybe I’ve made it a little too convincing.”

The real Ryan O’Neill is married to Jenni, a Newcastle native he met in Vietnam, where they were both teaching English. They have two daughters and a desire to live a sustainable life surrounded by chickens, horses, sheep and cows.

Ryan’s successful and flexible career enables him to fulfil his other passion, teaching. He commutes to UON weekly to teach in the English Language and Foundation Studies Centre, a position he has held for seven years.

“UON is great environment to work in. It’s very supportive. I usually work three or four days a week during semester so I drive down for a couple of nights, which is quite handy so I have other time to write,” he said.

“I work in the enabling program supporting students who didn’t have the opportunities or the marks to get in to uni, and helping them to achieve their goals of getting into their undergraduate course.

“I really enjoy running into my former students years later and seeing how they’re doing in their degrees. Some have even gone on to do PhDs, which is absolutely fantastic.”

You can read more about Their Brilliant Careers and order Ryan’s book here. The winner of the Miles Franklin award will be announced on 7 September 2017 at the State Library of NSW.