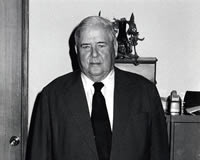 One of three buildings constructed in time for the University's commencement in 1965, the McMullin Building originally housed Arts, Economics, Commerce, Administration, and the University's fledgling library. It is named after Sir Alister McMullin KCMG, Hon DLitt (1900-1984), the University's first Chancellor, a position to which he was elected in 1966 and from which he retired in 1977. Sir Alister is the longest serving President of the Senate — the upper house of the Australian Parliament — occupying the position from 1953-1971. 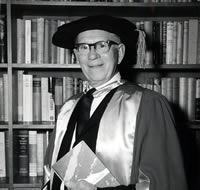 Griffith Duncan MA, Dip Ed, MEd, FACE, OBE (1914-1988) was the Principal of the Newcastle Teacher's College, now — after incarnations as the Newcastle College of Advanced Education and the Hunter Institute of Higher Education — amalgamated with the University of Newcastle, from 1949-1975. A Hunter local, Duncan's twenty-six years of guiding teacher education in Newcastle were preceded by experience as a High School teacher in Mathematics, Science and English. He supervised the growth of the Teacher's College from an institution housed in a half-finished High School at Broadmeadow, offering two-year courses in Primary teaching, to one housed at Callaghan, offering courses in Secondary education with a wide range of specialisations. 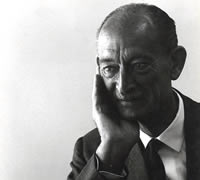 Edwards Hall was the first on-campus student accommodation at the University of Newcastle, and was completed in 1972. George Alfred Edwards, after whom Edwards Hall is named, held degrees from Oxford in Arts and Science, and was the Managing Director of Courtaulds in Australia. He was responsible for the development of their imposing industrial complex at Tomago, just north of Newcastle. He was a prominent member of the interim council responsible for planning the development of the University of Newcastle from 1962. In 1966, he was elected as the autonomous University's first Deputy Chancellor. 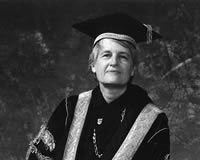 Founded in 1990, Evatt House is named after the Hon Elizabeth Andreas Evatt AO (1933-). Evatt is a pioneering jurist; she was the first Chief Justice of the Australian Family Court, a position she held from 1976-1988 — the first woman to preside in an Australian Federal Court. She was also President of the Australian Law Reform Commission from 1988-1993. Elizabeth Evatt was appointed as the University's third Chancellor in 1988, occupying the role until 1994. 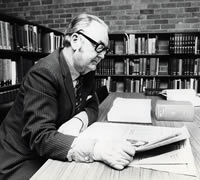 Professor James Johnston Auchmuty CBE, BA, MA, PhD (Trinity) DLitt (New), DLitt (Syd), (1909-1981) was the foundation Vice-Chancellor of the University of Newcastle. He was instrumental in its development from a University College administered by the NSW University of Technology to an autonomous university in 1965. The library was named in his honour in 1974. Before his retirement in 1974 the Professor could, whenever in Newcastle, be found in the library from 11.30 until lunch, researching, reading The Times, or chatting with staff. He was a bibliophile who advanced the growth of the library at every opportunity in the straitened circumstances following autonomy. 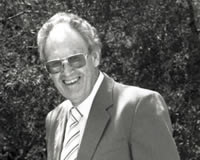 Opened in 2002, the Birabahn building is located on the land of the traditional Indigenous owners, the Pambalong clan of the Awabakal nation. The spirit of Birabahn the eaglehawk, which is the primary totem of the Awabakal people, is reflected in the design of the building. An aerial view reveals the roof span as the wings of the eaglehawk outstretched and soaring over its traditional lands. Birabahn was also an Aboriginal scholar in the early nineteenth century. He was widely admired by Europeans for his intellectual ability and fluency in the English language, and was awarded a brass plate by the Governor of the colony for this skill. Accordingly, the name Birabahn reflects the long tradition of Indigenous scholarship.

One of the newest of the on-campus residences, and named from an Awabakal word meaning "a bright place to live", the building's name demonstrates how Indigenous languages can be incorporated into contemporary settings as a reminder of the traditional Indigenous owners of the land, the Pambalong clan of the Awabakal nation.