A passion for excellence and discovery

Drawing on innovation and his diverse interests, Professor Kevin Hall is contributing to the University’s global research success. 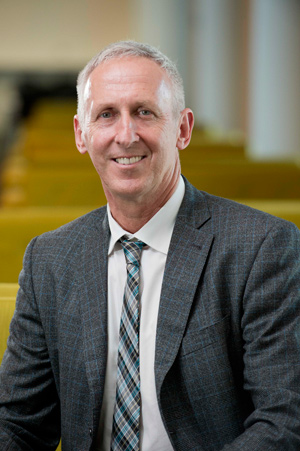 The University of Newcastle is a research-led university built on the foundation of discovery and access to new knowledge. At the helm of this discovery is Professor Kevin Hall, an accomplished civil engineer and the University’s Deputy Vice-Chancellor (Research and Innovation).

“I have the best job on campus,” he acknowledges.

"I’m lucky to have a hand in nurturing the careers of some of our boldest and brightest."

It’s gratifying being able to bring in the next generation of experts and watch them grow as articulate, empathetic and inspiring thinkers and doers.

Running his own hydro technology company for seven years between his undergraduate and PhD studies, Kevin has been a visionary from the very beginning. Designing a handful of the world’s most beautiful and mechanically sound harbours, marinas and beaches before undertaking a PhD at the University of New South Wales, the Canadian native didn’t expect to “enjoy” research so much.

“I saw it purely as a business advantage,” he confesses.

“Not many engineering consultants had their doctorates in the early 1980s.”

“During my candidature I concentrated on measuring waves and understanding how they propagate through coastal structures, such as breakwaters.”

Deciding not to return to the corporate realm after receiving his award in 1986, Kevin joined Canada’s Queen’s University. As somebody who likes to be involved in a “variety of things,” he undertook research in a number of different areas.

“For a long while, my primary area of strength was numerical modelling, which uses equations and other mathematical techniques to represent natural processes,” he explains.

“A national event involving pathogens caught my attention however, and expanded my focus.

“A number of young and elderly people died because of a particular strain of e. coli bacteria that was present in the public drinking supply in a small town in Ontario.”

Collaborating with a team of physicists, biochemists and mechanical engineers, Kevin looked to construct an automated pathogen detection system to “ensure this wouldn’t happen again.”

“The project led to a start-up business that we built up over three or so years,” he recalls. “It was then sold to a French water consortium.”

Dually exploring water quality and its impacts on health, Kevin’s multidisciplinary effort also prepared him for successful partnerships across a number of sectors ranging from public health to coastal protection.

Kevin relocated to the University of Guelph in southwestern Ontario in 2008, signing on to become its Vice-President (Research). Though conceding the executive role to be a “one and a half time job by itself,” the distinguished educator and innovator affirms he still made plenty of room for research.

“For the past 20 years I have been working in the urban slums of India and Africa where there is no infrastructure, sanitation, or fresh drinking water,” he conveys.

“Adapting relatively simple, effective and low cost technology, my team has helped the women in these communities design and implement equipment that is easy to use and will provide fresh drinking water at the household level.”

“The hope is that they will make a business and sell the units to the areas adjacent to them.”

“It is very meaningful research and it has a lot of impact – which you see right away.”

Kevin returned to Australia in March 2014, accepting the position of Deputy Vice-Chancellor (Research and Innovation) at the University of Newcastle. Continuing to work with his head and lead with his heart, the sharp strategist admits this newest role is as demanding as it is rewarding.

“I’m an enthusiastic and vocal supporter of our researchers,” he shares.

“One of my main responsibilities is to promote their efforts to local communities, state and federal politicians, businesses and non-government organisations, and international institutions.”

“Getting to know what we’re doing here on campus is a really cool part of the job.”

Kevin is also pushing the frontiers of a burgeoning academic arena – interdisciplinarity.

“By being made aware of who’s investigating what, I can link people together, like our powerhouse respiratory medicine network with scientists from the Hunter Valley, Sweden, Britain, North America and Singapore,” he affirms.

“Australia is moving more and more into an ‘Innovation Agenda,’ which will see us use knowledge to drive the economy and buffer ourselves against some of the global crises that are occurring around commodity prices.”

“This, by default, means we need to start working in teams of varying skills and professional fields.”