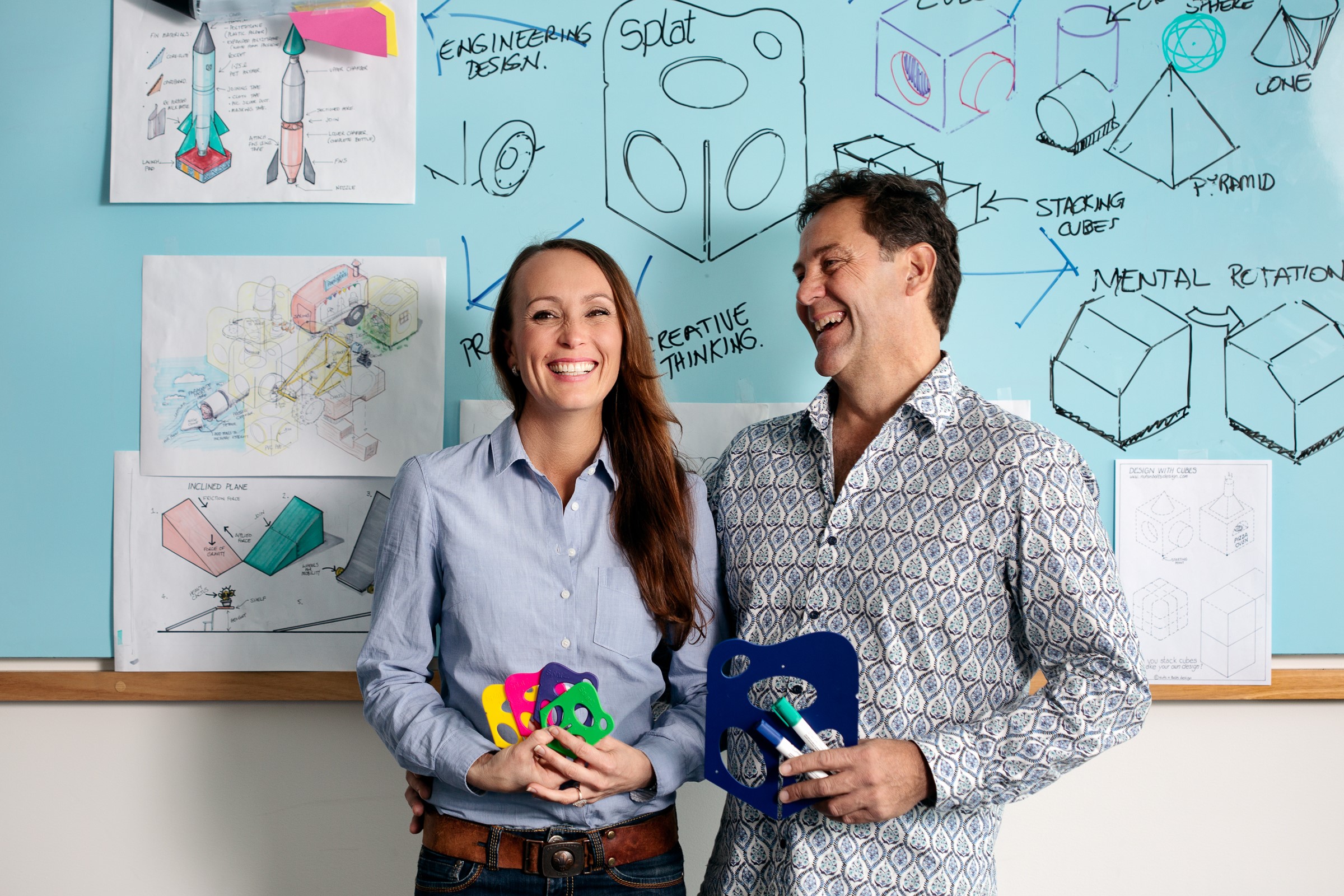 She and her husband, Glenn Lawrence, have spent years working with children of all ages, which has helped them realise a gap in spatial reasoning education.

“When I was completing my Master’s Degree in Education & Information Science, I discovered this gap. I couldn’t find suitable resources to develop visual spatial ability, and that’s what started the journey,” she says.

Prior to being a teacher, Kylie was an education consultant in media strategy and product development. Glenn, like her, previously worked in industry before he also became a teacher. He was an industrial designer, and now he’s an Engineering Studies teacher based at Whitebridge High School. When Kylie’s not working on her startup, she’s working in the libraries department at Hunter Valley Grammar School.

“Drawing is a learnt skill,” Kylie says. “Imagine if you never got taught the alphabet, never learnt to read from left to right. If you never got the basics, you’d never be able to progress.”
The lack of options in the education system is what led to the evolution of Splat, a tool which helps students draw three dimensional shapes and understand how to use shapes for engineering design. Unlike so many modern educational devices, the Splat requires no battery, screen nor electricity. It’s manufactured in Australia and made of recyclable plastic.
The couple invested $5,000 of their own money to develop a minimum viable product over a six month period; she and Glenn prototyped it at home on a 3D printer. This is a junior tool; they have a prototype for a more complex tool. And they have big plans beyond this.

“Our end goal is to offer a scalable digital program in the education space which helps students develop their design skills and visual spatial abilities,” Kylie says “Drawing in 3D is one of the top three ways to improve spatial awareness, and spatial reasoning is the number one predictor of success in STEM. You need it for careers such as medicine, engineering, spatial computing and architecture."

She said many students are slower to develop their visual spatial ability today because kids don’t play and manipulate things the way they used to; they’re now more digitally dependent, as are adults. By the time schools start connecting design skills and spatial reasoning, it often misses targeting students at an optimal time developmentally; as visual spatial skills are best developed in the early years.

The Splat is mainly for children, starting at kindergarten age, but they’ve been contacted by hobbyists as well as university lecturers. It sparks imagination in different kinds of people.

Kylie has always wanted to do something creative. Her fascination with information and products goes back to her mum, who she describes as a “guru of domestic engineering.”

“She was always developing some sort of silly prototype to fix something around the house. We used to call her MacGyver,” Kylie says.

Together she and Glenn have five children, so their experience as parents and their broad backgrounds are helping them advance their ideas, with assistance from the local innovation ecosystem as well.

Both attended an Ideas Collider including high school student participants. They received some 'tough love' and  insightful advise from visiting entrepreneurs, hosted by the Integrated Innovation Network (I2N). Glenn attended the Immersives in customer Discovery and Business Model Canvas, which gave him more confidence and understanding as to how to develop as a startup. I2N connected them both to a community of like-minded people in the Hunter.

“That was around the time that we had gone to Engineers Australia for their endorsement of the Splat and we were just coming up with our business plan. The I2N course really helped confirm that we were on the right track,” Kylie says. “What the dedicated team at I2N are doing to support local innovation is amazing! It’s incredible and there is no vested interest for them. That’s what I took away from it: here are some really genuinely interested people offering valuable help.”

Kylie and Glenn are seeking funding to grow the business. By the end of this year they plan to pre-sale their 'Five For Design' initiative, a membership option for schools which would supply them with short, ongoing design drills to help develop spatial ability in students. They currently have 100 lessons prepared, and that’s just the foundation stage.

But her work is ultimately focused on young girls. She said that when girls are correctly taught spatial ability early on, they perform just as well as boys. “The number one cognitive difference between boys and girls is often spatial ability, and it’s a learnt skill,” she says. “My youngest daughter is definitely an inspiration.”

Start your innovation journey this Winter with I2N Navigator. Expressions of interest close 3 May!