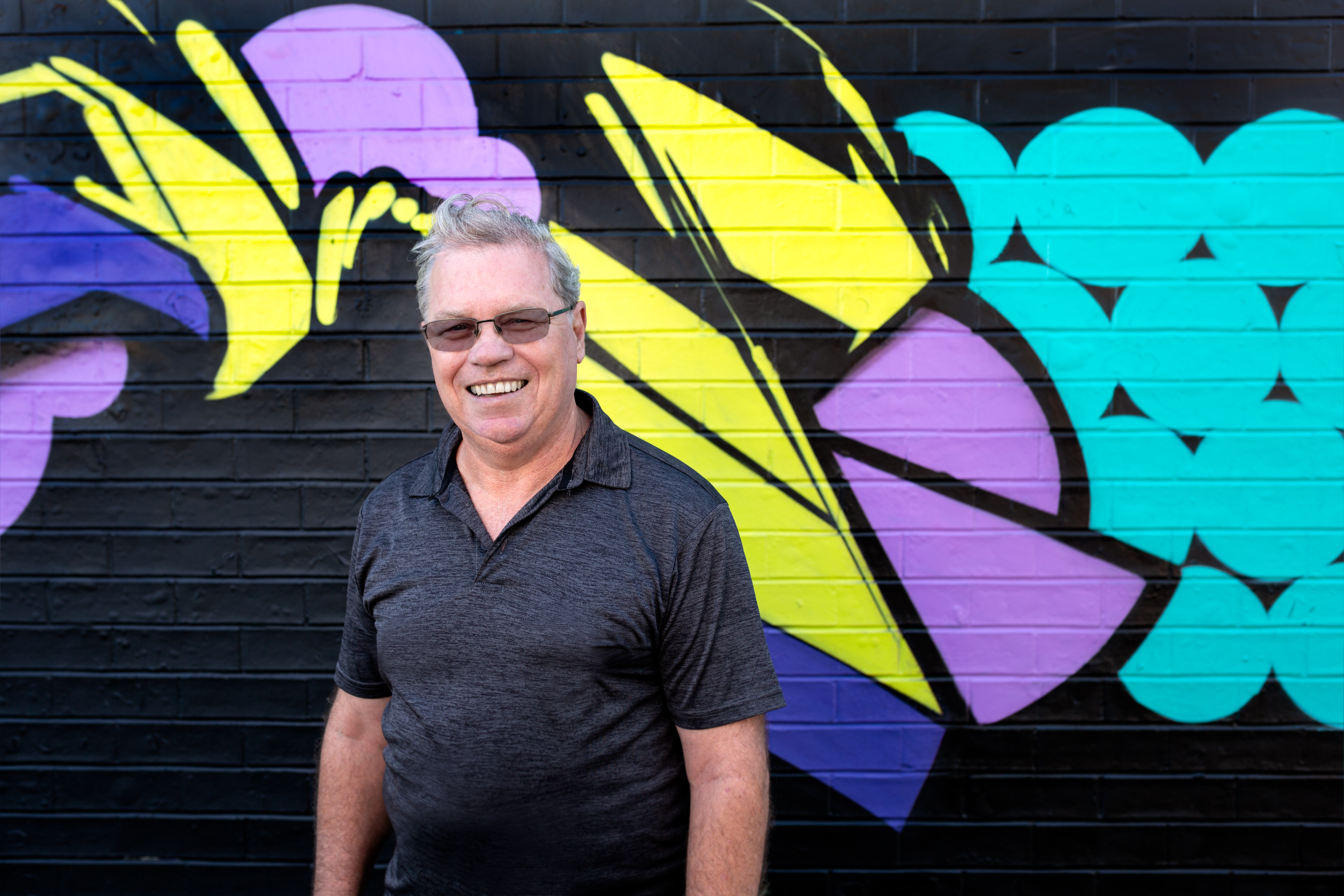 Peter Tippett has taken big risks, won big, lost big and then done it all again. He’s founded multiple startups and is currently coworking out of the Integrated Innovation Network (I2N) Hub on Hunter Street.

His latest venture is a cyber security company called CyberBUND. Despite developing software to strategically stop hackers, he’s also a staunch believer in the power of good people and community. His Achilles heel is trust, always has been.

“I trust. I always look at the good in people. And it’s something inherent. My wife and I grew up in a rough part of South Auckland; our boys went to primary school opposite Hell’s Angels headquarters. Growing up, Mongrel Mob’s Headquarters was over the back of my Dad’s business. We grew up around an environment that’s based on ‘your word is your bond’. If you lie, you lose your kneecaps. Trust is built into our DNA,” he says.

Trusting people has served him well. He’s a fitter and turner by trade but working in his family’s engineering business led him to his career in startups, software and people. His first startup was an accounting software called Sapphire which he built in Auckland, and this brought him to Bondi Beach where he lived for 20 years.

“Sapphire was my first real business, and it’s still in business today. It’s an enterprise resource planning product for business on Mac and Windows,” he says.

Sapphire taught him to understand small business. After Sapphire the founder of a legal software company called LEAP sought him out.

Then Peter joined iPowow! as technical founder which he describes as “real time opinion on a TV screen.”

“We started in the Political market with the worm on video, but pivoted to Live TV. The ex- Director of National Geographic saw the worm we were doing on Video and asked ‘could we do it on live TV?’ I did a proof of concept a week later,” Peter says.

‘The Worm’ changed the way people saw television; for the first time they were able to interact with it.

The Worm went on to present all over the world. Peter travelled to the US, where The Worm was adopted for television shows like The American Music Awards.

“We succeeded with that, and then we did Ms. Universe in Brazil in 2011. That’s when we did numbers no one had seen before: 65k votes per second, 23 million votes in nine minutes from people all around the world,” he says.

“iPowow! showed me the world of Silicon Valley. It taught me about high volume data which is another key function of my current business,” he says.

In 2015 he raised about AU$3 million dollars for a private messaging service for small business.

“That burnt me out. So my wife and I moved up here with the dog to Stockton. It’s nice and quiet,” he says.

He joined I2N’s co-working space in June of 2018 to focus on consulting work.

“In August 2018, I sent an invoice to a client. That invoice was intercepted and my bank details were changed. My $21,000 went to another bank account. The client still paid me, but I saw an opportunity to fix a problem,” he says of CyberBUND.

The client’s email system had been compromised by a Russian group. They modified his invoice PDF. Fortunately with his background at LEAP, he understood how it had happened.

“I researched the problem. Saw how it was done. It’s a cyberattack area that the FBI values at $US23 billion dollars in lost money over the past three years, so serious dollars. I’m working on a way to solve it. I created a product that worked with the accounting platform Xero. It took me until April 2018 to make a serious go of it. I didn’t want to get into another startup, but working at I2N I was encouraged to give it a go,” he says.

Since then, his cofounder from iPowow! joined him at CyberBUND and Xero have approved the product

It always comes back to community. When he lived in Bondi, Peter learnt about the power of community while serving as a volunteer lifesaver and Surf Lifesaving Club Director. Here, he recently became a Director at Hunter IF, a not-for-profit startup support organisation.

He works out of I2N three days a week. He loves how connected I2N is to the startup scene and he praises the I2N coordinators for promoting him and connecting him to the right people and events. His startup experience and willingness to give-back to the community opened up the opportunity for him to become a mentor as a part of the I2N’s Venture Mentoring Service program.

“It’s a team of 2-4 mentors meeting with a venture at the same time to work through the founder’s challenges. We all have different views, experience and ways of doing things. Instead of having one view and thinking it’s right, the founder gets multiple points of view and can determine for themselves which aspects apply to their situation to help determine an action plan,” he says.

He also likes that I2N is agnostic to the University of Newcastle.

“People ask me, ‘How can you be there? You never went to uni there. You’re an outsider.’ But it’s a proper co-working space. Everyone thinks it’s only for university students and staff, but they’re actually for the whole community,” he says.

Peter has found the definition of community is often misinterpreted.

“If you give you will be surprised about what comes back. If you take you don’t ever get. That’s what being involved in the lifesaving community taught me. Too many people want to be part of something to get something out of it,” he says. “Community is not about that, community is about giving.”