The history of the University of Newcastle, as for all great universities, has been characterised by leaders who have been willing to challenge the status quo and transform fields of education and research.

Since its foundation, the staff, students and leaders of the University have introduced unique ways of thinking and operating that have led to remarkable outcomes. 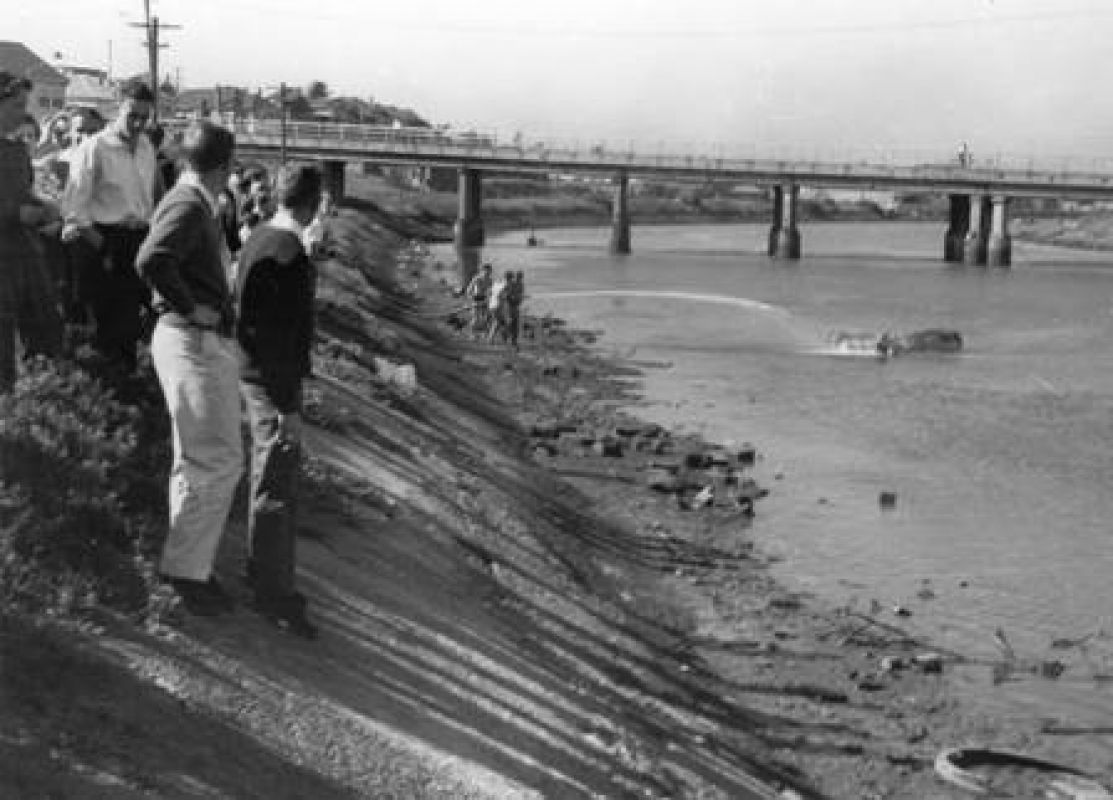 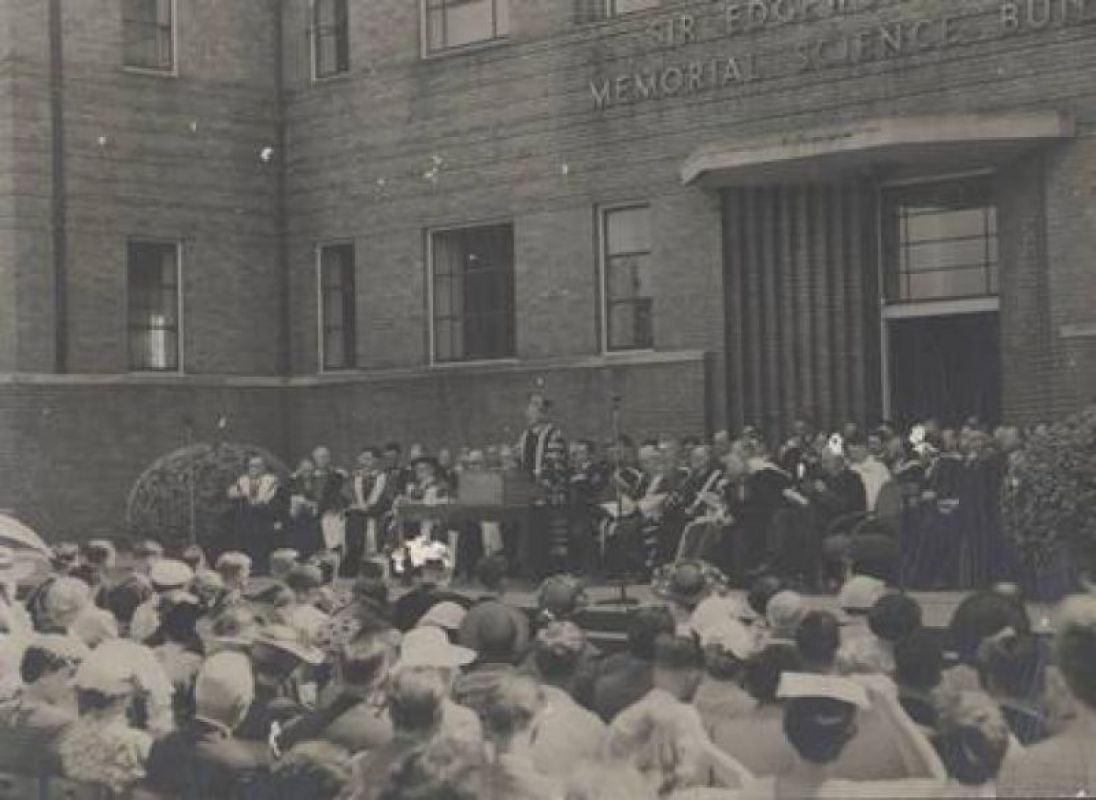 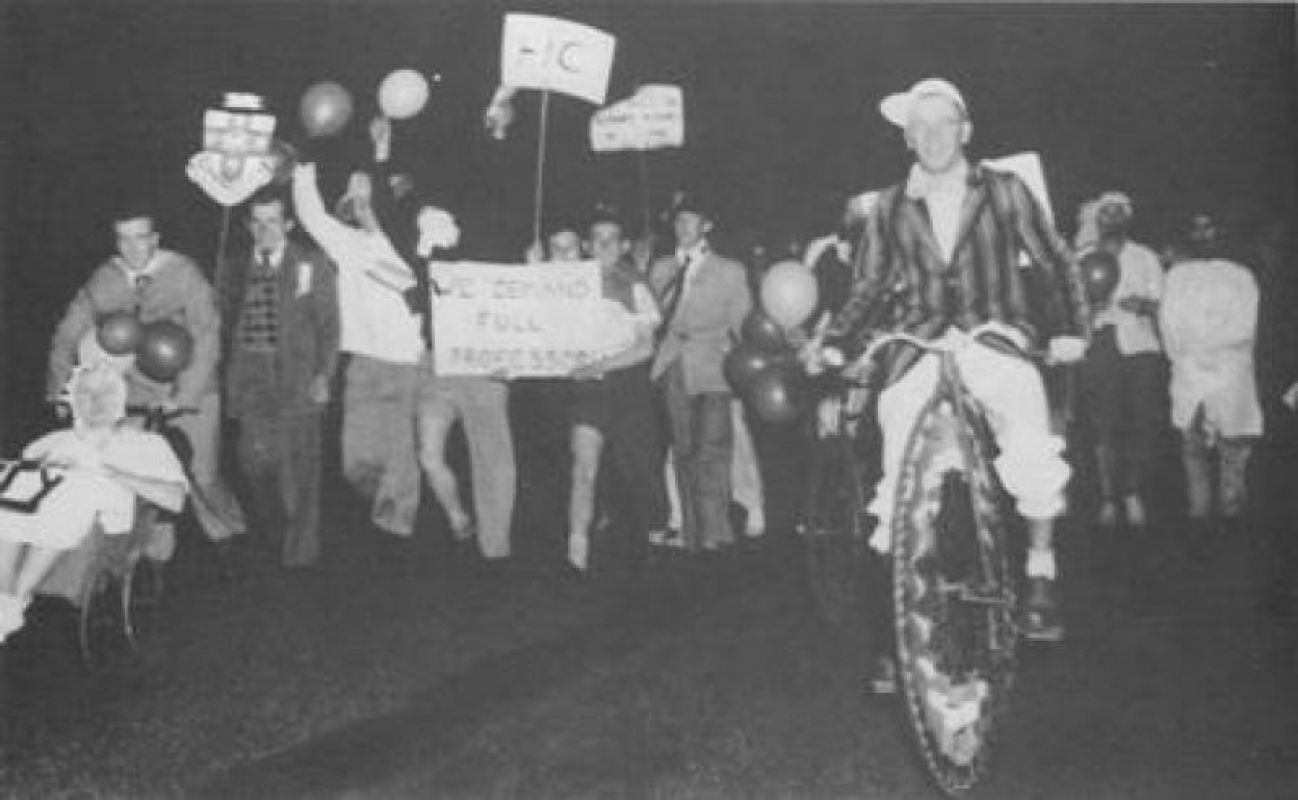 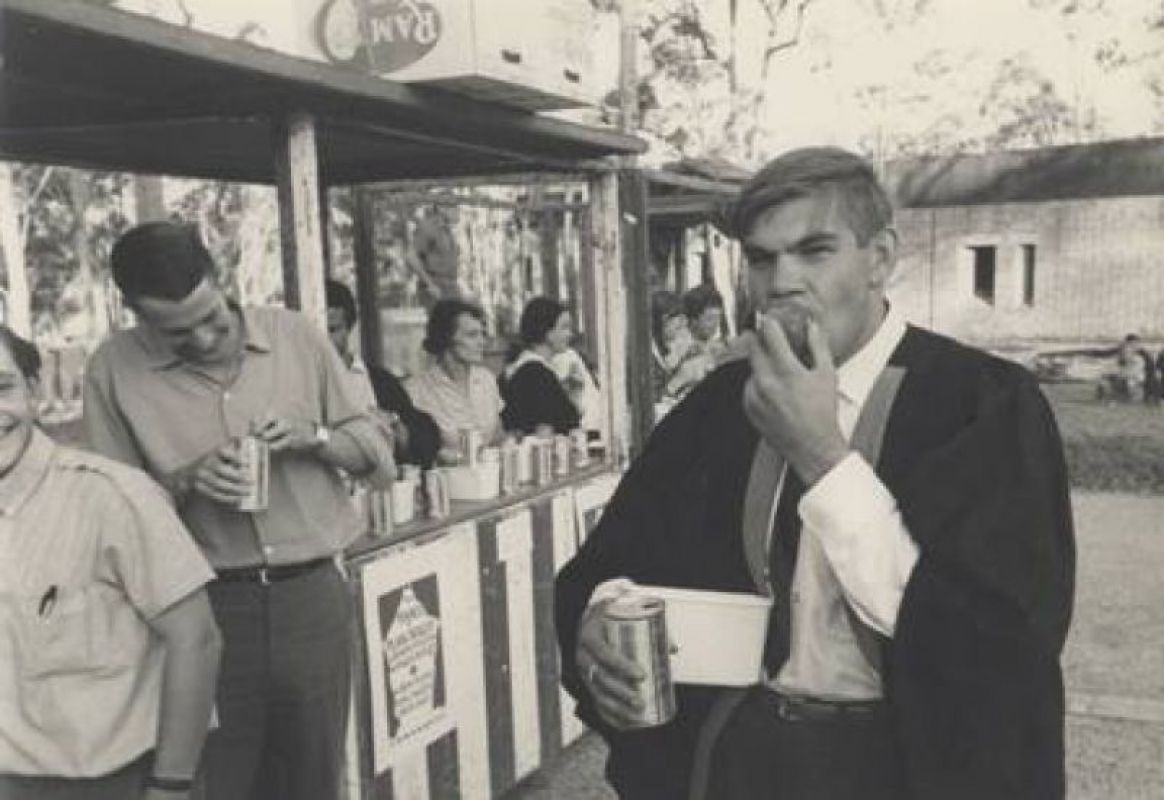 Lord Mayor’s Committee for the Establishment of an Autonomous University of Newcastle inspecting the Shortland site, circa 1962.

It was located at Tighes Hill—on the same site as the TAFE NSW Hunter Institute, then known as a Technical College. The staff and students of the Newcastle University college shared cramped conditions with their Technical College colleagues. Space was at such a premium that one lecturer's office was his car; another lecturer, Dr Beryl Nashar, was accommodated with a flimsy partition in the typing pool.

The community had campaigned for a University since the 1940s. While the Newcastle University College offered a university education in the region, the community wanted more. They campaigned throughout the 50s to get it.

In 1962, the Vice-Chancellor of UNSW, Sir Philip Baxter, finally relented. Work began on transforming the fledgling college to a university in the full sense. First graduation ceremony for the autonomous University of Newcastle, 1966. 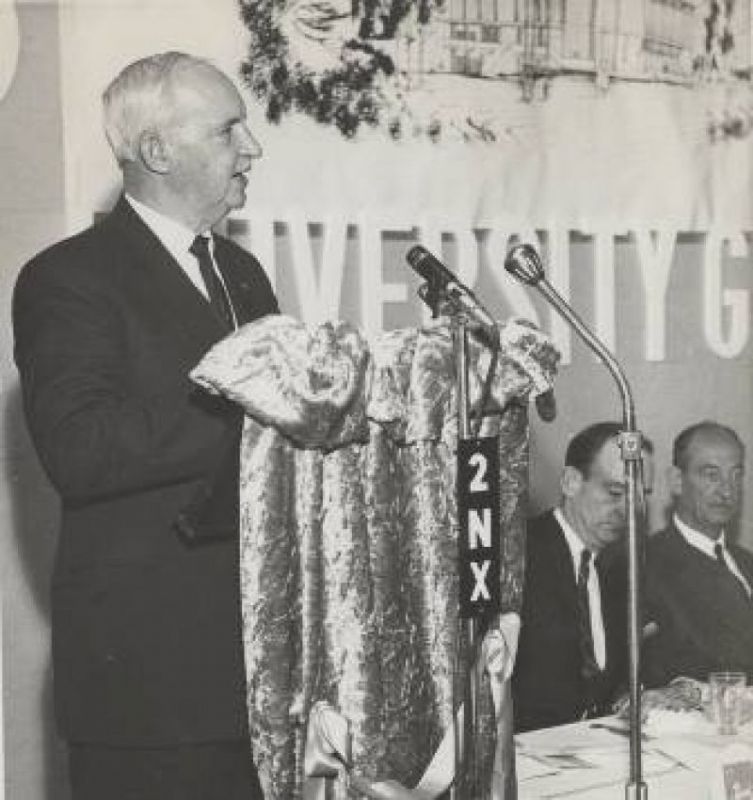 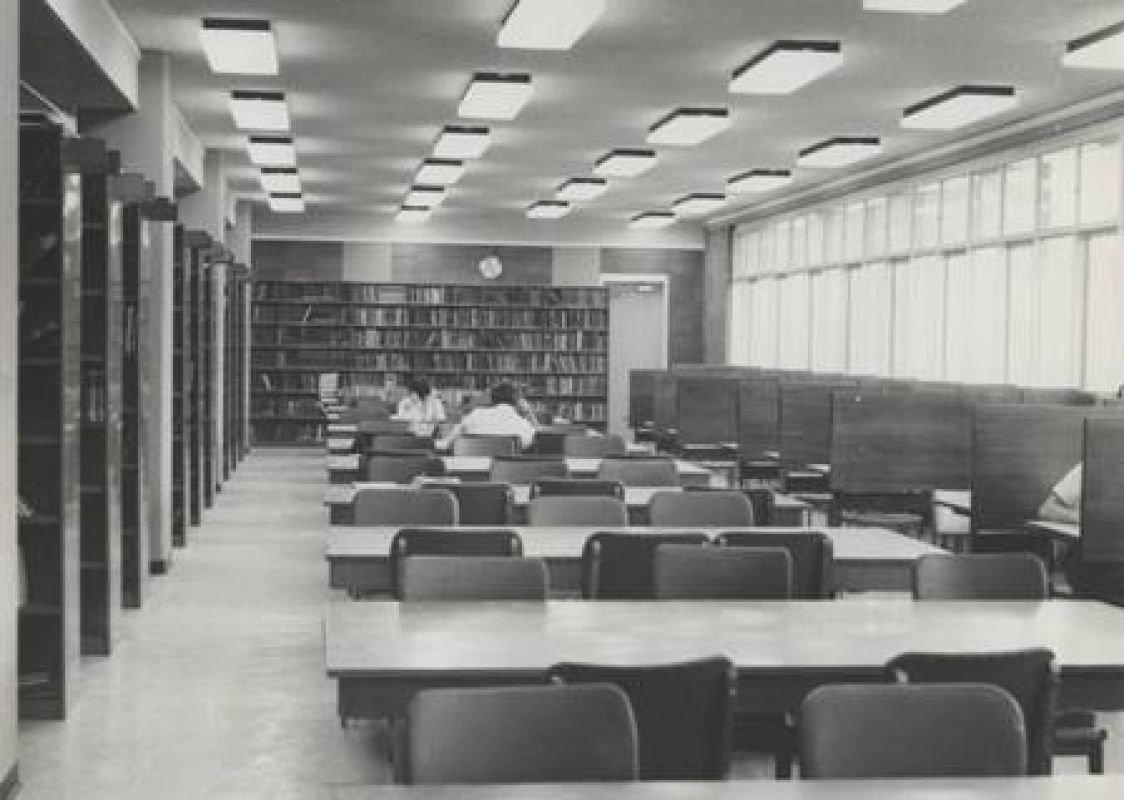 University Library, then housed in the McMullin Building, 1966. 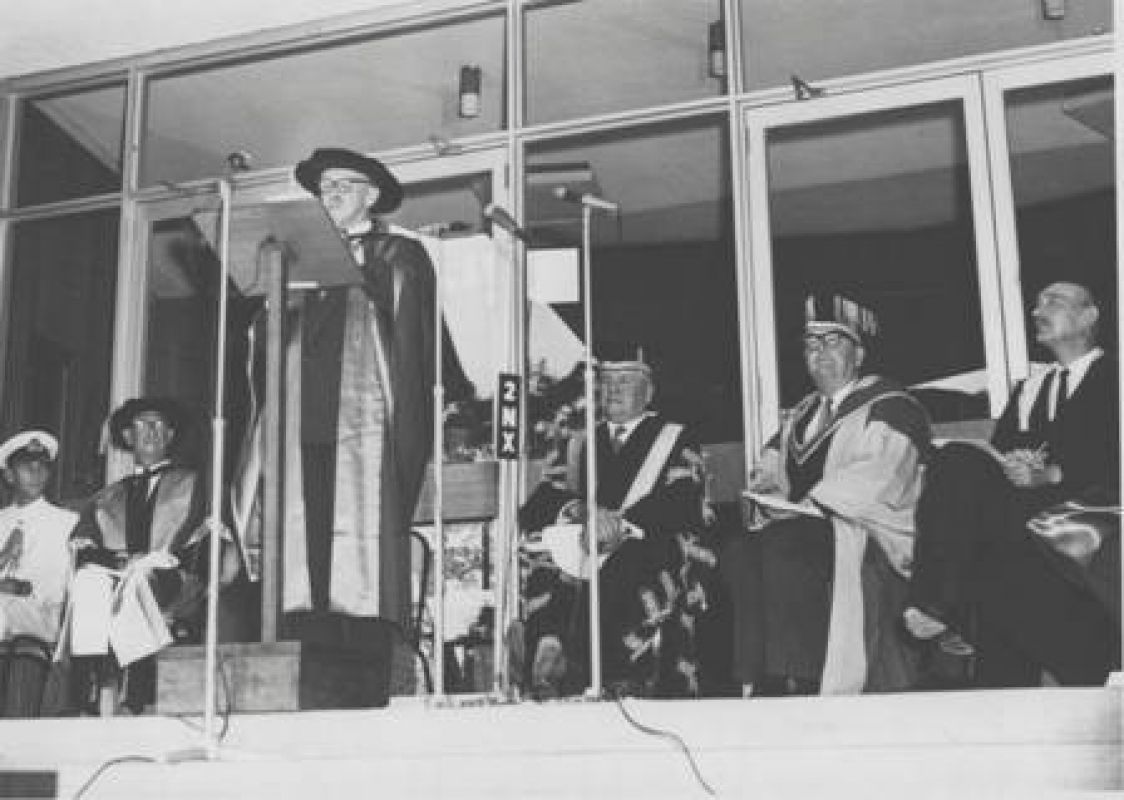 Official opening of the McMullin Building, the first building completed on campus. Lord Casey at the lectern, George Edwards to the left; Chancellor Sir Alister McMullin, Vice-Chancellor James Auchmuty, and Bryn Newton John to the right, 1967. 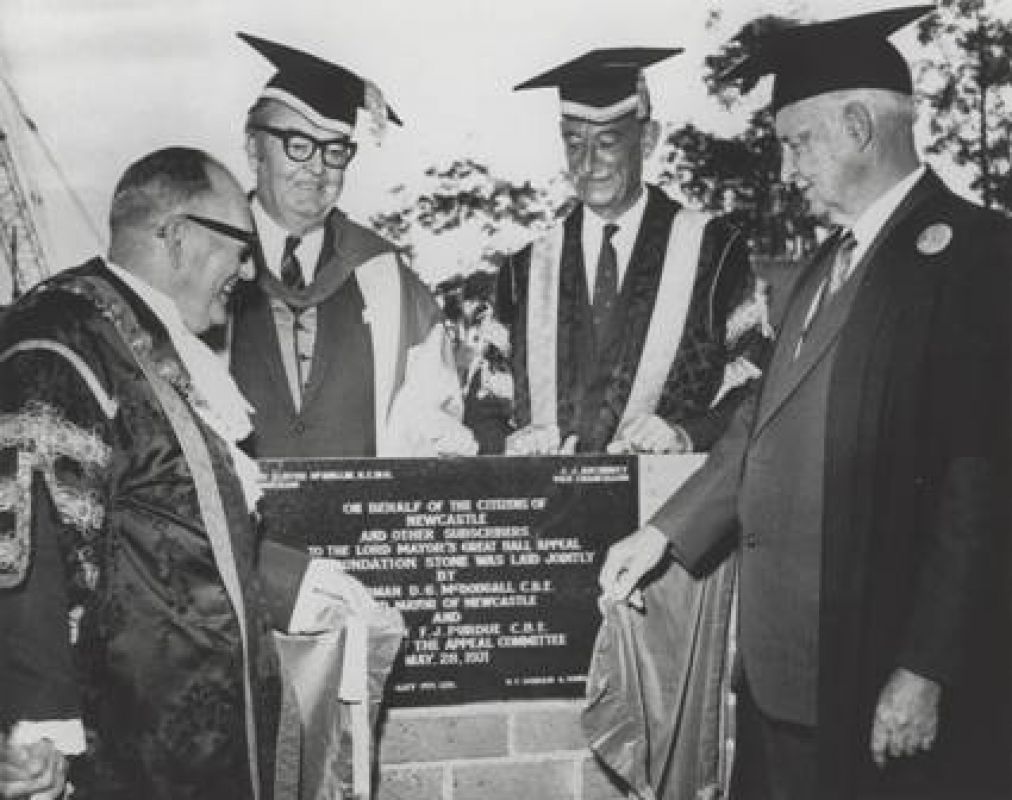 In late 1964 the University of Newcastle was granted autonomy by the NSW parliament. It became an independent university in 1965.

Work began on the Shortland site. Other locations had been considered for the University—the Watt St Mental Hospital among them—but the government settled on a patch of bush ten kilometres from town. Early indications were not auspicious: Warabrook was then the home of the Newcastle abattoir; Shortland Waters Golf Club was a rubbish tip; illegal games of two-up and rough pony races were held on the site.

But those who began to build the University had a clear vision: a bushland campus that blended a traditional university with innovative approaches to the problems with which they were faced. They wanted a University that stayed connected to the community that had campaigned for its creation.

The construction of the Great Hall demonstrated this community connection. It was funded largely by the community. Former Newcastle Lord Mayor Frank Purdue spearheaded a fundraising campaign. Community members 'bought a brick' to build the Great Hall. In 1971, the Foundation Stone was laid. 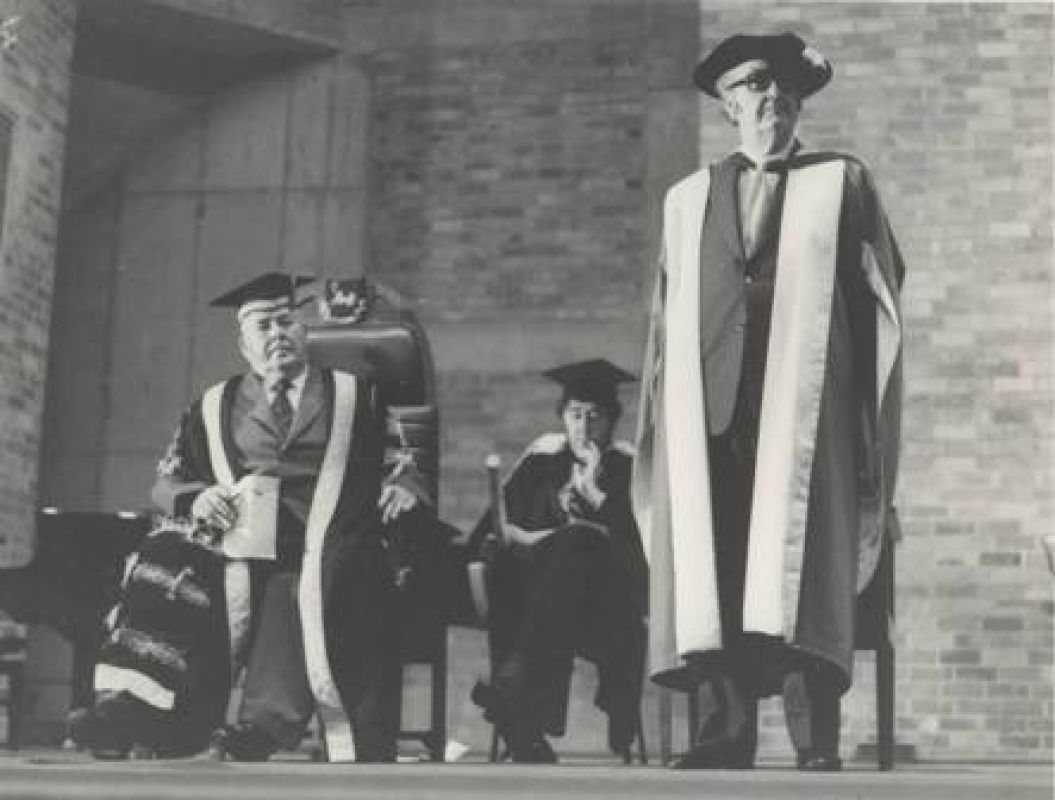 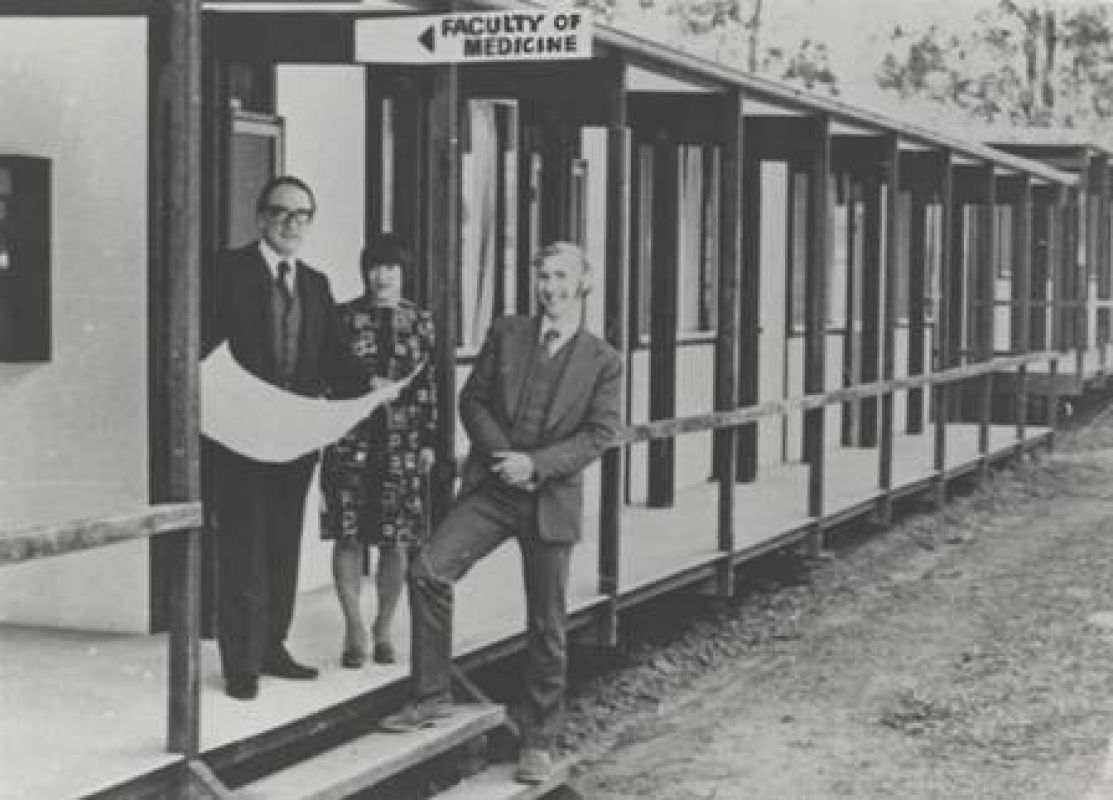 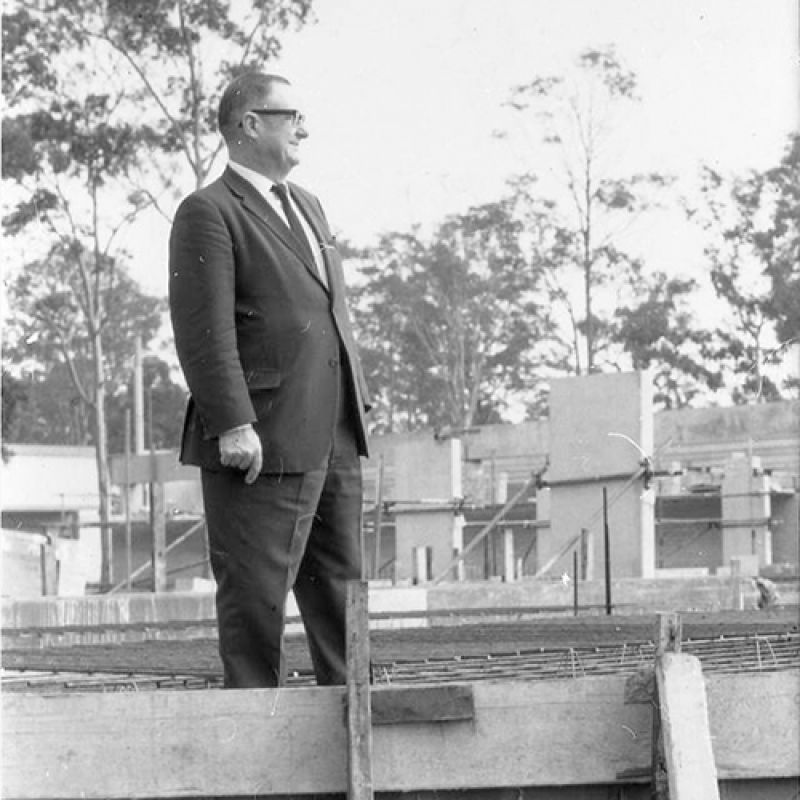 Early 1970s Principal of the Newcastle College of Advanced Education, Griffith Duncan, at the site of the Hunter building. At the end of 1974, James Johnson Auchmuty, the University's Foundation Vice-Chancellor, retired. It ended a twenty year association with tertiary education in Newcastle and began a new era. He was succeeded by Don George, who inherited a much larger University and the challenge of shepherding an innovative medical program to maturity.

One of Auchmuty's last acts as Vice-Chancellor was to oversee the hiring of Professor David Maddison as Foundation Dean of Medicine. He was poached from the University of Sydney—at that time the most prestigious medical school in Australia—with the promise of a free hand to create an innovative medical program.

Maddison toured the world to investigate new approaches to medicine and returned with a three principle approach that would revolutionise the teaching of medicine in Australia and, eventually, abroad: patient-centred medicine; problem based learning; alternate pathways to entering a medical degree.

The medical program accepted its first students in 1978. David Maddison died before he could see the fruits of his efforts: the first medical students graduated in 1983.

While medicine and biological sciences were desired additions to the growing University, other expansions were unwanted. In 1981 the Fraser Federal government attempted to force the amalgamation of the University and the Newcastle College of Advanced Education (NCAE). The NCAE was located across the creek from the University in what is now known as the Hunter Building. The two had grown almost in parallel under two giants of education: Auchmuty at the University and, at the NCAE, Griffith Duncan—after whom the Grif Duncan Theatre is named.

After protests and a change of government, the forced amalgamation slipped off the agenda, for a time, in 1983. 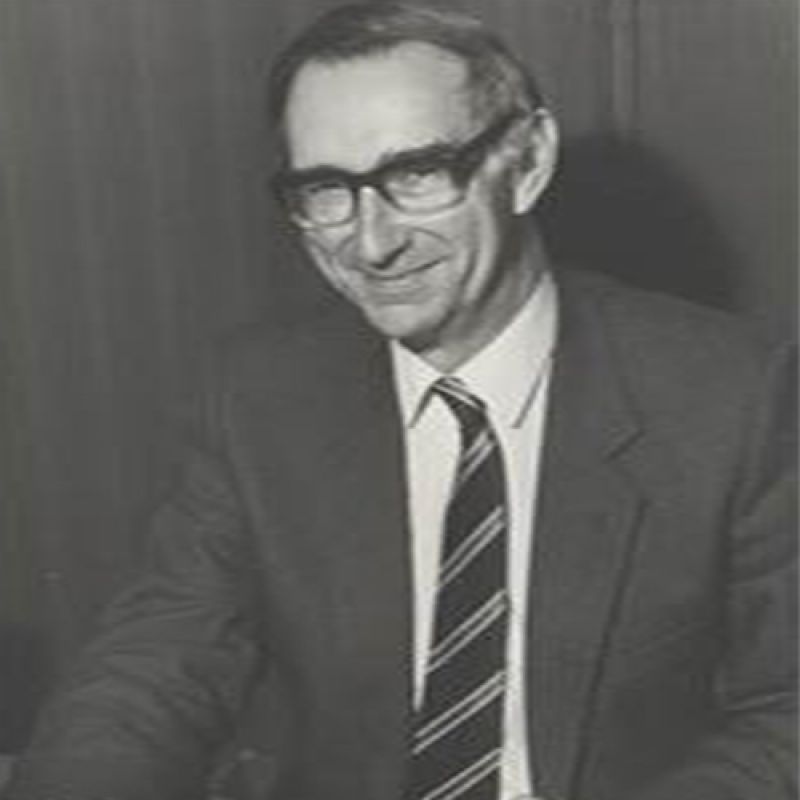 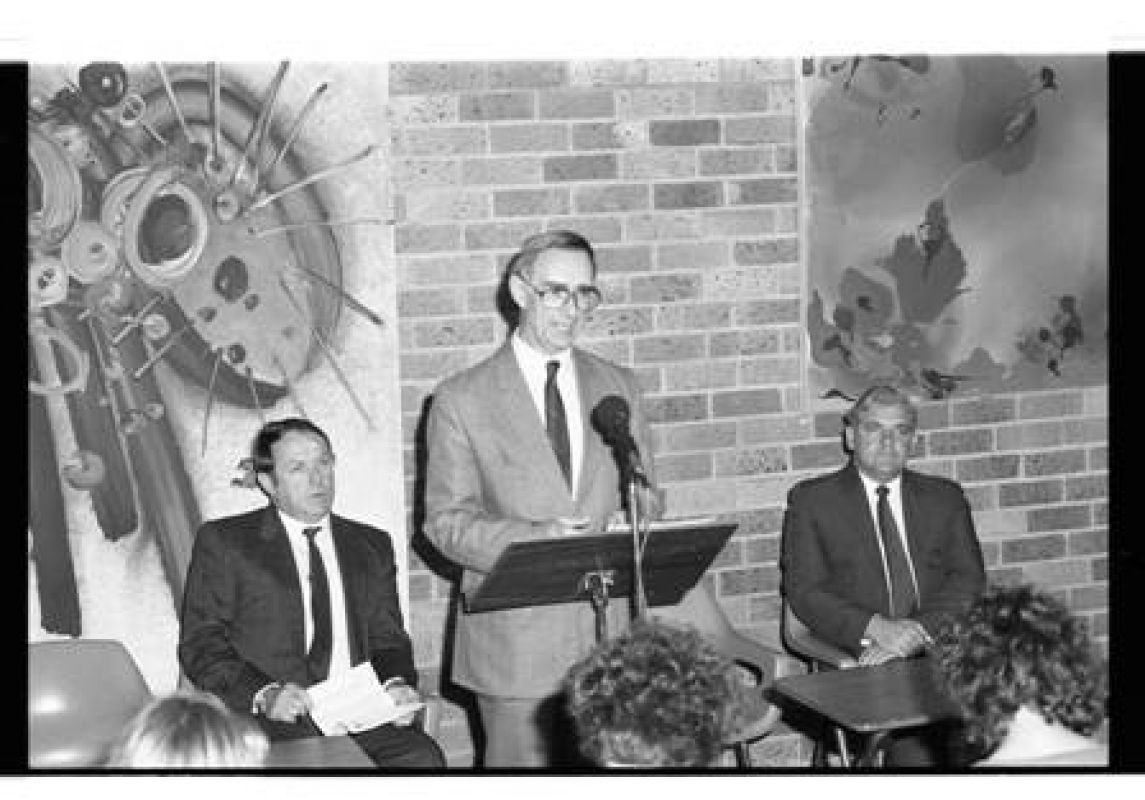 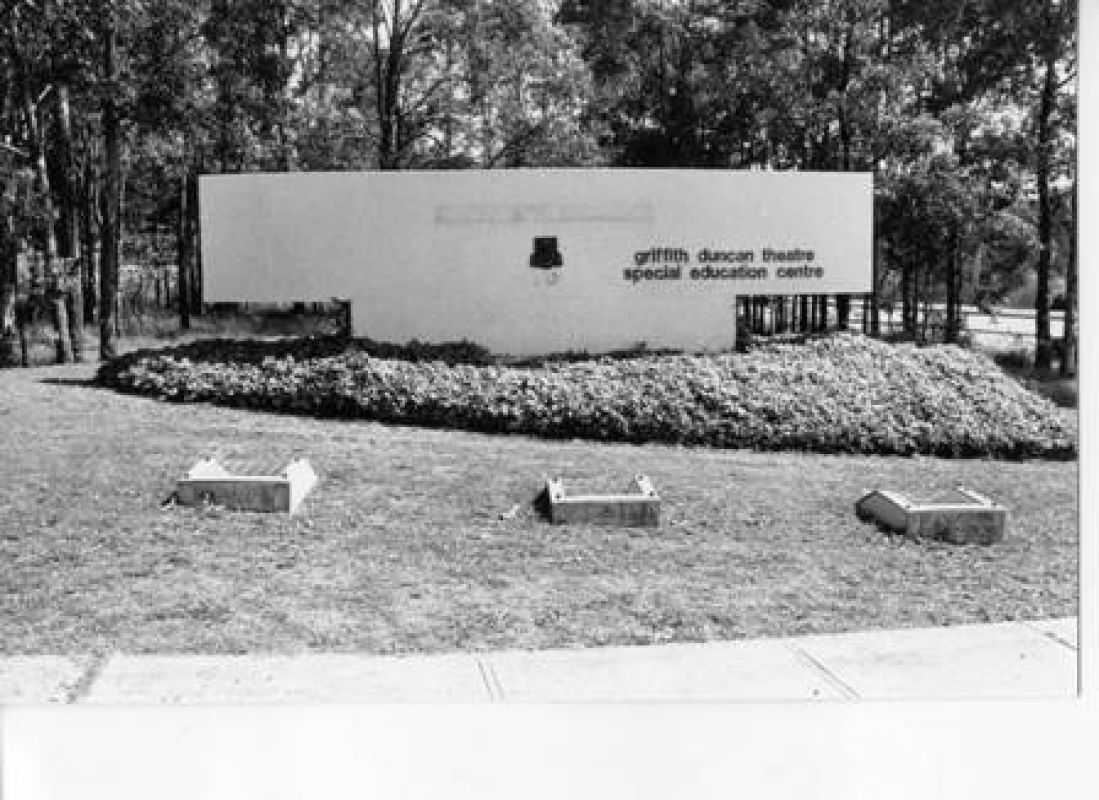 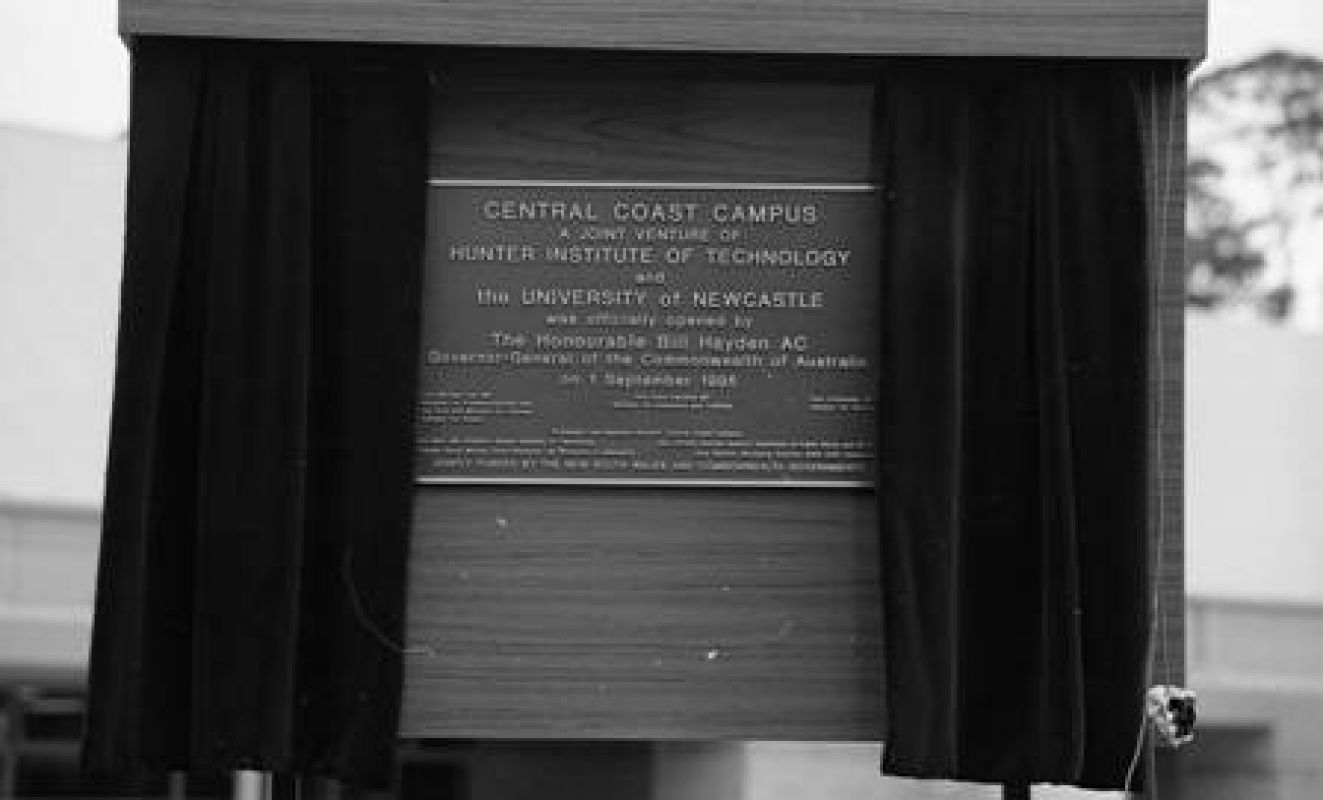 Memorial plaque for opening of the Central Coast Campus, 1995.

By 1989 universities across Australia were being driven to reform by the Federal Government and tight economic conditions. After a long and sometimes bitter negotiation, the University and the NCAE amalgamated in 1989. Husbanding the change fell to the third Vice-Chancellor, Keith Morgan. At the time, many feared that the University would be diminished by joining the NCAE, or vice versa. In retrospect, both institutions were strengthened in a new University of Newcastle, one focussed on combining academic rigour with vocational excellence.

The University took its final step to a full complement of disciplines when it opened the Newcastle Law School in 1992. Much like the medical school, its pioneering foundation Dean, Neil Rees, created a School that was focussed on community-centred advocacy. The new Law degree incorporated a clinical legal placement that has been emulated across Australia.

In 1995, the Ourimbah Campus was officially opened. 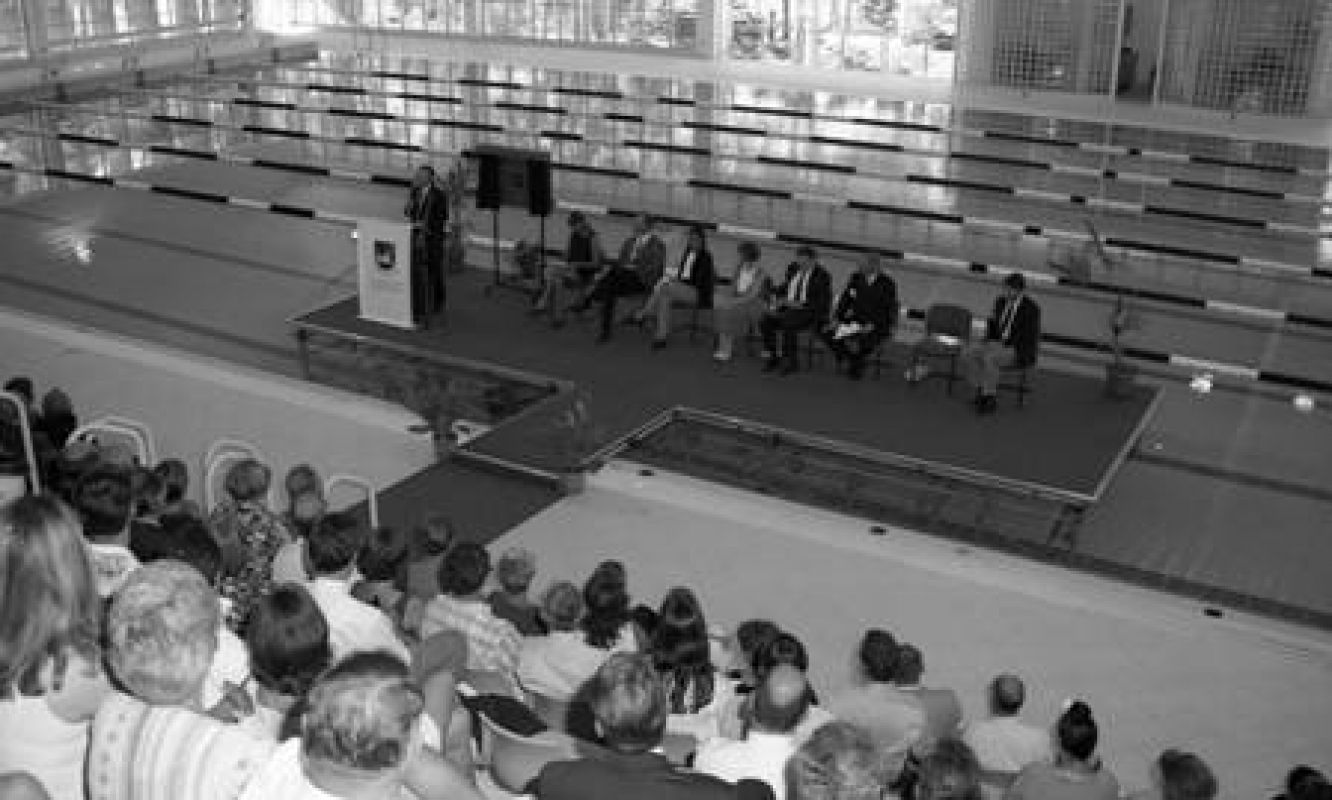 This period of the University's history has seen fundamental changes to the technologies with which we teach and the nature of student experience. In 1997 The Forum was opened. At the time, it was the largest gymnasium in the area. In the early days of the University, team sports, particularly Rugby, were popular. The Vice-Chancellor and other senior staff members rarely missed a game, always showing up in the University colours. By the mid-nineties this had shifted; students continued to pursue fitness as part of their University experience, but now they did so on their own schedule.

This pattern has been repeated across the University, particularly in the provision of information services. The first Vice-Chancellor used to spend an hour every morning reading the Times in the Library now named in his honour: 11 am, regular as clockwork. Students are now more likely to be seen drinking coffee and accessing online course materials in one of several information commons, twenty-four hours a day. The first of our information commons, the Auchmuty Information Common, opened in 2003.

The 2004 fire in the Shortland Union building in retrospect seems a turning point: a signal of the changes to student life and presage of more to come.

All images appear courtesy of Cultural Collections at the University of Newcastle. You can browse the entire collection here: http://www.flickr.com/photos/uon/. The collection has been patiently accumulated through the work of many dedicated volunteers.