The Sir Ninian Stephen Lecture was established in 1993 to mark the arrival of the first group of Bachelor of Laws students at the University of Newcastle. Since the delivery of the inaugural lecture by Sir Ninian Stephen, the annual lecture has been delivered by an eminent lawyer each academic year.

In 2020 local legal community came together for The Newcastle Law School’s 28th Annual Sir Ninian Stephen Lecture. We welcomed The Hon Justice Monika Schmidt to deliver the lecture titled ‘Technology and the courts – pivoting from chaos to the unknown.’

The Honourable Acting Justice Monika Schmidt graduated from the University of Sydney in 1979. She was a partner in Minter Ellison and lectured part time at the University of Sydney. Her Honour was appointed a judge of the NSW Industrial Court and Deputy President of the NSW Industrial Relations Commission in 1993 and also later as a Deputy President of the Australian Industrial Relations Commission. From 2009 to 2019 her Honour was a judge of the Supreme Court of New South Wales, sitting in the Common Law Division, on the Court of Criminal Appeal and on occasions as an acting judge of the Court of Appeal. She is currently an acting justice of the Supreme Court. Her Honour has held positions on many committees including the NSW Judicial Commission’s Standing Advisory Committee on Judicial Education and as Chair of the steering committee for the National Judicial Orientation Program In 2019 her Honour was appointed a life member of the National Judicial College and awarded an AM.

In late April the Newcastle Law School hosted the 24th Annual Sir Ninian Stephen Lecture. This year, members of the local legal community joined students and staff for a lecture given by Justice Virginia Bell of the High Court of Australia.

The lecture was well attended with over 250 people in the audience to hear Justice Bell’s talk titled “Equality, Proportionality and Dignity: The Guiding Principles for a Just Legal System”.

Justice Bell delivered an enlightened lecture on the history of equality and proportionality from a legal perspective. Her narrative included relevant cases from Sir Ninian Stephen’s distinguished career as well as current legal cases.

Justice Bell answered questions from the engaged audience following her lecture on a range of topics including the representation of women judges, the future of international law and human rights and ways which the legal profession can improve disadvantaged communities.

The Newcastle Law School celebrated the event with a dinner for Justice Bell and other distinguished members of the local legal community. Acting Dean, Associate Professor John Anderson, formally thanked Justice Bell for her insight and time. 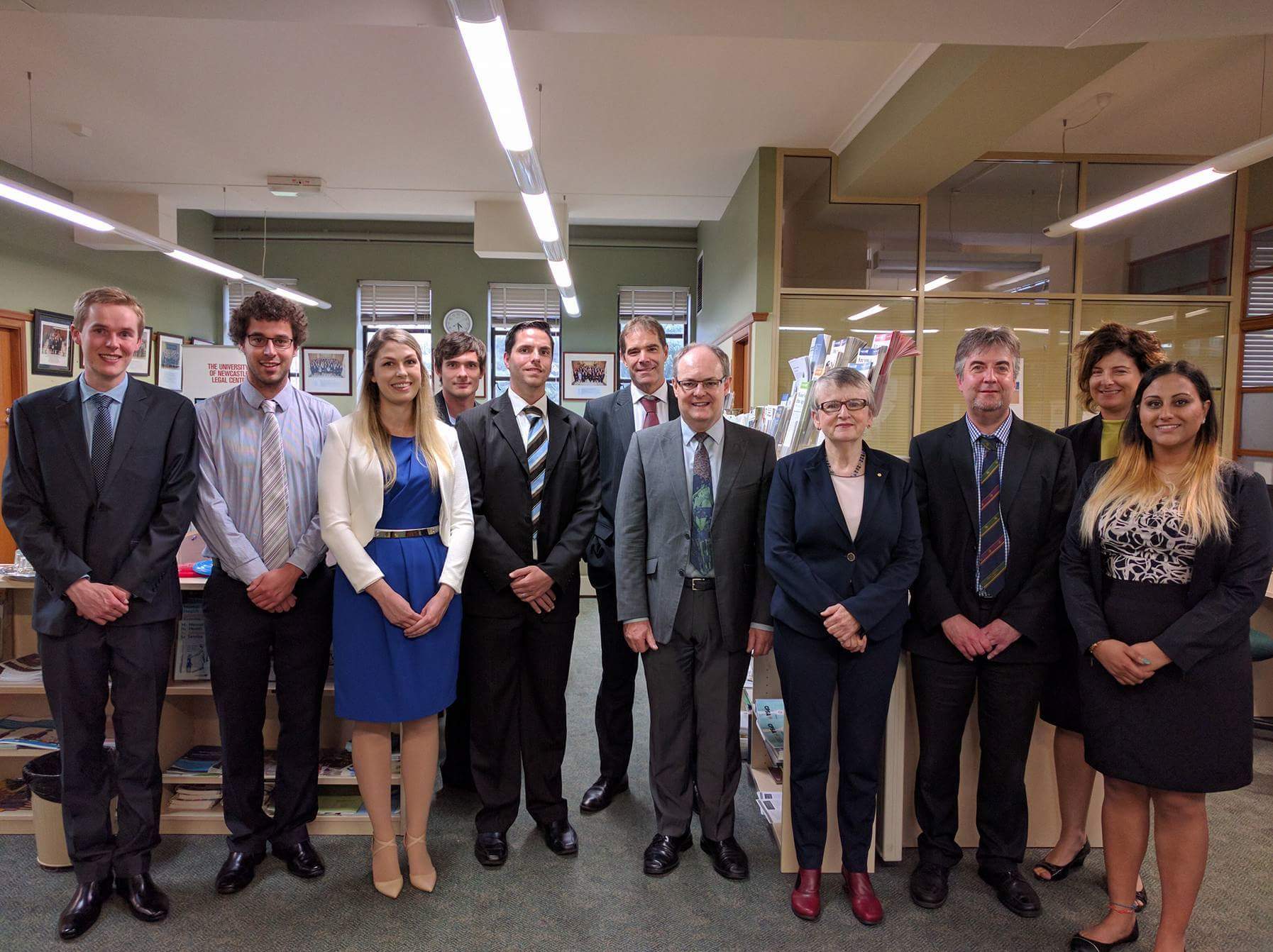 Professor Rees was appointed foundation Dean of the Faculty of Law at the University of Newcastle in 1991. Neil Rees has also been a legal academic, a tribunal member, a legal practitioner and a legal adviser to government in a career which spans over 30 years.

Professor Neil Rees conceived of the idea of the annual Sir Ninian Stephen lecture series and was proud to accept the honour of delivering it in 2015. His speech titled "I look ahead", refers to the UON emblem.

His speech covered expected reforms in sources of the law, changes in the delivery of legal services and the future of legal education. He predicted a reform in the content and complexity of legislation and the simplification of future legislative drafting. Professor Rees hypothesized that the legal profession will undergo fragmentation in the future, with paralegals taking on more specialised work and their education being highly specialised as well.

As part of the bigger picture of legal education Professor Rees highlighted the emergence of privatised law schools and online learning capabilities. In his highly directed speech, law students were catapulted into the 21st century where lawyering is fast paced, client focused and technology driven. A glimpse of what lies ahead for them, and a motivation to study hard for their upcoming exams and pursue their dreams in an ever-changing, transnational world.

The Sir Ninian Stephen Lecture was established in 1993 to mark the arrival of the first group of Bachelor of Laws students at the University of Newcastle. It is delivered by an eminent lawyer each academic year.

You can download a copy of Chief Justice French's speech here.

Robert French was appointed Chief Justice of the High Court of Australia in September 2008. Prior to this he was a member of the Federal Court where he served as the first President of the Native Title Tribunal. While serving as a Federal Judge, Justice French also served as the Chancellor of Edith Cowan University from 1991 to 1997.

Justice French has published a significant body of work in journals and books. In his numerous public addresses he has sought to bridge the gap between the study and practice of the law.