Failure of Soil and Rock Masses from Small to Large Scale

Designing structures that interact with (or rest on) soils and rocks requires a comprehensive understanding of the possible failure mechanisms. Soils and rocks are inherently different, and while it is possible to reduce the likelihood of failure of a loaded soil mass, this is more difficult to achieve for rock masses whose behaviour is controlled by discontinuities.

Fragmentation of rocks during rockfall is a very complex phenomenon to understand and predict, as it depends on the mechanical and geometrical properties of both the falling rock and the impacted slope, as well as the block trajectory before impact. Knowledge and data on rock fragmentation during rockfall is scarce, despite its crucial importance in the design of protective structures. Not accurately accounting for fragmentation can lead to overdesigned structures (in terms of nominal energy), risk of mesh perforation (as per the bullet effect) or structures that cannot adequately intercept dangerous fragments because that are inadequately located or not high enough.

PRCGSE researchers Buzzi, Fityus, Giacomini and Thoeni are investigating the mechanics of rockfall fragmentation with sophisticated 3D trajectory reconstruction (Fig. 1) and advanced instrumentation. This underpins the development of rockfall trajectory models that can predict occurrence and outcome of fragmentation. 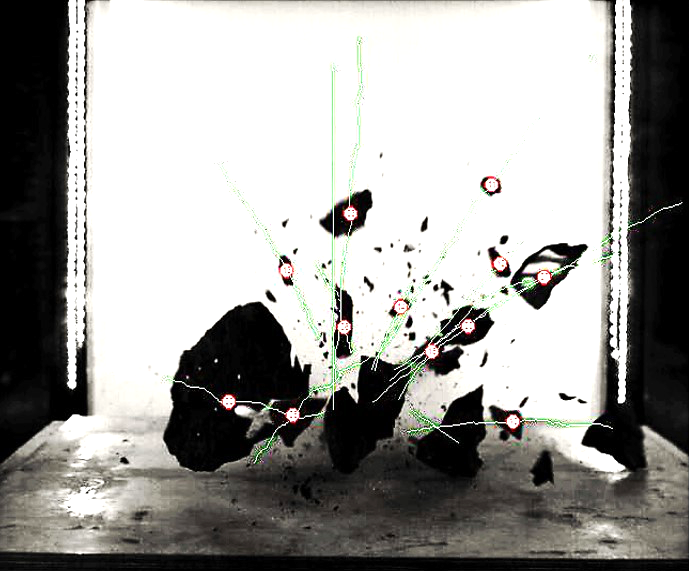 This research is currently ongoing and will have an impact on the current practice of rockfall modelling.

The occurrence of rockfall in fractured rock masses is hard to prevent, so it becomes critical to adequately design protective structures. The past decade has seen the emergence of drapery systems as an alternative to rockfall barriers. Figure 2: DEM modelling of trajectories of blocks falling under a drapery mesh installed on a high wall to protect a portal from rockfall impact

Recent large scale in situ tests and DEM modelling by PRCGSE researchers Thoeni, Giacomini, and Carter (see Fig. 2) has led to a better understanding of the dynamic performance of drapery systems and a quantification of the residual risk posed by falling blocks that allowed the mining industry to better design entry portals. PRCGSE researchers have also contributed to advancing knowledge on low energy rockfall barriers and the use of muckpiles or damping modules as energy dissipation solutions. Cutting-edge research on drapery systems and attenuators is continuing, in collaboration with rockfall engineering company Geobrugg A.G., with the objective to optimise the design of such systems. This outcomes of this research are directly applicable to the design of road and rail cuttings, and work is now underway on this.