In geotechnical engineering, stability analysis is used to predict the maximum load that can be supported by a geostructure without inducing failure.  This ultimate load, which is also known as the limit or collapse load, can be used to determine the allowable design load by dividing it by a predetermined factor of safety.  The precise value of this factor depends on the type of problem with, for example, lower values being appropriate for slopes and higher values being adopted for foundations. Rather than imposing a factor of safety on the ultimate load to obtain the allowable design load, it is also possible to apply a factor of safety to the strength parameters prior to performing the stability analysis. In some procedures, for example finite element strength reduction analysis, the actual safety factor on the strength can be found for a given set of applied loads and material parameters (which typically comprise the cohesion and friction angle).

A highly effective method for the solution of stability problems in geomechanics is known as finite element limit analysis (FELA), which has been pioneered at the Newcastle Geotechnical Research Group (Sloan 2013). Based on finite elements, the limit theorems of classical plasticity theory and large scale optimisation, FELA permits the exact failure load to be bracketed from above and below, thus providing an in-built error indicator. The lower bound formulation of FELA computes a statically admissible stress field which satisfies equilibrium, the yield criterion, and the stress boundary conditions. Its upper bound counterpart, on the other hand, determines a kinematically admissible velocity field which satisfies the plastic flow rule and velocity boundary conditions. Both the lower bound and upper bound formulations lead to large-scale nonlinear optimisation problems which are solved very efficiently using bespoke interior-point algorithms.

The latest version of the FELA software can handle problems with inhomogeneous soil profiles, anisotropic strength characteristics, complex loading and boundary conditions, soil-structure interaction and three-dimensional geometries. Moreover, it incorporates robust mesh adaptivity schemes, the effects of steady-state pore water pressures, and a strength reduction process for computing the safety factor in terms of strength. Indeed. this advanced software has already been used to obtain new stability solutions for a wide range of practical problems including soil anchors, slopes, foundations under combined loading, excavations, tunnels, mine workings, and sinkholes. 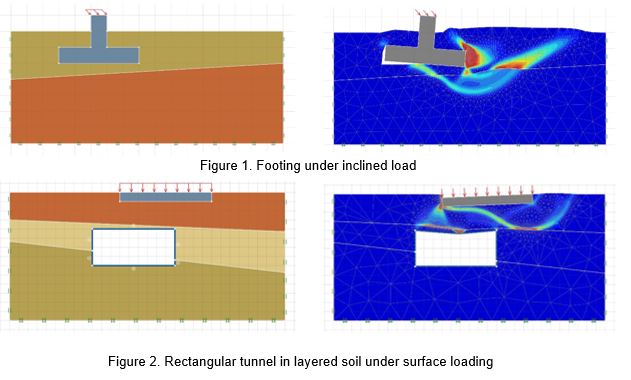