Scaling Up Production of Organic Photovoltaics 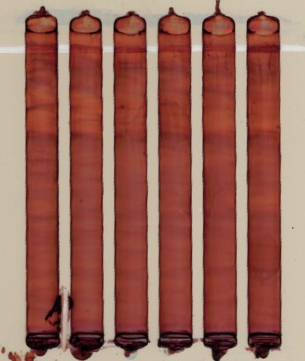 Organic photovoltaics (OPV) are a new type of solar cell made from plastics and polymers rather than glass like the panels you see on rooftops today. We're interested in manufacturing these plastic cells using fast printing and coating techniques, much like the methods used to print newspapers and magazines. The cell consists of a very thin active layer, which is the layer that generates energy, andtwo electrical contacts on either side. Using printing, we are able to accurately deposit onto our plastic substrate a liquid film around one to two microns thick, which dries to give an active layer only a few tens of nanometres thick. The picture shows the coated active layer of a solar cell before the top contact was deposited. After the top contact is in place we have produced a flexible plastic cell which is just under 1 % efficiency. Our goal is to improve the efficiencies and investigate new printing methods for fabricating the devices.

As OPV is a new technology, the materials are still expensive and fabrication only occurs in laboratories on a small scale, so it's important to know how much OPV will cost when produced on a large scale. To find this out, we built a cost model that calculates the projected future cost of the component materials and fabrication methods to give an estimation of the total cost of electricity produced by OPV. The model also shows areas where improvements can be made and costs reduced so we are using the model to guide us in working towards mass-manufacturing OPV. Realising large-scale production would mean that OPVs could be an inexpensive portable power supply and contribute towards achieving equitable access to electricity worldwide.