When Susan Grace-MacDonald was a young girl in the early 1950s, her father was sent to Stradbroke Island in Queensland for work. A scientist with the CSIRO, he was tasked with researching the neurotoxins from Cone Shells after people out on the reef who had handled the attractive shells were seriously poisoned.

“Our family went with him and I was home-schooled at that time. I saw so much life on the island. I was only about five or six but I’d be allowed to help my father with work – looking at the shells and doing things like joining the local fishermen catching mud crabs,” Susan explained.

Susan cites her exposure to the natural world at such a young age as a catalyst for her passion for science and living things. It was this passion which led her to pursue a career as a science teacher in Newcastle for 35 years at Lambton High and then at the Hunter School of the Performing Arts, before retiring in 2008.

“After retiring, I had some time on my hands and wanted to continue my educational journey as a mature-age student,” Susan said.

“When I’d teach my science classes, the kids would love it when I’d draw concepts to help explain. We were all creative learners and would do things like sing the Periodic Table.

“So I followed that creativity and studied drawing skills at TAFE before a friend told me about the Bachelor of Natural History Illustration at the University of Newcastle. She was so excited about it she said ‘you need to check it out’ – so I did, and I haven’t looked back.

“The teaching has been the best I’ve ever received. I’ve learnt the most incredible skills and techniques from people who are leaders in the field, like Dr Trevor Weekes, Dr Andrew Howells and Dr Bernadette Drabsch. My classmates have also been open and collaborative throughout – we’re a very tight-knit group and still meet up regularly.”

Susan will be joined by her son, daughter-in-law and grandson Digby – age 7 – on Wednesday, 17 April when she graduates from the Bachelor of Natural History Illustration, already with her next venture in mind.

“As part of the Natural History Illustration degree, we were given total creative freedom in an elective, external project for the degree. I was spending a lot of time with my grandson – taking him to preschool – and they told me they wanted a creative way to help teach the kids good manners.

“So I took it upon myself to develop a children’s book with matching sock puppets about ‘Wolly Birds’, which look similar to a Tawny Frogmouth. I wanted the book to be universal, so I chose not to focus on gender or race – it just had the underlying message that it doesn’t hurt to say please or thank you and that it’s great to share.

“The kids loved it so much. The book and the puppets still live there now for them to use.”

Since creating her first children’s book, Susan felt she’d found a path she’d like to continue exploring, and is now enrolled in a Bachelor of Arts to undertake study in Visual Narrative.

“I really loved what I was able to create and so wanted to learn more about using sequential imagery to create a narrative.

“My husband and I went to Antarctica in January and were both so taken with observing the penguins. There are leopard seals and orcas cruising offshore just waiting to prey on them, as well as Skua gulls circling trying to grab the eggs and chicks. They’re so up against it!

“For my next children’s story, I’ve decided to create a character with positive messaging around living with a disability.

“Genya is a Gentoo penguin who’s been in an accident and is living without a flipper. Because of her lack of flipper, she’s only able to swim around and around in circles, but I’ve turned it into an asset as she’s able to round up fish for her friends and family.”

Reflecting on her journey, Susan said it was never too late to follow a new path.

“You can start a new skill wherever you are in life and you never know where it’ll take you,” she said.

“I’m incredibly grateful to my teachers and am inspired and gratified by studying for this degree.”

Susan Grace MacDonald will graduate at the 6pm Faculty of Education & Arts ceremony on Wednesday 17 April. 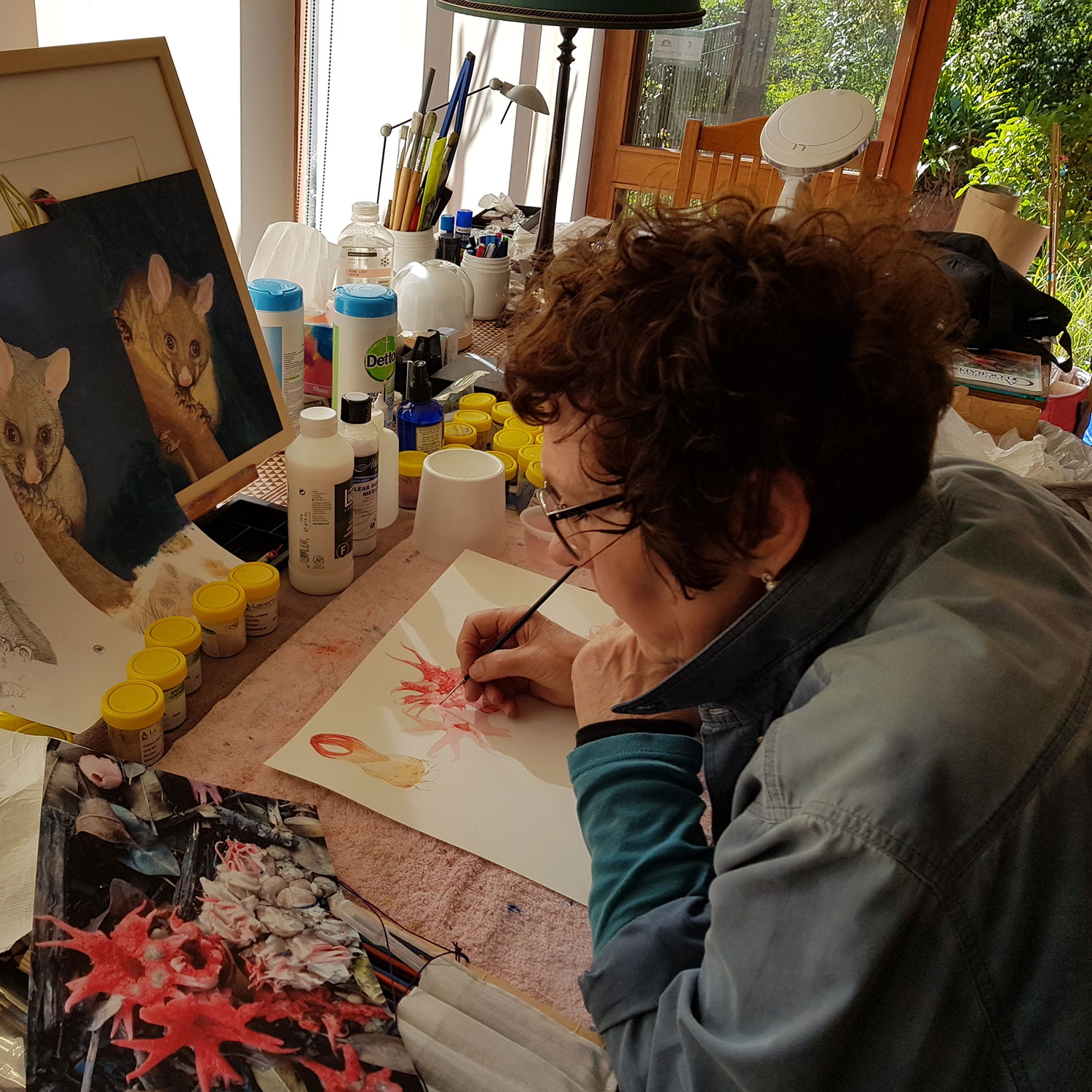 Susan's exposure to the natural world at a young age was a catalyst for her passion for science and living things.

You can start a new skill wherever you are in life and you never know where it’ll take you.