Dr Karen Blackmore is driven by problem-solving. From the application of Virtual Reality for industry, to girls participation in STEM Karen is always looking toward an innovative solution to society’s issues. 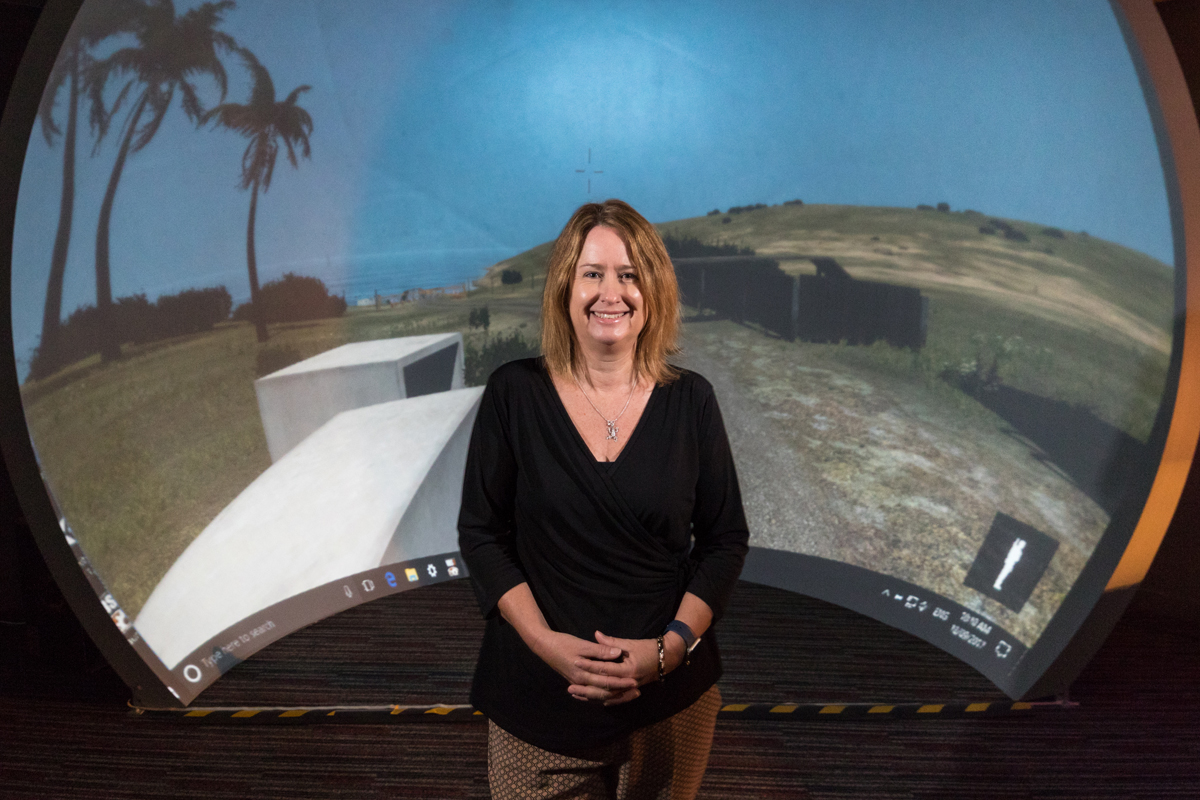 An early career as a special scientist has led Karen to some diverse and challenging fields, and Karen’s now moved from making maps to assisting industry navigate the maze of virtual reality to deal with the challenges of training for real-world problems.

Gaming’s transitioned from being purely for fun, to taking a more serious stance, so it’s unsurprising that Karen’s moved into this space from a teaching and a research perspective. “As a spatial analyist I make 3D environments for a living, so the transition into this space was a fairly natural one. I teach game design and production and while students are very interested in those spaces, the job prospects are limited, so I feel the need to provide guidance in spaces where there’s a range of job prospects,” Karen says.

Serious gaming is an area of opportunity with a range of businesses taking it on as a form of training. “Serious games falls into my simulation and training area and I’m particularly interested in that space because they use a lot of common technologies where job opportunities are interesting and offer huge scope for growth.”

One of the key areas utilising simulation and virtual reality for training is defence, and Karen’s forged key partnerships in the area. “I was contacted by the Director of the Defence Simulation Centre to do training for staff which has spawned a key collaboration at Williamtown where they do all the training for our UN Peacekeeping forces both locally and globally,” Karen says.

“People are flying in from all over the world to receive training in the Hunter before being deployed,” Karen adds. “They’re faced with a lot of problems moving into those landscapes so defence is using simulation-based training as one of their tools in preparing their people.”

UON has now signed an MOU where Honours students in the IT program can collaborate with students from the Defence College on projects. “This is a real growth area,” says Karen. “We’ve already had successful students go through and complete projects and now more local industry groups have approached us to collaborate with students and research projects. There’s a definite skill shortage in the defence-space in particular where the workforce is limited as they are not permitted to bring in people from overseas for national security reasons.”

Karen’s interest in virtual reality goes back her special analysis days, where the idea of using 3D models and virtual reality to view them first began. “The technology has now advanced so far, and it’s now readily available and has matured enough to be deployable in a range of different scenarios,” Karen says. “The biggest changes that industry partners face is answering the question ‘How can we best make use of this technology?’”

Karen and her team are looking to help industry develop training scenarios that will allow a trainee to participate and then develop a set of skills that are transferable to real-world scenarios. Using a broach range or VR devices such as the head-mounted Oculus Rift and the HTC Vive, to the newly acquired iDome – which is a large format immersive display, the team are exploring which form of technology is best deployed in which situation.

The focus of i3 Lab is industry-linked research: finding new solutions to complex problems caused by interactions between humans, computers and data. “Recognising the need for academics to engage better with industry we sat down and thought about the best ways to successfully collaborate and connect with industry,” Karen says. “It’s our ability to deliver services that’s of interest to industry – not an academic publication record, so we needed to set up a commercial front when representing the university when dealing with industry.”

The i3 Lab has successfully been appointed to a Simulation Support Panel by a Government tender, so it’s now on the Preferred Supplier List for any Government Department. “This was a major coup,” Karen says. “We now provide services around evaluating simulation environments.”

While many people recoil at the very thought of a problem Karen takes a completely different approach to the issue: “What drives my interest in STEM? Problem-based issues. What drives my research? Interesting problems. What do I prioritise in my work? Problems. And not having a full solution set to a problem because of limited participation by women is a problem.”

Karen’s experience with gender stereotyping was highlighted during her career as a spatial scientist in the public sector. “I made maps for a living in a very male-dominated field, and if we feed in all the stereotypes of women: that they’re not meant to be good at reading maps, and we’re not meant to have strong spatial abilities, well, you can imagine the issues I faced…” Karen says with a wry smile.

Despite the challenges, Karen’s still inspired by her early career: “I love the art as much as I love the science,” Karen says. “For me, that area in particular is about creative expression. There’s a lot of aesthetics and visualisation involved: understanding how we can best organise things so that people can understand. I see that the field itself would be enhanced with the addition of women: women bring a different perspective and a different set of skills to the field,” Karen says.

In the early years of her academic career Karen was often the only woman in her particular discipline, “I come from the particular viewpoint that the driver is that people should work to our abilities, and what we understand to be our abilities should not be undermined by stereotypes.”

There’s a sustained global push to encourage more girls into STEM, with the gender balance seen as driving inequity. However, Karen approaches it in a different manner. “The maleness of this area isn’t the driver for me, it’s the obvious contribution that a female can add to those areas that drives me,” Karen says. “It’s about generating better solutions, and we should be striving toward this.”

Karen’s commitment to increasing the participation of girls in STEM-related subjects saw her bring Tech Girls Are Superheros to the Hunter. With this program, designed to bring 100 000 girls to the tech industry by 2020, Karen brings a group of Year 8 girls from Maitland High onto UON’s campus to delve into the world of technology. “As someone who’s been lecturing in IT-related courses for over 10 years, often to entirely male-dominated classes, there’s a very different dynamic when it’s a girls-only class.”

“When I have 20 girls in a lab developing a mobile app it’s fascinating to see how they work together. As most of them don’t have a technology background the day’s as much about entrepreneurship as it is about coding,” Karen says.

This program inspired her ‘a-ha’ moment: “When you only have a few girls in class they get sucked into the first-finished mentality and they’re seen as slowing things down if they don’t. However, projects need balance: you need directedness and a capacity to meet your targets, but intermixed in there you also need an exploration of space.”

“The sense of ‘playfulness’ they have with the software is unique. They’re interested in exploring, testing and surveying the space rather than being driven to complete the project in the shortest time possible as so many boys are.”

Karen’s latest project is co-founding HunterWiSE – where she has the opportunity to work with industry, partners, schools and communities alongside women in STEM to enhance opportunities and promote positive collaboration.

HunterWiSE features two interlinked actions aimed at increasing the number of girls and women participating in STEM through a school program and a series of networking events across the Hunter for women STEM professionals.

This approach is designed to steer women toward STEM, and encourage their retention in the STEM pipeline.

Dr Karen Blackmore is driven by problem-solving, from the application of Virtual Reality for industry to girls participation in STEM

Dr Karen Blackmore is an Associate Professor in Computing at the School of Electrical Engineering and Computing, The University of Newcastle, Australia. She received her BIT (Spatial Science) With Distinction and PhD (2008) from Charles Sturt University, Australia. Dr Blackmore is a spatial scientist with research expertise in the modelling and simulation of complex social and environmental systems. Her research interests cover the use of agent-based models for simulation of socio-spatial interactions, and the use of simulation and games for serious purposes.  Her research is cross-disciplinary and empirical in nature, and extends to exploration of the ways that humans engage and interact with models and simulations. Before joining the University of Newcastle, Dr Blackmore was a Research Fellow in the Department of Environment and Geography at Macquarie University, Australia and a Lecturer in the School of Information Technology, Computing and Mathematics at Charles Sturt University.

Assessing coal properties and their effects on coking performance: a data mining approach$330,000

To assist HCCREMS identify the long-term threats of climate change on a number of regionally key species, regional scale climate change projections were required to be incorporated into species distribution models (SDM). The potential impacts of climate change on the Hunter, Central and Lower North Coast region have been previously modelled (Verdon, 2007; Blackmore & Goodwin, 2008 & 2009). This project aimed to update regional historic data and plots, validate the existing models to determine their suitability to incorporate into the SDMs.

Training is a critical component for successful organisations and industries. Using technologies such as games technologies, and virtual and augmented realities can improve training outcomes when implemented appropriately. This project focusses on ongoing initiatives with Defence and defence industry to improve training processes and outcomes. A national report, authored by researchers from the University of Newcastle, to guide Artificial Intelligence (AI) and Emerging Technologies in Schools has been launched.

Girls from two Hunter-based High Schools seeking a higher education and career in STEM-related disciplines are closer to achieving their goals thanks to a partnership announced between HunterWiSE, Newcastle High School, Callaghan College and Newcastle Coal Infrastructure Group. The University and ADC have a Memorandum of Understanding (MOU) to collaborate on research into the use of virtual simulation to support individual training. The HunterWiSE 2017 Pilot Program culminated in a final presentation on Wednesday the 1st of November.

UON is part of the Athena SWAN charter and is offering a full-scholarship to advance gender equity.

A national report, authored by researchers from the University of Newcastle, to guide Artificial Intelligence (AI) and Emerging Technologies in Schools has been launched.

Girls from two Hunter-based High Schools seeking a higher education and career in STEM-related disciplines are closer to achieving their goals thanks to a partnership announced between HunterWiSE, Newcastle High School, Callaghan College and Newcastle Coal Infrastructure Group.

The University and ADC have a Memorandum of Understanding (MOU) to collaborate on research into the use of virtual simulation to support individual training.

The HunterWiSE 2017 Pilot Program culminated in a final presentation on Wednesday the 1st of November.

UON is part of the Athena SWAN charter and is offering a full-scholarship to advance gender equity.