A new frontier in space law and justice technology

Dr Bin Li’s work lies at the intersection of technology, law and justice. His research assesses the legal regulation of space technologies and explores the benefits and risks that new technologies pose for justice reform. 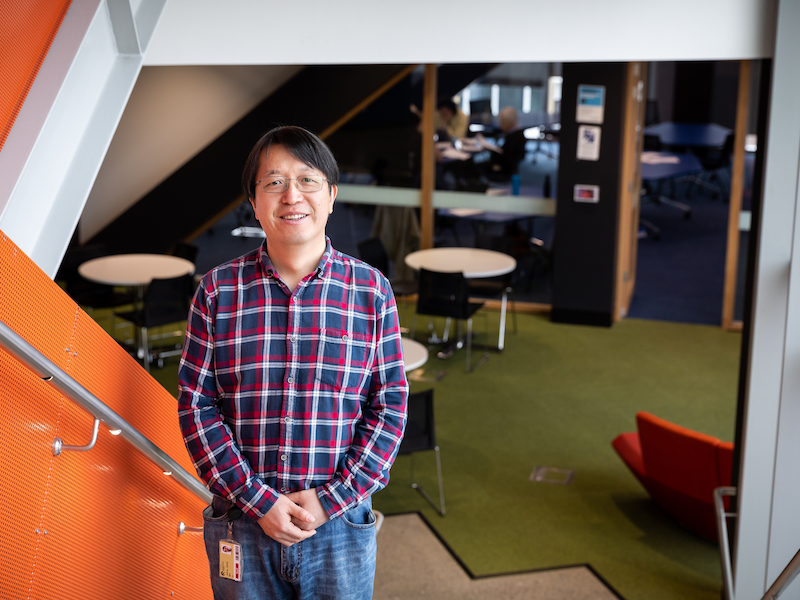 What role does technology have in the justice sector? How should space technologies be regulated by national and international governments? As we enter a new decade of technological innovation, Newcastle Law School lecturer Dr Bin Li is helping to determine the best ways to use and regulate some of our world’s most innovative creations.

“Technology has been rolled out rapidly in the justice sector in Australia and other parts of the world, and it is important to ensure that the use of technology contributes to fair and just resolution of disputes instead of causing new burden or adverse impact on disputing parties,” explains Bin.

“My research looks into how national governments should harness the use of space technology — in military activities in outer space for example — so that the application of the technology can contribute to a safe and secure outer space environment for humankind.”

Bin has now been researching space technology regulations for more than 13 years. He has emerged as a prominent and authoritative voice within the research community and general public, having written several popular articles for publications such as The Conversation.

“My research work and articles are helping to inform the general public about important issues arising from human use of outer space and space technology.

“It’s exciting to see the increasing hits on my publications at different online platforms, including SSRN, ResearchGate and The Conversation.”

One of Bin’s recent articles for The Conversation,evaluating India’s anti-satellite test, garnered more than 25,000 hits from all corners of the globe.

“I’m proud that my research is having a high impact on the public perception of outer space—the new frontier for humankind.

“These metrics means that people are spending their time reading my research, and that it has value to them. This also means potential collaboration opportunities with researchers at home and abroad.”

After moving to Australia in 2016, Bin began to extend his research on technology into a new domain: the justice system. His work in this area seeks to shed greater light on how new technologies, such as artificial intelligence and blockchain, are used within the justice sector and how they impact on dispute resolution processes.

“We know there are some concerns around the use of these technologies in the justice sector.

“My research investigates how technological innovations are used in court processes and other dispute resolution approaches, such as mediation and arbitration, and how they affect stakeholders’ rights and obligations.

“Ultimately, we are looking at whether the use of these new technologies really contributes positively to fairness and justice.”

Within this research domain, Bin has been collaborating with colleagues at the University of Newcastle, including Professor Tania Sourdin, on a research project evaluating ‘Adieu’, an online divorce tool developed byAdieu AI Pty Ltd.

“We are collecting and analysing feedback of the platform’s end-users to see what concerns stakeholders have with the online technology and what could be done to address these challenges.”

Bin’s research network extends to Canada, China, the USA and elsewhere. He is a visiting scholar for universities such as DePaul University College of Law, USA, where he has conducted research into air and space law.

Bin’s educational background and work experience in highly respected Chinese universities also puts him in an excellent position to engage and collaborate with top Chinese researchers specialised in areas of law and technology and space law.

While Bin shares that the move from China to Australia in 2016 was initially challenging, he continues to be inspired and motivated by his peers at the University of Newcastle and further afield.

“The transition from the work environment in China to Australian academia was a bit hard at first, but thanks to the generous support from colleagues at the Newcastle Law School and the Faculty of Business and Law, I am used to this new and exciting work setting and really enjoy it!”

A new frontier in space law and justice technology

Dr Bin Li’s work lies at the intersection of technology, law and justice. His research assesses the legal regulation of space technologies and explores the benefits and risks that new technologies pose for justice reform.

Bin joined Newcastle Law School as a Lecturer in January 2016. He previously worked as an Associate Professor at Beijing University of Aeronautics and Astronautics School of Law (Beihang University School of Law) in Beijing, China for eight years.

Bin's doctoral thesis focused on the basic principles of international law, including state sovereignty, state responsibility, the protection of human rights and the use of force in international relations.

Bin has developed a particular interest in the legal issues of international aviation and space law since he started his academic career at Beihang Law School in 2007. He has published a number of high quality journal articles in this regard in Chinese and English languages and has chaired a number of research projects funded by Chinese government. His research topics covered environmental protection in outer space and intellectual property issues in international space station. In view of his expertise in aviation and space law, Bin was invited by Chinese government to be an expert in drafting Chinese relevant legislation, including Civil Airplane Industry Development Regulations(Draft) and Interim Measures on Space Debris Mitigation and Protection(2010) . In 2013, he was awarded China Institute of Space Law Excellence in Research Award.

Bin was the visiting scholar at DePaul University International Aviation Law Institute (U.S) in 2009 and at Newcastle Law School (Australia) in 2012. He was invited by Australian Government Department of Foreign Affairs and Trade to give a lecture on space and national security issues in Canberra in October 2012 to legal officers from that Department, representatives from Royal Australian Air Force, representatives from the U.S Embassy as well as legal scholars from Australia. He served as a core expert in McGill-funded research project of 'Manual on International Law Applicable to Military Uses of Outer Space (MILAMOS) ' in 2016 - 2017.

After moving to Australia in 2016, Bin began to extend his research on technology into a new domain: the justice system. His work in this area seeks to shed greater light on how new technologies, such as artificial intelligence, are used within the justice sector and how they impact on dispute resolution processes.

Bin is the Program Convener for the LLB (Hons) and also provides support to international students from China who study law at Newcastle, including facilitating support for them from more senior Chinese students. Bin is an elected member of the UON Academic Senate for a two-year term of office from 1 January 2021.

Legal Governance on the Flight Management of the Unmanned Aerial Vehicles in the U.S.A$6,212

The project investigates and comments on the veracity of the Adieu product and the role it could play in the current family dispute resolution environment and justice sector.

Funding body: Faculty of Business and Law University of Newcastle

To present at ANZSIL annual conference in Canberra in 2019

Funding body: Faculty of Business and law, The University of Newcastle

The funding was utilised to employ a research assistant to do editing work to an article.

Funding body: Faculty of Business and law, The University of Newcastle

This is a two week intensive clinical legal education placement hosted at Beihang University in Beijing, Peking University in Beijing, Shanghai Jiaotong University in Shanghai and East China University of Political Science and Law in Shanghai. The work integrated placement consists of students attending and participating in legal advice clinics and workshops held at universities, courts and arbitration institutes in China. Further, students attend law firm offices of international law firms based in Beijing and Shanghai and discuss with Chinese and international legal practitioners the cases and areas of law that are conducted by the law firms. The placement also involves students attending seminars and participating in clinical workshops together with Chinese law students and staff regarding the law and legal process in Australia and China. The learning activities include interactive simulated client interviews, court hearings, mediations and negotiations. The project enhances student knowledge of China and its legal system and strengthens partnerships with universities and law firms in China.

How to Teach Chinese LLB Students in English Language - Take The Course of Public International Law As an Example $2,000

Comparative Study on Aviation Industry Legislation In the U.S and EU$20,000

Fostering Law Students Capable of Litigating Before International Courts/Tribunals In A University Of Science and Technology$8,000

Legal Governance on the Flight Management of the Unmanned Aerial Vehicles in the U.S.A 2019 - 2020

The project investigates how the unmanned aerial vehicles (drones) are legally regulated in the United States and provides consultancies on the effective approach to booming the drone industry while ensuring the public safety. The project is funded by the Key Laboratory on Legal Strategy and Governance of Industry and Information Technology based in Beihang University in Beijing and please see http://fxy.buaa.edu.cn/info/1054/4788.htm for grants approval.