Professor Peter Twining’s work explores how we might redesign schooling in the light of challenges the world is experiencing. 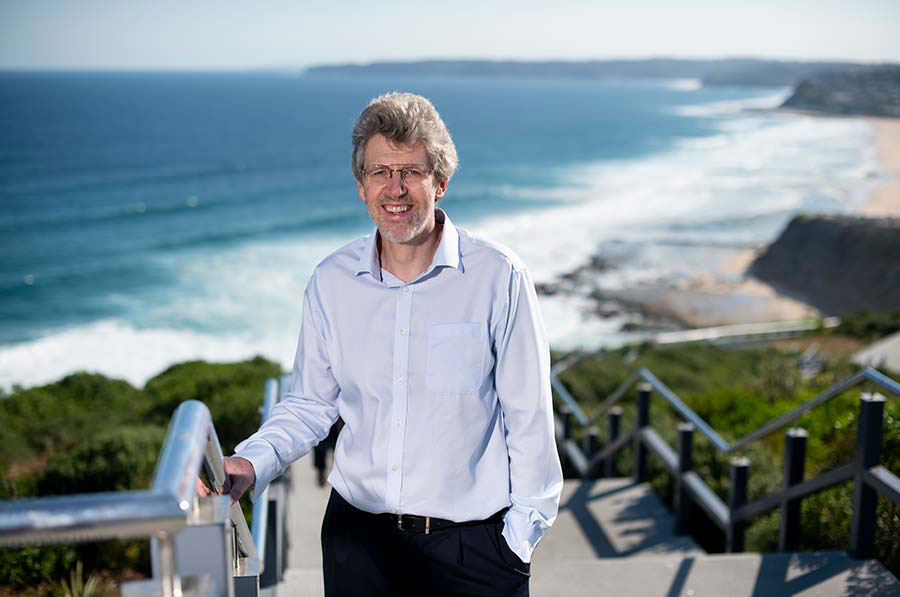 School was not a positive experience for Peter Twining, despite his privileged male/white/middle class background. He knows firsthand how the current industrial model of school is failing students and he is passionate about rethinking our education system in ways that will lead to ‘individual fulfillment and universal wellbeing’.

“I believe that all young people should leave school feeling positive about themselves and enthusiastic about learning. Sadly, that is not the case for a large number of people. Equally problematically, given the radical changes happening in the world, school no longer prepares you well for life outside school,” Twining said.

“We need to rethink what the purposes of school are in a world where automation may mean that many of us are unemployable. We need to empower people to be able to influence the future and tackle wicked problems such as climate change.”

Twining joined the University of Newcastle in 2019 having come from England where he worked on a research initiative to explore the key dimensions of a 'fit for purpose' education system for individuals and society; a project known as SCHOME (not school – not home – schome – the education system for the automation age). He also led a £9.65 million professional development programme focused on how to teach more effectively with and about digital technology. He blogs about his research at https://halfbaked.education.

Twining is focused on bringing about change in our education system, and is excited by some of the innovations Australia is introducing.

“Changing the education system is notoriously difficult. Part of why I moved from England to Australia was that the scope for change in the English system is incredibly limited – indeed the English school system has gone backwards with a renewed focus on ‘facts’ rather than ‘skills and attributes’. There are developments in Australia that seem to offer greater hope for the future – such as Big Picture programmes within mainstream schools and the recent NSW Curriculum Review Interim Report,” he said.

Children’s digital practices inside and outside school

Twining ran a project in England that looked at young people’s use of digital technology outside schools, the extent to which that influences practice inside primary schools, and what the factors were that affect those two things.

The project, known as NP3 had some interesting results.

“I was surprised by the range of expertise that some young people are developing in the use of digital technology outside school. For example, I met Latifah, a ten year old Somalian refugee, who outside school was running her own amazing YouTube channel. However, she hid this from her school because she had seen others be punished by the school for engaging in similar activities. From conceptualising the idea for the channel and it’s content, to her ability to film the videos and deal with comments (including from ‘haters’) she showed a remarkable degree of understanding, sophistication and technical prowess. In contrast, within school, whilst being recognised as a digital leader, the expectations were much lower – for example ensuring that laptops were charged and the interactive whiteboard was switched on in the morning,” Twining observed.

The project also made Twining question simplistic assumptions about the impact of socio-economic status on ‘access’ to digital technology outside schools. Whilst all of the children in this study had access to mobile devices, the data tentatively suggested that children from wealthier backgrounds often had less ‘free time’ in which to use digital technology because of their other activities (e.g. swimming lessons, drama club, dance practice). They also often seemed to have more restrictions placed on their digital technology use by their parents (in terms of limits on Internet access or close monitoring of their online activities).

The project also highlighted the scope that individual classroom teachers have to be agentive and to change how they teach (even within the same school). For example, whether or not to allow their students to decide or negotiate when they were going to use mobile devices to support their learning.

Importantly the NP3 research also reinforced existing evidence about the negative impact of assessment and accountability regimes on school practices.

Point of Learning – an alternative to traditional assessments

Twining believes that in order to change the schooling system we should focus on changing assessment and accountability.

“Quite rightly teachers do what they are held accountable against. If they’re being judged against their students’ results in the HSC and NAPLAN, then they should focus on making sure the kids do well in those tests,” he said. “But those tests don't capture evidence of many things we think are really important today, like creativity, entrepreneurialism, collaboration and teamwork. There is a huge gap between the rhetoric of ‘21st century skills’ and the reality of current high stakes assessments.”

As an alternative to traditional forms of assessment Twining helped developed Point of Learning (PoL), as both a reflective learning tool and a means of collecting evidence about performance against agreed targets.

“PoL is an alternative approach to assessment that should make it possible to collect evidence about aspects of learning which traditional forms of assessment (e.g. exams) cannot capture.”

The process of agreeing targets and identifying these practices helps to ensure that everyone involved has a shared understanding of what you would have to do to achieve the targets. It also helps to make explicit what might otherwise be tacit knowledge by getting participants to talk about what they do that relates to the targets.

The users then make claims about the targets that have been achieved, using an app on their mobile device.

“You can make a ‘self-claim’ – ‘I just demonstrated that I met that target’. A peer could make a claim for you – ‘I just saw you demonstrate that you have met that target’. Or an independent assessor can make a claim for you. Over time you build up a bank of claims made by a range of people saying they saw you achieving particular targets - it creates a really credible evidence base. It’s a different way of thinking about assessment.”

In his role at UoN the challenge that Peter is tackling is to research new ways of evidencing learning. “The HSC and the ATAR should not be the main focus of schooling, they are too narrow and constraining. We need to find ways to assess the things that matter, not just the things that it is easy to assess. If we can do that we can help to redesign schooling so that it serves all of our needs – ‘individual fulfillment and universal wellbeing’.”

Professor Peter Twining’s work explores how we might redesign schooling in the light of challenges the world is experiencing.School was not a positive experience for Peter Twining, despite his privileged male/white/middle class background. He knows firsthand how the current industrial…

I am passionate about enhancing education systems, with a particular focus on school age learners.

I am currently the Professor of Education (Innovation in Schooling & Educational Technology) at the University of Newcastle (Australia), having previously been Professor of Education (Futures) at the Open University (UK). I have been a primary school teacher, initial teacher educator, the Head of Department of Education at the Open University, the Co-Director of the Centre for Research in Education and Educational Technology, and Co-Editor in Chief of Computers & Education. I have brought in over £10million (approx. $AU18million of external funding, most of which was focussed on issues to do with the purposes of education, the management of educational change, and enhancing education systems, informed by understandings of learning, pedagogy and the potentials of digital technology. I blog at https://halfbaked.education and am @PeterT on Twitter.

Investigating the use of Point of Learning (PoL) to support staff in a day nursery to enhance their practice. See the final report. (£10,500)

A small scale pilot to explore the use of Point of Learning (PoL) to support sports science undergraduates develop 'the attributes of a scientist'. (£1,700)

NP3 explored the digital practices that children engage with outside school and the extent to which these are recognised, valued and influence practices inside primary schools. We were concerned with issues to do with social justice and the institutional factors that impact on schools’ responses to pupils’ digital practices. See http://edfutures.net/NP3 for more info. (£200,000)

This funding enabled the extension of the original English version of the survey tool through collaborations with colleagues in the USA, Australia, Italy, France, Bangladesh and China - additional versions were created that were customised for use in a range of other countries (including translating the text and adapting the terminology, etc..). The YOTS website is available at http://www.yots.org.uk. (£5,000)

This initial funding enabled the creation of the original version of the YOTS tool in English. See http://www.yots.org.uk. (£3,800)

The third phase of Vital included 22 case studies looking at digital technology strategies in school and the establishment of the EdFutures.net website as a vehicle for sharing research evidence around the effective use of digital technology in schools. (£1.25million)

The second phase of Vital extended the range of professional learning opportunities available, including the addition of the In-house Professional Development Partnership (a one year programme supporting a member of school staff to run a professional development programme within the school, linked to their school development plan). (£2.5million)

Vital was funded to enhance teaching with and about digital technology in state funded 5-19 education in England. (£5.65million).

Phase 3 of the Schome Park Programme again adjusted the model of support for learning - shifting to supporting group projects which were lead by members of the community. (£15,263)

The Schome Park Programme set out to explore dimensions of practice that one needs to think about when designing and education system. It used Teen Second Life (TM) to give hundreds of 13 to 65 year olds lived experiences of new ways of supporting learning. In Phase 1 we provided dedicated teaching areas and schedules sessions for Physics (run by the National Physical Laboratory), Philosophy (run by Warwick University) and Archaeology (run by the University of Liverpool). (£54,000)

Phase 2 of the Schome Park Programme maintained the same aims (exploring dimensions of practice that one needs to think about when designing an education system). The model of support provided was changed - with a shift in focus to individual members of the community being responsible for supporting learning - a major focus on collaboration and independent learning. (£20,000)

The Aspire Pilot worked with groups of students to support them in developing innovative visions for schooling.

Exploring the implementation of aspects of the governments ‘Harnessing Technology Strategy’. Key finding being that the main challenges were political not technical - and had been known about for the past 30 years. Download the report.  (£48,256)

Exploring the use of Tablet PCs in schools. Download related reports/papers from ResearchGate.  (£95,878)

Automated Profiling of Learners’ Understandings of Standards (A+)$35,870

Developing an alternative approach to assessment

Software Use, Reuse and Customisation in Education (SoURCE)$538,201

Exploring issues surrounding the re-use of software to support learning within higher education. (£299,001)

Developing hypermedia tools for use by students. (£4,000)

Developing self-study materials to support teachers’ use of ICT. (£12,300)

Exploring the use of laptops in teacher education. (£2,500)

Professor
School of Education
College of Human and Social Futures