Documenting small, regional languages can help them to not only survive, but thrive.

Research locations don't come much more attractive than Vanuatu. But it is not the crystal waters and palm-fringed beaches that continue to draw Dr Catriona Malau back to the archipelagic nation in the South Pacific.

Malau, a researcher with the Endangered Languages Documentation, Theory and Application Group within the Faculty of Education and Arts, is a linguist with a special interest in island languages spoken in Vanuatu. For her, the allure of the country is its linguistic diversity - with approximately 100 languages spoken by a population of about 255,000 - and the challenge presented by learning, understanding and deciphering those languages.

"It is the excitement of discovering how a language works, and being the first to document and grammatically analyse it," Malau says. "The island languages of Vanuatu are all related but there is surprising variation between each of them, which makes them quite fascinating to study."

For her PhD studies, undertaken through the Australian National University, Malau wrote and published a grammatical description of the North-east Ambae language, spoken on the island of Ambae in the north of Vanuatu. For the past 10 years she has been systematically documenting another of the country's languages, Vurës, which is spoken by about 1,500 people on the island of Vanua Lava.

Since 2006, her research has been supported by Germany's Volkswagen Foundation, which funds studies of minority languages through a philanthropic program called DoBeS (an acronym for Dokumentation Bedrohter Sprachen or Documentation of Endangered Languages).

Malau deposits her data and translations in a publicly available digital archive on the DoBeS website and is progressively writing a web-based multimedia dictionary of the language. The multidisciplinary research project has also involved a marine biologist, botanist, anthropologist and ethnomusicologist, who have contributed their expertise to identifying and describing aspects of the island environment and culture. A German researcher works in partnership with Malau, documenting Vera'a, another language spoken by a smaller collective of people on the same island.

To learn and understand a language in its cultural context, linguists must immerse themselves in the communities they study.

"Most of the data from field trips comes from recordings of people telling traditional stories or speaking in different situations," Malau says. "To hear the language as they use it you need to be an active observer by participating in village activities, going to their ceremonies, working alongside them and generally living as they do."

Malau met her husband on Vanua Lava, so her field trips these days have a personal as well as academic purpose, but she says the people on the island have always welcomed her and supported her work.

"While English and French are the languages of education in Vanuatu, the Indigenous languages are a vital part of their cultural identity and research of this nature gives credibility to the language and lifts its status," she says.

"Linguists can make a real contribution to communities by encouraging maintenance of their language and helping to ensure its longevity." 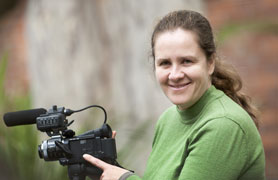 Documenting small, regional languages can help them to not only survive, but thrive.

Documentation of Ifira-Mele and Emae, two Polynesian languages of Vanuatu$68,901

Documenting biocultural diversity in the languages of Vures and Vera'a$40,000

A grammatical description of the Vures language, Vanua Lava, Vanuatu$3,750