It started at night a month before Christmas. A terrified Imogen Picker noticed her sleeping toddler son was having difficulty breathing. “Leo would stop breathing for between 10 and 20 seconds. He’s always been a snorer, but this was frightening,” says the mother of three.

On 22 November 2021, Leo was admitted to Port Macquarie Base Hospital, 60 kilometres from the family’s Yarravel home just outside Kempsey. He stayed overnight but didn’t improve and was readmitted three days later. Staff informed Imogen that Leo’s airway was being obstructed by his swollen tonsils and adenoids and he required surgery, but there was a significant glitch: Kempsey does not have an ear, nose and throat (ENT) specialist. 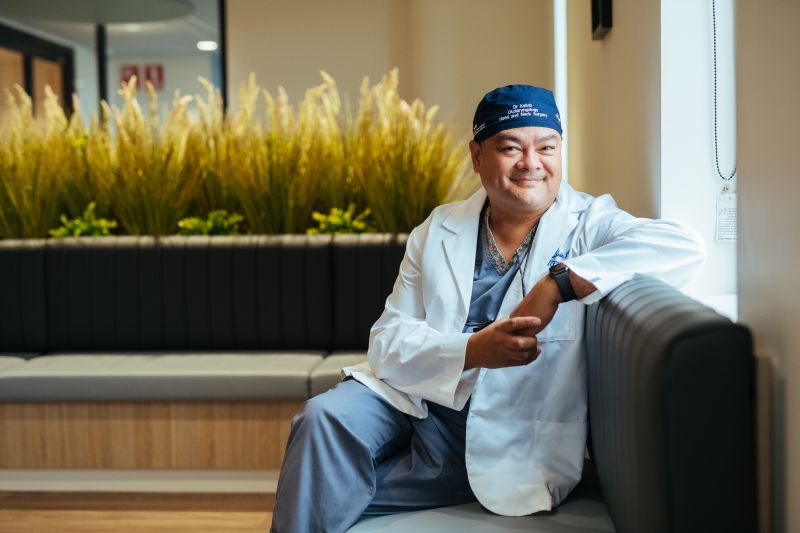 When Imogen rang the closest specialist in Coffs Harbour, she was told there would be an 18-month wait for an appointment. “A child shouldn’t have to wait that long for treatment,” says Imogen.

Kempsey District Hospital’s consultant paediatrician Dr David McDonald offered the desperate family a way forward. He picked up the phone and called Newcastle ENT specialist and University of Newcastle Associate Professor Dr Kelvin Kong. As one of only three Indigenous surgeons in Australia, the proud Worimi man has been spearheading the use of telehealth to treat patients in regional and remote communities, an extension of his research into middle ear disease among Indigenous children. “Delayed treatment can create all kinds of issues and affect every aspect of a person’s life,” Kelvin says. “For kids, especially when it comes to ear health, they struggle to learn.”

“Delayed treatment can create all kinds of issues and affect every aspect of a person’s life,” Kelvin says. “For kids, especially when it comes to ear health, they struggle to learn.”

David McDonald sent Kelvin a video Imogen had recorded of Leo’s laboured, unpredictable breathing as well as photos of his enlarged tonsils and adenoids. On 27 November, Leo was flown by AirMed to John Hunter Hospital and Kelvin operated two days later. “His breathing returned to normal almost straight away,” says Imogen, who travelled to Newcastle with Leo for the surgery and two-week post-op stay. “We’re really lucky that Dr McDonald and Dr Kong worked together. I’m not sure how much longer we could’ve coped.”

It is a view shared by Kempsey carer Karen Kelly whose nine-year-old foster daughter Chazaya has congenital ear issues. Kelvin has treated Chazaya for five years – both remotely and in person. “For us to travel to Newcastle for appointments, it’s six hours in the car and Chazaya misses school,” says Karen. “With regular teleconferences, I can speak to Dr Kong and give him updates.” 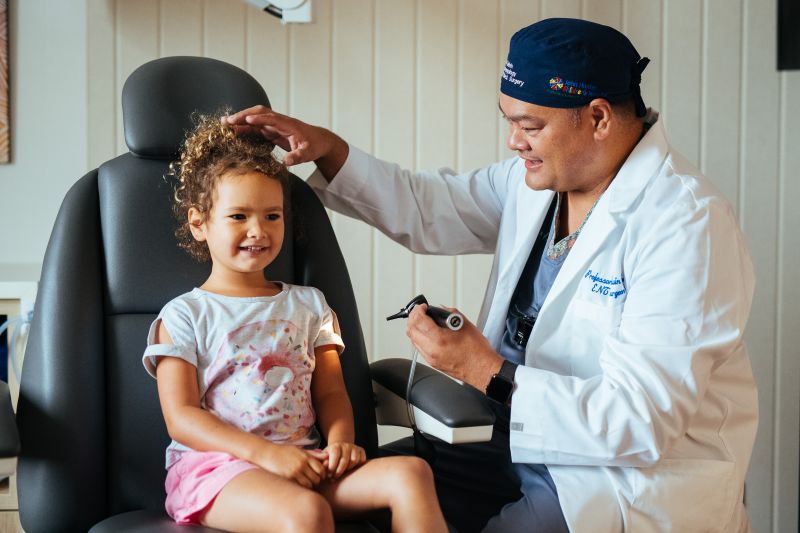 On 4 December, Chazaya had surgery in Newcastle. “Chazaya can get stressed, but Dr Kong walked in and as soon as he said, ‘Hello beautiful’, she relaxed. Because she’s Aboriginal, she connects with him on that level as well. He just knows how to calm her.”

Kelvin’s commitment to telehealth, which pre-dates the arrival of COVID-19, stems from his focus on empowering communities and removing barriers that prevent access to services. “The government’s perspective is a doctor doing a consultation in front of a computer screen, but that’s not my idea of telehealth.” Instead, Kelvin is trialling a process where Indigenous health workers take down a patient’s history and supplement this with photos to share with a city-based specialist. “The health workers are on the ground and you’re helping to build capacity and leadership in the community. I just become the conduit to providing health care.” 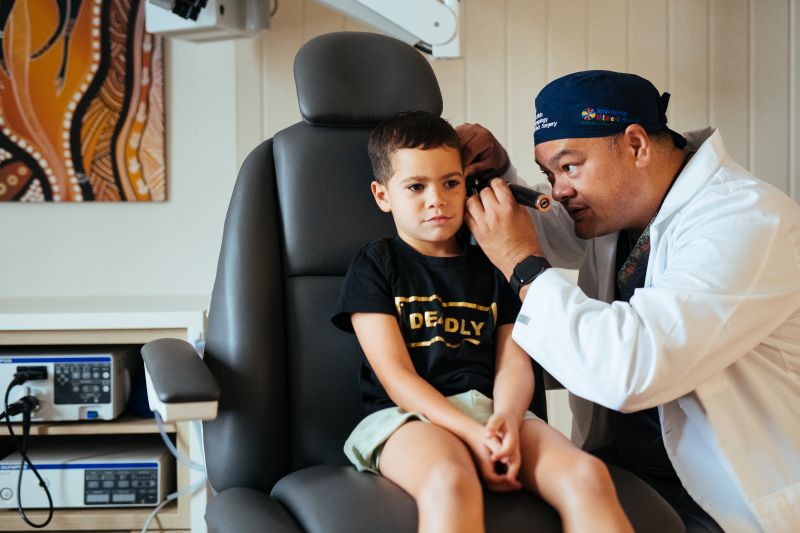 The other benefit to connecting with communities this way is the number of children who can be treated. “I can provide training to the health worker, and they can see 50 kids and screen them. I may only need to intervene for 20 of them and they’ll get accelerated through the health worker. For a kid with ear discharge, waiting for an ENT could take months whereas the health worker can take a photo of the ear and send it to me. ‘Kelvin, what do you think? I’m going to look at doing this, this, this and this’. They can clean the ear, give them drops. It builds confidence in the community health worker. They can take another photo in four days, monitor the kid, and by the time they come to a clinic they’ve had treatment and we can look more closely if there are complications.”

He believes this model can help improve outcomes for Indigenous communities in remote areas and the impact is also being realised in the wider community as demonstrated by little Leo Picker’s predicament. 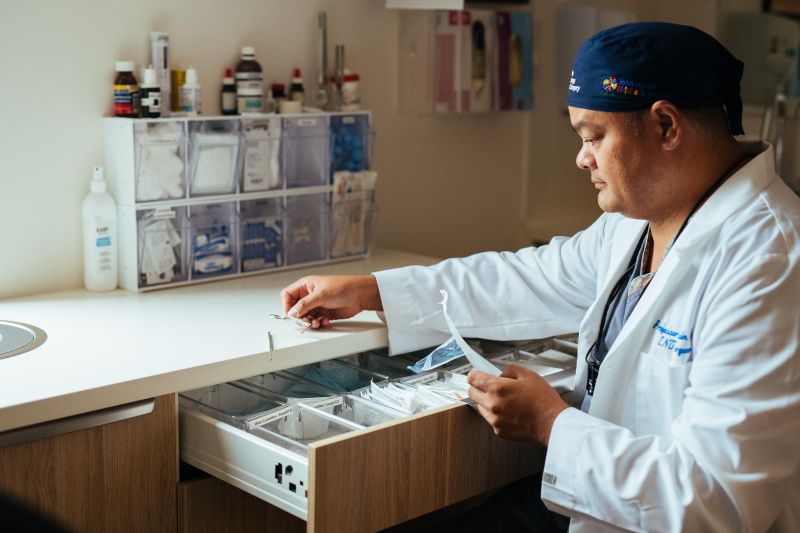 Kelvin Kong is a man in a hurry, though he has one long-term goal for the University of Newcastle. “To be the best place in Australia to study Indigenous health and be supported as an Aboriginal researcher in any field,” says the father-of-three. “This isn’t just about funding my research. We’re talking about transformative change across the University – senior positions of leadership for Aboriginal people, recruiting and supporting Aboriginal academics.”

Pro Vice-Chancellor Indigenous Strategy and Leadership Nathan Towney agrees. “We need to grow the number of Aboriginal health researchers. They best understand the cultural nuances and recognise the needs of communities. Surveys may not be the best way to get information from a community. Sitting down and having a yarn can be more meaningful and effective.”

Adds Kelvin, “When you’re applying for research grants, a lot are based on your track record, your publishing history. The impact factor for me is whether the community will benefit from it, not whether I get a publication out of it. It is about overturning the traditional structures so we have community representation in terms of what research is focused on.”

The University of Newcastle has a long and proud history of Aboriginal and Torres Strait Islander research, led by the Wollotuka Institute, and both Kelvin and Nathan are determined to advance that. Relationships are at the core of the work being done to support change. “Well-meaning research is often done within [Aboriginal] communities but nothing really changes, and they don’t see any benefit,” says Nathan. “The main reason we do research is to benefit communities and we’ve got very strong relationships and networks throughout Australia. We’re very well positioned to be the go-to centre for Aboriginal-led research.”

Adds Kelvin, with a wide smile, “It’s exciting. It might take 10 years, but how amazing would it be?” 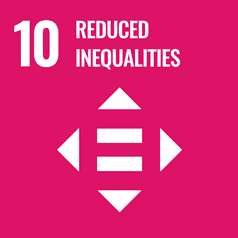