Fabled and true: Tales of slavery, savagery and survival in the lost worlds

An authority on all things American, Dr Kit Candlin is seeking to unearth – and solve – some of its history's most devilish mysteries. 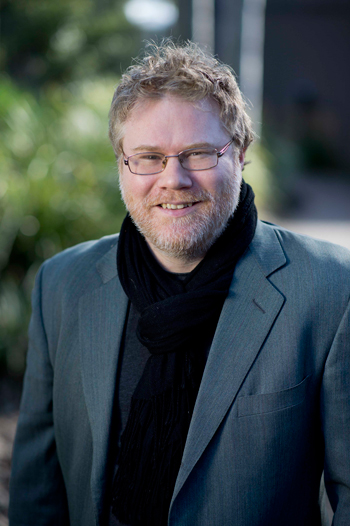 Dr Kit Candlin's job is not for the fainthearted. A self-described "historian of violence," the passionate pioneer is used to detailing some of "the worst, unimaginable punishments" and social arrangements in the Age of Exploration to the early 21stcentury, reconstructing the rise of Europe, Africa and the Americas through chillingly illustrative racial and spatial lenses.

"Basically, we're talking about the empires that looked out on the Atlantic Ocean from 1400-1840," he explains about the latter.

"These include the Mayans, Aztecs, Incas and a small number of other interesting inhabitants."

I like this frame of understanding because there is room to investigate issues on micro and macro levels, such as individual colonies and the differences between cultures and the people who lived between them.

"You can't be as specific with global history or as contextual with national history."

Equally grim, though no less intriguing, Kit also specialises in the Old World slave trade. A walking talking chronology of its origins, abolition and emancipation, the University of Newcastle lecturer concedes his niche is analogous, in many ways, to Holocaust studies.

"Both are very grim," he acknowledges.

"We have to try and stay cheerful and objective."

Kit began his research career with a first class Honours degree at the University of Sydney in 2005. Chiefly focusing on late 18th century India during the one-year probe, he looked to provide a "revisionist history" of the biography of one of its Colonial administrators.

"I then undertook a PhD in 2006," the energetic scholar states.

"Eventually I settled on the conflict and contestation inherent in the southern Caribbean during what we call the Age of Revolutions (1760-1820), particularly in the colonies of Trinidad, Grenada and Demerara."

"I thought it was a great, really interesting region to study for my candidature," he shares.

"During the Age of Revolution (1760-1820), Trinidad for example was originally a Spanish colony filled with French immigrants and their slaves, lots of Republicans, and a few Germans and Portuguese – a real melting pot!"

"Then in 1797 the British seized it from the Iberians"

Painting Trinidad as a "very frontier colony," like Grenada and Demerara in South America, Kit argues the island was also the last part of the Caribbean to be settled.

"I went through documents in London's National Archives as well as archives in the Caribbean to uncover this information," he confirms.

"My findings led to the publication of a few articles and my first book."

Freedom and a farm

Kit stayed on at the University of Sydney after receiving his award in 2009, employed as a Research Associate to work on the celebrated 'Black Loyalist Project.' A story about people wanting to join the Empire, the creative collaboration saw the dedicated historian trace the life journeys of more than 3,000 ex-slaves.

"A lot escaped from their plantations in America's south to join the British frontline in the War of Independence," he advises.

"Then they were granted their freedom, which meant repostings to Nova Scotia, London and eventually Africa."

"Some of those sent to London were even on the First Fleet to Australia as well."

"So the settlement of Australia was a little more multicultural than most would imagine."

Locating a handful of "fantastic resources" throughout the long-term online endeavour, Kit and the team were able to rebuild and articulate the intricacies of slave family life in the late 18th and early 19th centuries.

"We looked at the 'Book of Negroes,' which lists all of the vital statistics, such as owners, origins and first and last names," he reveals.

"We used Virginia's taxation records too."

Reuniting with research partners Professor Iain McCalman and Professor Cassandra Pybus a couple of years later in 2011, Kit decided to pursue another hidden history – this time in rural England. The trio produced a documentary on the famed 'Wuthering Heights' novel during their stint abroad, seeking to learn the root of inspiration for its tortured romantic hero and protagonist, Heathcliff.

"It was pretty clear to us from the get-go that he was an Afro-Caribbean man of mixed race," the dedicated academic clarifies.

"We think the author was influenced by her minister father, who was an anti-slave advocate, and by the Sills family in Dentdale, Yorkshire, who were wealthy Jamaican plantation owners with servants."

"The Bronte sisters passed their farm on route to the Clergy Daughters' School in Cowan Bridge."

From slavery to wealth

In early 2015, the British native penned another book with Cassandra Pybus on the "free people of colour" between slaves and white plantation owners. Called 'Enterprising Women: Gender, Race and Power in the Revolutionary Atlantic', the popular hardback was funded by Kit's Australian Research Council (ARC) Postdoctoral Fellowship and examines self-emancipation, violence and volatility in regional slave societies during the Age of Revolution.

"This particular population usually had white fathers or grandfathers and slave mothers who were possibly freed as well," he divulges.

"A lot of them inherited and a lot of them were quite entrepreneurial, which meant they contributed to the economy by becoming slave owners."

"They also tended to be very mobile, moving around colonies and having their children educated in schools overseas."

A prolific publisher, Kit is also in the process of submitting an ARC grant application for a third book on the New World. Animated and ambitious in equal measure, the multiple award-winner is hoping to explore the transference of brutal regimes from the wider Atlantic to modern American colonies in the lead up to the War of Independence (1740-1765).

"I'm going to tell the story of George Washington too," he discloses.

"My project will put the United States in context – there were definite, outside influences that impacted upon its invention."

A master at multitasking, Kit is simultaneously writing an article about Fédon's Rebellion in Grenada. Bravely launched against the British in 1795, the uprising has since largely been lost in the French Revolutionary wars.

"People just haven't heard of it, let alone talked about it in the context of other slave revolts," he affirms.

"But it's exceptionally significant."

"Around 8,000 slaves died, which is, by some margin, the largest slave rebellion in terms of casualties in the Caribbean."

Firmly believing in the scholastic value of the Atlantic World, Kit is also set to write an article for 'Agora,' the Journal of the Victorian Teachers' Association.

"Educators are looking for ways to approach global history," he suggests.

"If you can learn regional history first, you get the best of both worlds."

Fabled and true: Tales of slavery, savagery and survival in the lost worlds

An authority on all things American, Dr Kit Candlin is seeking to unearth – and solve – some of its history's most devilish mysteries.

Kit completed both a first class honours degree and a PhD at the University of Sydney. Prior to his appointment in 2015 as a lecturer in American History at Newcastle he held a four year ARC funded postdoctoral position at the University of Sydney to research the lives of a number of enterprising and entrepreneurial women in the revolutionary Atlantic 1760-1840. This research resulted in several publications including a monograph written in conjunction with Cassandra Pybus entitled ‘Enterprising Women: Gender Race and Power in the Revolutionary Atlantic 1760-1840’ which was published in January 2015 by the University of Georgia Press.

Kit’s doctoral dissertation completed in 2009 focused on marginal actors within the Atlantic World and the transference of people and ideas across violent colonial and cultural boundaries. His first book “The Last Caribbean Frontier 1795- 1815” (2012) published by Palgrave and shortlisted for the Trevor Reece Memorial Prize in history, expanded on this research, while his second book, “Enterprising Women: Race, Gender and Power in the Revolutionary Atlantic 1770-1830” explored highly successful, self-emancipated slave women and how they negotiated the violent and volatile slave societies of the Atlantic region. Among several articles published by Kit, one in the Journal of Imperial and Commonwealth History, looked at the violence of the Venezuelan civil war and its effects on the rest of the Atlantic world. In conjunction with Cassandra Pybus, Kit also has a forthcoming chapter in War, Demobilisation and Memory: The Legacy of War in the Era of Atlantic Revolutions to be published by Palgrave Macmillan in 2016.

In the context of North America Kit has researched the attraction of loyalism to enslaved workers in both the American War of Independence and the War of 1812. Kit undertook detailed research on the experience of defecting slaves for an ARC funded project [http://www.blackloyalist.org] In the course of that research he was a Mellon Visiting Fellow at the Virginia Historical Society, Richmond. His research on runaway slaves in 1812 has resulted in an internationally recognized article in Slavery and Abolition: ‘The Origins of the Term Refugee in the Early Nineteenth century Atlantic World‘(2009).

Kit’s interests in History range broadly from all aspects of American History, especially colonial America, to European empires and the history of violence and war. In addition he has in-depth knowledge of the Atlantic World from the fifteenth century to the nineteenth. Currently Kit is working on a project to to explore the transference of regimes of violence from the wider Atlantic to the American colonies in the lead up to the American War of Independence.

Kit has been the recipient of numerous awards including:

Enterprising Women : Gender race and Power in the Revolutionary Atlantic$415,000

This project explored the lives of free women of mixed race from  the southern Caribbean  in the Atlantic world and Britain during the age of revolutions (roughly 1760-1840). It concluded that these women were highly mobile and enterprising owning slaves, plantations and other businesses. These women sought advantages for their children in a highly capricious world and that they were remarkably entrepreneurial, enterprising and successful in their endeavours.

A Large Travel Grant to conduct research at the Virginia Historical Society into escaped slaves from the American Revolution who are listed in the 1783 'Book of Negroes'.

Funding body: The University of Sydney

Funding body: The University of Sydney Calling for contributions to this multidisciplinary conference, convened by the UON Centre for the History of Violence.

Calling for contributions to this multidisciplinary conference, convened by the UON Centre for the History of Violence.

As the microbiographies in this book reveal, free women of colour in Britain's Caribbean colonies were not...

The cluster for Historical, Cultural and Critical Inquiry fosters collaborations between our team of people in Ancient History, History and Studies of Religion.