Dr Jessica Ford researches how, why and when feminism appears on screen and what factors contribute to its visibility or invisibility. 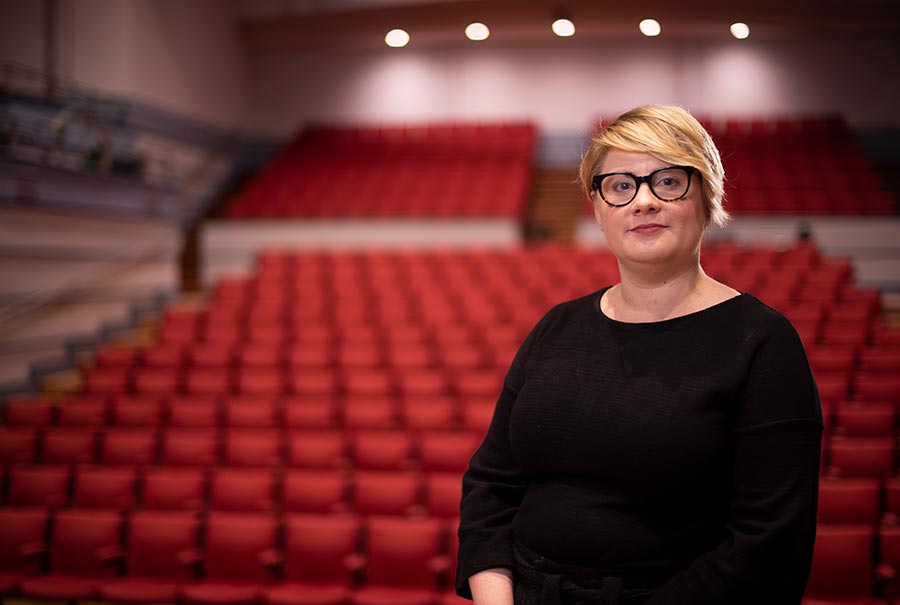 We watch television in our homes with our loved ones - it’s an intimate, personal and often shared experience and is also one of the most powerful means through which we are socialised and taught to interact. Dr Jessica Ford investigates how television teaches us how to think about women’s cultural value and femininity.

“Television is an influential medium for informing and reflecting the cultural norms of a given time. If we can understand what television is doing and saying about women’s value, work and femininity, we can better understand why we think about women how we do,” Jessica said.

“Television is a central cultural form in terms of negotiating gender. Shows like Married at First Sight and The Bachelor tell us what our central social values and cultural expectations of women are.”

Jessica’s research investigates the different cultural, institutional, social, economic and political factors that render feminism visible and invisible in popular culture and in particular on television.  Her research directly informs her teaching of courses including Popular Culture and Society, Peak TV, Music and Culture, Communication and Culture and Digital Culture.

She’s interested in the factors at play in the larger cultural, political and social milieu that makes Beyoncé both able to say she is a feminist and for that act to be read as feminist.

“There have been plenty of times in popular culture history where people have said ‘I’m a feminist’ or ‘I’m not’ but that doesn’t mean that their acts or claims to feminism have been read in those terms. I look at current day mechanisms at play that allow women to be read as feminist or anti-feminist.”

Through her research Jessica has found that feminism has become more easily visible as cultural objects of value, such as pop music or quality television, have become aligned with feminist discourses.

“Popular cultural feminism is in an interesting place at the moment where almost everything is being read as ‘feminist.’ It has become a generic label, almost like a big red stamp that has been slapped on various pop culture concepts from Beyoncé to The Handmaids Tale,” she said.

“Feminism has become an industrial category and big media companies like Hulu, Netfilx and HBO are marketing their television shows as ‘feminist’ to an audience that sees themselves as feminists. Feminism is as much an industrial and market category as it is a political category.”

“We are seeing a more overt and explicit taking up of feminist identity. But at same time, we are also seeing less critical engagement around what it actually means to perform ‘feminism’ in this landscape where there is increased scrutiny around women’s value, labour and visibility.”

Feminism throughout US television history

Jessica’s PhD research placed contemporary American television shows Big Love, Girls, The Good Wife and Orange is the New Black, into a larger political and cultural context and lineage of feminism in US television.

Through her research she found that the kinds of feminisms articulated on US television has changed over time.

“In the 1970s and 80s, TV series like The Mary Tyler Moore Show, Maude and The Golden Girls relied on liberal feminism and centered on women’s access to reproductive rights and workplace rights. These series promoted a ‘feminism’ that was about institutional access and this message was communicated through thin white, heterosexually desirable characters,” Jessica said.

“When we move into the era of the original Roseanne series in the late 80s and early 90s, we see some of the first portrayals working class feminism on US TV. Roseanne and others show how the cultural expectations of mothers and women vary greatly depending on class.”

In the 1990s Ally McBeal focused on sexual harassment and issues facing women in the workplace. Sex and the City portrayed a neo-liberal feminism, which was not about society or women as a collective, but rather about the individual woman’s capacity to empower herself through capitalist means and heterosexual desirability.

“Women-centric ‘empowering’ TV in the late 1990s and early 2000s, relied heavily on consumerist discourses – the more shoes you have the more empowered you are. Each incarnation of feminism on US television has very much been in dialogue the feminism of its time and television’s feminist past. The Mary Tyler Moore Show and I Love Lucy are repeatedly referenced on contemporary television.”

Jessica is working on a book that extends on her PhD research, which involved the development of a framework called ‘feminist sensibility television’.

“The framework is an attempt to move away from binary understandings of cultural objects as pro-feminist, proto-feminist, anti-feminist or post-feminist. The function of the framework is to explore how US television in what I call the ‘post-Sex and the City moment’ are negotiating feminist discourse ideologies and issues.”

The book will be situated in in terms of ‘before and after Trump’ and will look at the considerable shifts that have happened in how women are portrayed on television and how feminism is articulated on US television in the Trump era.

“I’m particularly interested in how feminist discourses have become more overt and largely articulated in line with narrative and aesthetic forms aligned with notions of cinematic television,” Jessica said.

Dr Jessica Ford researches how, why and when feminism appears on screen and what factors contribute to its visibility or invisibility.

Jessica Ford is a co-founder of the Sydney Screen Studies Network and a Contributing Editor of MAI: Feminism and Visual Culture. Jessica's research explores how, when and why feminism happens on screen. “What is feminism” is constantly open to interpretation and negotiation, and television is a key site for this negotiation. In the wake of the Harvey Weinstein scandal this is of increased interest, because many television series, like The Handmaid’s Tale, that have responded to the #MeToo movement. She has published on Buffy the Vampire Slayer, Roseanne, Crazy Ex-Girlfriend and Girls.

Jessica promotes collaboration and reaching across disciplinary boundaries. She is the co-founder of the Sydney Screen Studies Network (SSSN) – a community of film, media, and television researchers from the greater Sydney area. SSSN hosts events, including seminars, screenings, symposia, and workshops. She is a Contributing Editor (Film and Television) of peer-reviewed academic journal MAI: Feminism and Visual Culture founded by Anna Backman Rogers (University of Gothenburg, Sweden) and Anna Misiak (Falmouth University, UK). She has appeared on 2SER, ABC Radio National, ABC NewsRadio and ABC Radio Newcastle. Jessica has published articles for The Conversation and has shared her research at academic conferences and public talks, such as the Critical Animals program at the This is Not Art (TiNA) Festival.

Jessica's teaching philosophy emphasises the importance of student-led learning with a concentration on the knowledges students bring to the classroom. Her teaching practice uses technologies and media in order to engage and employ students’ existing media literacies and interest in media and popular culture to explore conceptual frameworks and unpack theory. The employment teaching strategies that encourage small group work and empowers students to work through conceptual knowledge in a productive context, including class debates and group discussions, which enables deep learning through application and consolidation.

Jessica's PhD Thesis American Feminist Sensibility Television in the Postnetwork Era moves across disciplinary boundaries and draws on and contributes to contemporary debates in media studies, television studies, film studies, and gender studies. The PhD Thesis argued that the feminist work of many contemporary US television series has not been sufficiently recognised because many feminist-inflected series, such as Big Love (HBO 2006–2013), The Good Wife (CBS 2009–2016), Girls (HBO 2012–2017), and Orange is the New Black (Netflix 2013–present), are seemingly at odds with the form of US television currently given most cultural value—quality television. This thesis was highly commended by examiner Dr Claire Perkins (Monash University) as persuasive, timely, and eminently publishable. In her report Perkins notes, “In American Feminist Sensibility Television in the Postnetwork Era Jessica Ford has produced a highly lucid, timely and convincingly argued examination of contemporary scripted US television with a feminist orientation.”