The next big thing in energy that’s already here – Hydrogen

Greenest ride? Why this hydrogen fuel produced from thin air and sunshine is sure to rev you up.

On a busy road in Sydney, a car enters traffic. It’s one of almost 20 million vehicles in Australia registered to do so, yet its journey is unique, momentous, historic even. It’s the first car to make its voyage using a mind-blowing green hydrogen fuel so state-of-the-art, it’s technically still a science experiment.

The fuel is made via a system invented by Professor Behdad Moghtaderi and his team that ‘harvests’ incredibly pure water (H2O) from the air, then uses electrolysis (generated via solar panels) to split it into hydrogen and oxygen, storing the hydrogen as a gas which can be used to fuel vehicles.

Boiling the sophisticated process down to a crude synopsis – this car fuel is manufactured out of thin air and the sun’s rays, and when used, produces emissions safe enough to drink.

Ahh, surely this has a whiff of snake oil about it - what’s the catch?

It must be expensive?

Actually, no. Professor Moghtaderi’s process involves minimal processing due to the extreme purity of water being harvested via the Hydro Harvester, which translates to significantly lower production costs.

“The water we produce via our Hydro Harvester technology is so pure it can be directly fed into the electrolyser, which is a huge advantage over other sources of water. Sea water, wastewater or even tap water require multiple treatment steps to reach the level of purity required in electrolysis. By removing the need for treatment, we can dramatically reduce hydrogen production cost,” said Professor Moghtaderi. 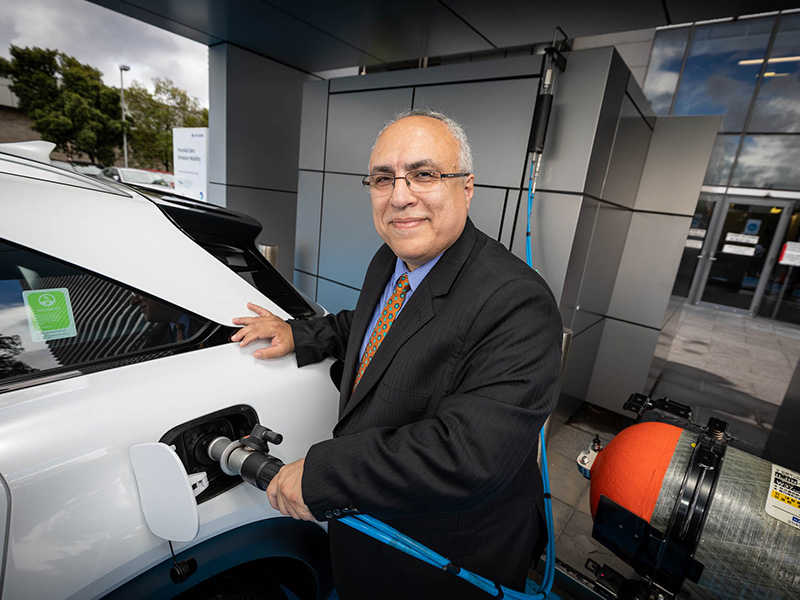 “Importantly, by harvesting water from the air we aren’t placing added pressure on potable water supplies for drinking and household use, which in climates like Australia is a long-term consideration for viability,” he said.

So is it challenging (read costly) to transport and access?

Apparently not. Being off-grid and modular, the system is ideally suited to being set up in any location that offers adequate space and sunlight, neither of which Australia is short on.

Professor Moghtaderi and his team built their fuel generation system on a small site at the University’s Newcastle Institute for Energy and Resources (NIER) research facility.

The innovation ‘harvests’ pure water (H2O) from the air, then uses electrolysis to split the water into hydrogen and oxygen, before storing the hydrogen as a gas which can be used to power vehicles.

The Canberra station is intended to service the fleet of 20 Hyundai NEXO hydrogen fuel cell vehicles purchased by the ACT government. With Hyundai, Toyota, Audi, BMW, Honda and Mercedez-Benz all developing hydrogen fuel cell cars it’s only a matter of time before they become available to public buyers in Australia.

We’ll need more than two public fuel stations to make that a reality.

One option being trialled by Professor Moghtaderi’s team, along with industry partner, Southern Green Gas are ways to combine their green hydrogen with carbon dioxide (also extracted from the air), as a ‘carrier’ or way to readily transport hydrogen for various end users.

With Hyundai, Toyota, Audi, BMW, Honda and Mercedez-Benz all developing hydrogen fuel cell cars it’s only a matter of time before they are available to public buyers in Australia.

The green methane technology will be demonstrated at a gas hub near Roma in Queensland where it will produce approximately 620kg of hydrogen per year, converting it into 74 gigajoules of methane  that can then be injected into the existing network of natural gas pipelines across the East Coast gas grid.

“We’re leveraging Southern Green Gas and their partner APA Group’s expertise and energy infrastructure to transport green methane through existing infrastructure, which will significantly accelerate the adoption of this greener energy option. We expect to have this running later this year,” said Professor Moghtaderi.

So conceivably, you’ll soon be able to use Professor Moghtaderi’s hydrogen fuel not just to drive back and forth to the grocery store, but also to knock up a stir fry and then reward all your hard work with a hot bath.

If you needed proof that there’s sunlight at the end of the fossil fuel tunnel, this is it.

Clean hydrogen technologies with wide-ranging growth possibilities and rapid scalability will form crucial building blocks as Australia seeks to establish itself as a major player in the global hydrogen economy by 2030.

Newcastle, where Professor Moghtaderi and his team are based, is one of the nation’s hydrogen hotspots. It hosts one of the two NSW based hydrogen hubs, recently announced by State Energy Minister Matt Kean, and was the only regional NSW location included in the National Energy Resources Australia’s (NERA) national hydrogen industry cluster.

With strong links to industry and several multidisciplinary teams already conducting world-leading research into sustainable energy technologies, the University of Newcastle is a key player in the region’s development and deployment of new hydrogen focused technologies.

Hydrogen: The task ahead

As part of its own plans to help the region transition into other parts of the economy, the university has established a hydrogen taskforce, on which Professor Moghtaderi serves as an academic advisor.

“As the Hunter region transitions to advanced manufacturing and renewables, there has to be collaboration and communication between research, government, community and industry to develop new opportunities,” said Professor Moghtaderi.

“The University is ideally placed to bring all these groups together. The Hydrogen project my team is working on is a great example of exactly this type of approach working to great effect. Together, we’ve all got an exciting opportunity to move Australia closer to a sustainable future.”

Visit the Newcastle Institute for Energy and Resources