A raw deal for young workers

The roller coaster of emotions 29-year-old Nick experienced throughout the COVID-19 lockdown would make anyone unsteady.

A young hospitality worker in Melbourne during peak lockdown, Nick belongs to a group identified by new research as one of the most adversely affected by the pandemic. Like many, not only his health, but his livelihood was suddenly at risk.

“One day we were going about our lives as normal. Even though it consumed much of our conversation, COVID seemed so far away – and then the next day, it hit us,” Nick recalls.

“My partner is in the arts and her work completely stopped overnight. I was working as the head barista in a Melbourne café. From a staff of eight each shift, we were suddenly stripped back to two, leaving a lot of people in the lurch.”

As lockdown engulfed the country in early April, 70 per cent of hospitality businesses had to reduce staff hours, and 43 per cent either sacked workers or placed them on unpaid leave.

“We had a Facebook group with our boss, who was faced with the challenge of trying to ensure the small number of shifts were being split equally. We were a tight-knit group, so everyone was trying to be conscientious of each other even though they needed the work. It was really hard,” Nick explains.

“On top of that, it became imperative for us to police hygienic practices at work. Suddenly I was copping abuse for having to ‘baby’ people who wouldn’t adhere to social distancing or sanitising their hands.

"In the hospitality and gig economies, if you’re sick, you don’t get money and you don’t make rent. That’s the reality."

“In the hospitality and gig economies, if you’re sick, you don’t get money and you don’t make rent. That’s the reality. People don’t have a choice but to work when they’re not feeling 100 per cent, so all of a sudden, we were incredibly aware of staying well. There was so much additional stress.

“Ironically on one occasion we had a group of 10 police officers who were almost on top of each other in the café, totally disregarding social distancing practices as they waited for their food. My boss just threw his hands up in the air right there and then and we shut the doors.

“Then the city became a ghost town.” 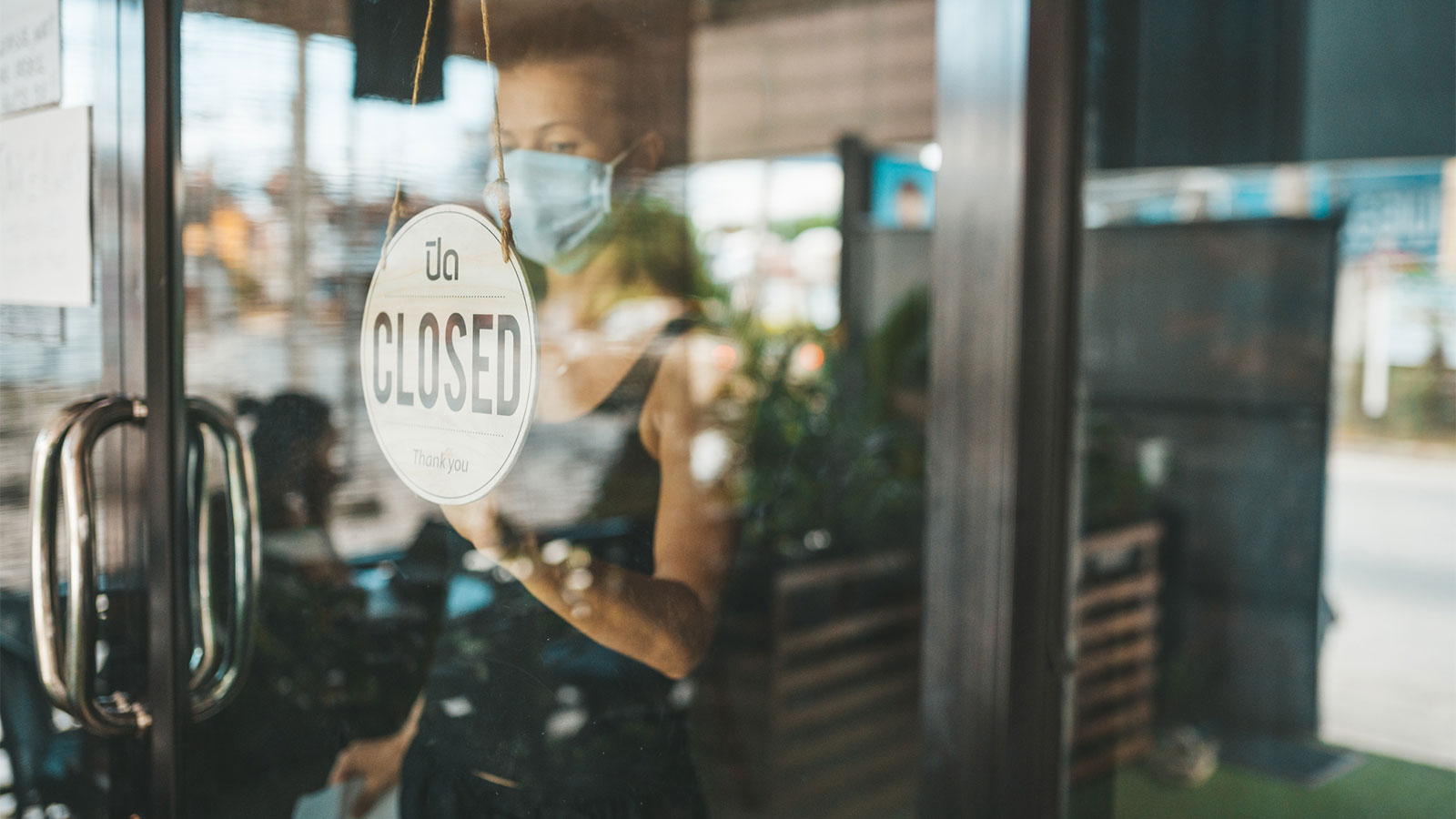 Whilst it’s common to associate the ‘victims’ of COVID-19 with older people, the pandemic put into sharp focus the historic and ongoing challenges facing young hospitality workers.

“We know hospitality was one of the hardest hit industries because of the unique nature of the work. It’s public facing – pretty terrifying in the midst of a pandemic – plus most are casuals or short-term employees, which makes them inherently vulnerable to instability and even exploitation,” sociologist Dr Julia Cook says.

“Although hospitality is widely regarded as ‘unskilled’ labour, our research highlighted the extensive and unique set of skills required in the industry. ‘Emotional labour’ is a term to encapsulate the strategies and resilience needed to provide positive experiences for customers and emotional intelligence needed to recognise signs of excessive intoxication or the possibility of problematic behaviour and violence.”

"most are casuals or short-term employees, which makes them inherently vulnerable to instability and even exploitation."

To explore how pandemic-related loss of work was impacting young people’s lives, Dr Cook and her colleagues from the University of Newcastle’s Youth Studies Network collected the experiences of 32 young people aged between 18 and 31 years old residing in both Melbourne and Newcastle.

Among other things, their findings highlighted that many of the public health responses designed to mitigate the pandemic actually had adverse effects on young hospitality workers.

“The way in which the government’s JobKeeper subsidy was designed didn’t fit the reality of hospitality work. The condition of having to be employed for over 12 months and not on a short-term visa locked out a lot of young people and international students. Only an estimated three in 10 workers were able to access the scheme,” Dr Cook says.

"The consequences of lost shifts and lost income have cascading effects for young people broadly.

"These include their physiological health and mental wellbeing; living situations; education; and both intimate and family relationships."

With participants reporting excessive drinking, the devastation of having flights repeatedly cancelled when trying to get back to family and pursuing ‘dodgy’ one-off jobs for cash, the mental strain was unbearable for many.

“Thankfully I was still getting some shifts, so was at least getting some social interaction and a bit of routine. My partner was at home every day without access to friends and family. She’d been working on a production for only a month prior, so wasn’t entitled to any support. I felt guilty,” Nick reflects.

“The government subsidy was definitely divisive. It was difficult listening to customers annoyed that people were ‘getting more money than they would have working’. Also, the messaging that the support was for people who had ‘lost their job through no fault of their own’, insinuating people who didn’t have a job before were at fault, was very tough to swallow. I was constantly having to bite my tongue.”

"The consequences of lost shifts and lost income have cascading effects for young people broadly."

Having experienced wage theft, missing super and bullying over his career in hospitality, the pandemic finally drove Nick to explore opportunities elsewhere in the industry.

“I’d already been considering pursuing the business-side of things. My partner and I wanted to move back to Newcastle, where my family is, so whilst it was scary, it seemed like the right time. I ended up applying for a job in Newcastle, getting it and having to move back all within seven days.”

Crossing the border from Victoria into New South Wales is an experience that will stay with him forever.

“It feels surreal thinking back to packing up the house and getting all the documentation in order. I think what was most frustrating was the conflicting information. Because everything was happening so fast, you’d call the COVID hotline and get different advice each time. No one really had the answers. It was impossible.

“I remember sitting in my car at the border – sweating – a stack of paperwork ready at my side. I’d been told to try two different passes to give me a better chance of getting home. It was like entering a different country. There was this kind of state patriotism that hadn’t really existed before.

“Then 24 hours later, the border was closed.”

Having left his partner Hayley in Melbourne to see out their lease, their reunion plans in Newcastle became impossible.

“I’d come back to family and a place where it was almost like nothing was going on, whilst she was isolated and lonely in what was an incredibly eerie, lifeless city.”

After months of separation and angst, a flight from Melbourne to Sydney finally delivered Hayley within arm’s reach.

Upon arrival, Hayley waited for six hours beyond the gate while fellow passengers faced questioning, watching-on nervously as some were turned away, having to purchase $1000+ tickets back to Victoria.

With bated breath, her documentation was checked, mandatory questions answered, and she was waved through to begin a two-week quarantine period.

The two were able to breathe a huge sigh of relief.

Now settled together in Newcastle with stable work in a roastery, Nick has started a Diploma of Business Admin in the hopes of escaping a reliance on casual work.

“Casualisation is all well-and-good when things are going well, but at a time of crisis, everything crumbles. In reality, I’ve been lucky, but I hope this experience shines a light on the fragility of the hospitality and gig economies.”

"Without hospitality workers, the economy would crumble, and so we should be better supporting them to succeed."

It’s a sentiment that Dr Cook and her team share.

“Despite the challenges, many young people are drawn to the hospitality industry for the deep connections they form with co-workers and the pride they take in their work and venue,” she explains.

“As a result of our research, we’re recommending stricter enforcement of award conditions, an emphasis on respectful relationships at work, and greater consideration of the enormous value that hospitality labour produces for the industry in public discussions about wages and working conditions.

“Without hospitality workers, the economy would crumble, and so we should be better supporting them to succeed.”