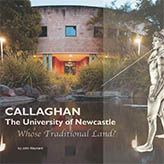 Purchase the book on-line by search "Whose Traditional Land" at a cost of $30 plus postage and handling.