Theory and computation of thermotransport in liquid alloys

Transport of mass in liquid alloys is known to be highly complex because of the great inherent atomic disorder present and the very substantial complexity of the cooperative nature of the movement of atoms in the liquid. Thermal or heat transport in liquids is rather similar in complexity. In liquid metals, heat is propagated mainly by vibrations between the ‘bonds’ of the components of the liquid as well as by the electrons present. Thermotransport (also called thermomigration and thermodiffusion) refers to the complex coupling between mass and thermal transport in liquids and takes the complexity to an even higher level (Allnatt and Lidiard 1993). Thermotransport refers to the heat transported by the migrating atoms themselves. Thermotransport is responsible for the segregation seen in liquid metals (Soret effect) in a temperature gradient. The temperature gradient may occur as a result of the engineering application itself, or it might come about by way of the latent heat that is produced locally during solidification of the liquid. Segregation of the liquid alloy components changes the viscosity of the alloy in a temperature gradient. At solidification, thermotransport significantly disrupts the composition and structure of the solidification front of the solidifying alloy (see, for example, Lodding 1969 and Eslamian et al 2010).

For many years, thermotransport has been described as one of the last very big mountains of diffusion to be scaled. The approach of the mass and thermal transport group of the PRC is to attack the problem of understanding thermotransport by means of a combination of the Onsager theory of irreversible thermodynamics and state of the art molecular dynamics computer simulations. This has allowed us to develop new exact equations for thermotransport properties and to make extensive computer calculations. These are slowly unravelling the mysteries of thermotransport in liquids. So far, we have attacked binary and ternary liquid alloys, such as the Ni-Al (an example of segregation  in this system due to thermotransport is shown in Figure 1) and Cu-Ag systems and the Ni-Co-Al system and we have made extensive calculations of the heats of thermotransport and tracer and collective diffusivities in these systems (Belova et al 2019, Sarder et al 2019, Meyer and Kargl 2013). 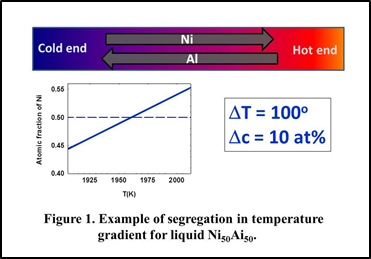 Using the Onsager theory of irreversible thermodynamics along with great care concerning the various reference frames, a substantial breakthrough in the area was made by the team: an exact and elegantly simple relation was derived for binary liquid alloys between the reduced net heat of transport Q*′ (≡ the Soret coefficient) and quantities that can be readily measured (Evteev et al 2015). The relation is:

where D is the interdiffusion coefficient (representing net mass flow), ∆λ is the difference (always positive) in the thermal conductivities of a homogeneous sample and a steady-state segregated sample, Φ, c, N and kB and T are the thermodynamic factor, the molar fraction of one of the atomic components, number of atoms per unit of volume, the Boltzmann constant and temperature respectively.

Thermotransport in liquid alloys is difficult to measure experimentally because of the high temperatures often required and the need to avoid convection effects. The group at Newcastle is computational. The group collaborates with an experimental group at the Institute of Materials Physics in Space headed by Prof. Andreas Meyer in Cologne in Germany.

The group also has theoretical and computational collaborations with Prof. William Yi Wang at Northwestern Polytechnical University in Xi’an in China and Prof. Zi-Kui Liu at Pennsylvania State University in the US.

We plan to develop our approach to address thermotransport in multicomponent liquid alloys including high entropy alloys. This will require a major extension of the application of the Onsager theory of irreversible thermodynamics as well as developing new ab initio molecular dynamics techniques in order to undertake the computer calculations. Apart from metallic systems, we will also address thermotransport in high mobility ionic solid state systems. This includes doped ceria and zirconia systems where the anion mobility is very high but the cation mobility is low. Thermotransport here refers to heat carried by the anions as well as the two types of cation. Thermotransport associated with the slow diffusion of the cations (and indirectly the fast diffusion of the anions) can lead to slow cation segregation during in-service temperature excursions. Calculation of the thermal conductivity of these ionic systems which includes the thermotransport contributions of the anions and the thermal transport coming from the phonons and at different temperatures and compositions is also very welcome.