Why talk about madness

“Mental breakdown is as old as humanity, but there are, it turns out, a host of new ways of thinking and talking about it. Catharine Coleborne’s book provides an expert and highly readable overview of “the new mad studies”. Drawing on her career-long research in the field, Coleborne guides us through the most recent and provocative ideas about human madness. … Among the plethora of books on this vexing subject, Coleborne’s concise account strikes me as the most up-to-date, interesting, and the best informed.” (Mark Micale, Emeritus Professor, University of Illinois, USA) 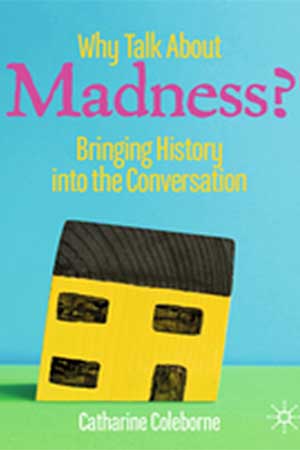 Why talk about madness – Bringing history into the conversation argues for the relevance of historical perspectives on mental health, exploring how these histories can and should inform debates about mental healthcare today.

Bringing a contemporary focus on the recent history of madness, historian Professor Catharine Coleborne wrote the book with the aim of reaching a more relevant audience, including those with lived experiences of mental illness.

“Rather than taking top-down view of psychiatry and talking about doctors, patients and institutions, which has been the norm for a long time, what I’m suggesting is we need to open that out and look at all the different ways in which madness might be understood historically. That way, we can understand how people who identify as ‘mad’ actually have a stake in telling that story,” Professor Coleborne said.

Starting with a brief history of the relevance of first-person accounts, then looking at the significance of other ways of representing the psychiatric ‘patient’, ‘survivor’ or ‘consumer’ over time, this book aims to escape from dominant modes of writing about the asylum. Coleborne says her use of the term ‘mad’ is part of a shift to reclaim madness as a positive identity.

“Patients have over the years described themselves as survivors, mental health service users, and as having lived experiences of madness. These terms have become part of a new movement to understand what it means to be mad,” Professor Coleborne said. “Rather than being seen as a patient in the mental health system somebody might describe themselves as experiencing madness, which is a more powerful way to render it.”

Offering an intervention into new ways of thinking – and talking – about ‘mad’ history, Coleborne explores the social and cultural impact of the history of the mad movement, self-help and mental health consumer advocacy from the 1960s inside a longer tradition of ‘writing madness’. Professor Coleborne says it’s important is to ensure there is a dialogue between the medical world and those who need to receive treatment, and her book aims to bridge the gap between the two.

“There is a long history of talking about mental health problems from an institutional and medicalised perspective. But this book highlights the particularly valid perspectives presented by people with lived experience of mental health issues,” she said. “We need to bring those two groups – the medical professionals and their patients - into alignment.”

Through the book, Professor Coleborne aims to engage those interested in the field in a conversation, just as the subtitle of the book explains.

“One in 4 people today experience a mental health problem and the World Health Organisation says we are currently witnessing a global mental health crisis. The idea is to understand this historically and see what measures were put in place in the past and how we might learn from what worked and what hasn’t worked.”

In the book Coleborne refers to the new mad studies, a field of study in its own right led by scholars in critical disability studies who are interested in consumer-led discussions or discussions led by those with lived experience.

“Mad studies are a way of reclaiming the territory of illness. If we reposition mad studies at the centre we hear quite a different history,” Coleborne said.

“The fact that he is someone who had experienced mental health care himself means his book takes on a particular quality. It’s an insider experience that sheds new light on the institutional past. Mad studies puts the ownership of the topic back in the hands of the people who understand it up close.”

The book is aimed at a global audience, taking historical examples from Australia, New Zealand, Canada and the UK.

“I hope the book is of interest to people with lived experience of mental illness, at the very least to validate their thinking about the way their own experience is becoming an important subject in its own right.