Perhaps the most reliable and direct way of modelling the behaviour of granular materials is to account for the motion and interaction of the individual particles that make up the material. This is the basic idea behind the discrete element method (DEM), which has been applied extensively in geotechnical engineering and related fields as an alternative to continuum models. The main drawback of the DEM is the computational time it requires, which may exceed days or weeks for problems of practical interest.

A new granular contact dynamics (CD) scheme has been developed at the University of Newcastle (Krabbenhoft et al. 2012). In contrast to the conventional DEM, the CD scheme allows for much larger time steps because of its implicit nature. Moreover, it is very efficient for static problems where the time scales are such that dynamic effects are negligible (such as triaxial tests, shear box tests, quasi-static cone penetration, building foundations, embankments and retaining walls). For rigid particle analysis, the formulation requires only a single material parameter as input, namely the inter-particle friction coefficient. For more complex behaviour, a number of more advanced models have been developed that incorporate features such as nonlinear particle elasticity and viscous drag (for particles immersed in a fluid with a significant viscosity). A novel three-dimensional model, which accounts for non-spherical particle geometries using rolling resistance, has also been developed. This can simulate the behaviour of natural granular materials (such as sands) accurately, without having to model the particle geometries in detail (Huang et al. 2013).

Another beauty of the CD scheme is that it allows purely static loading to be simulated without introducing any artificial damping parameters, which are required in conventional DEM . Figure 5 shows a static biaxial test on a granular material where flexible boundary conditions are applied. The numerical results are consistent with the common experimental observations in terms of macroscopic stress-strain response, volume-change behaviour, strain localisation and force transmission. The computation time is also significantly less than the conventional DEM due to fact that a relatively large time step can be used. To model cemented materials, the granular CD scheme has been further developed with a bond model (Meng et al. 2017). This bond model is more general than the conventional DEM because it recovers rigid cementation behaviour as well as purely static behaviour. Three failure criteria are employed in the bond model to define the tensile, shear and torsional strength. The loss of shear or tensile strength, or torque transmission, will lead to the breakage of bonds, and turn the bond into purely frictional contact.

Most recently, polygonal particles have been used in the granular CD scheme to represent the grains and microstructure of rocks (Meng et al. 2018). A Voronoi diagram is used to generate the polygonal particles and their interfaces, while a modified Mohr–Coulomb failure criterion is used to model the failure of the interfaces. The program was validated with uniaxial and biaxial compression tests and Brazilian tests. Furthermore, the program was employed to study the crack propagation and coalescence in brittle rocks using cracked Brazilian disc tests, as shown in Fig. 6. The results are in good agreement with reported experimental data, which shows its potential in modelling mechanical behaviour of brittle rocks. 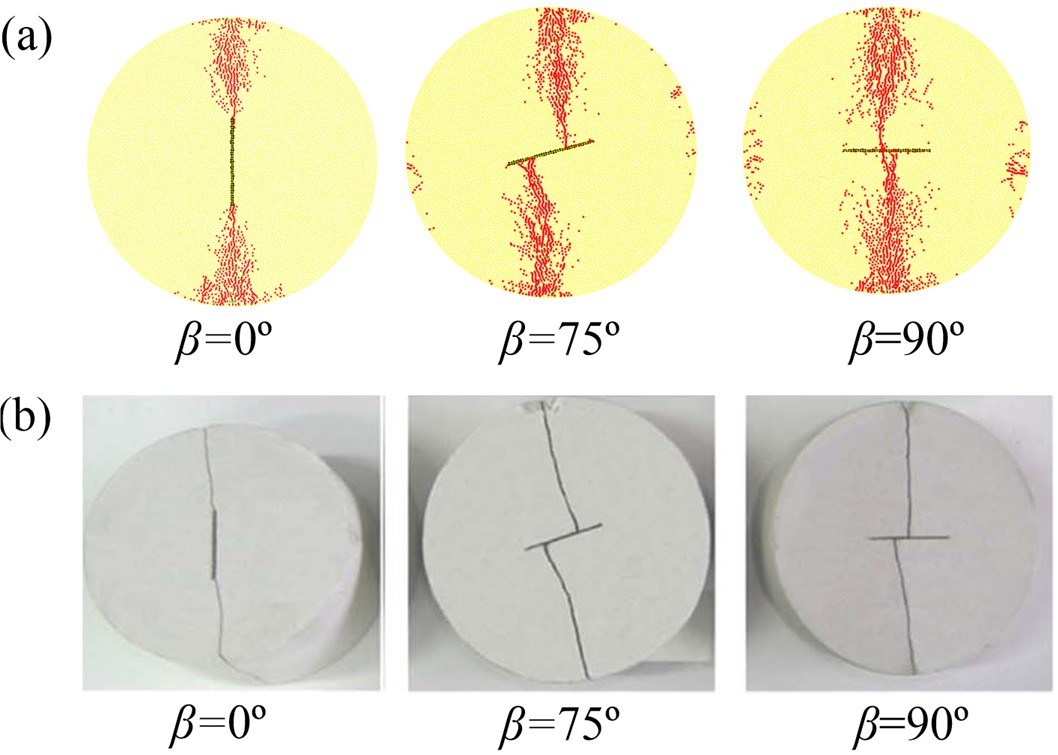