Waste products from industrial operations, if not disposed of properly, have the potential to significantly impact the quality of our natural surface and ground water systems. Geoenvironmental engineering focuses on finding engineered solutions to contaminants that have impacted on groundwater aquifers. This is accomplished through field and laboratory work which allows both the hydraulic characteristics of the aquifer and the extent of contamination of the groundwater to be characterized. This data coupled with pilot scale tests allows the robustness of existing geochemical transport models to be tested thereby providing a greater understanding of how the full scale remedial project will perform over time.

Inside the Geoenvironmental Research Facility

Samples collected by the automatic sampler are analyzed using ion chromatography in the Geoenvironmental Laboratory which contains a state-ofthe-art Dionex ICS-2500 ion chromatograph which allows analysis of major cations and anions as well as free and complex cyanides.

The transport, geochemistry and fate of contamination originating from an Aluminium smelter site in the Hunter Valley, NSW Australia

Since 1969 the Kurri Kurri smelter has continuously used the Hall-Heroult process to produce molten aluminium from the aluminium ore, alumina (Al2O3). This refinement process works by placing alumina and an electrolyte, cryolite (sodium aluminium fluoride, Na3AlF6), into carbon lined "pots" where an electric current is applied causing the alumina to dissociate into aluminium and oxygen. The carbon lining of the "pots" act as the cathode and have a life-span of around 5 years. When the "pot" fails the carbon cathode is removed from the "pot" shell and the "pot" is then re-lined with a new carbon cathode. The discarded pot-liner contains fluoride and sodium from the cryolite solution. Cyanide is also present and is produced under the extreme temperatures in the pot from the reaction between carbon from the cathode and nitrogen from the atmosphere.

Historically, the spent pot liner waste (SPL) was disposed of in open unlined pits where leachate from the pile was caught in a leachate collection pond which was surrounded by a bund to collect any overflow. This began soon after the opening of the plant in 1969 and continued until 1992 when the environmental implications of the groundwater contamination around the SPL stockpile was realized. By 1995 the waste pile was capped thereby minimizing any further leachate production. SPL waste is now stored in large, onsite sheds which allows the waste to be isolated from the surrounding environment. 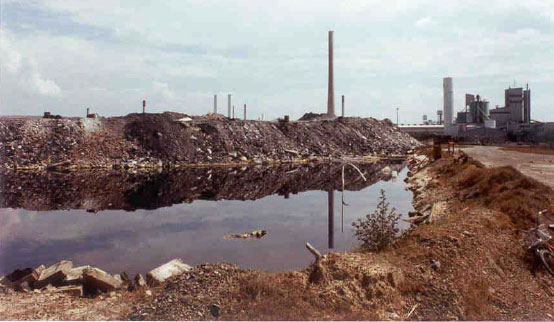 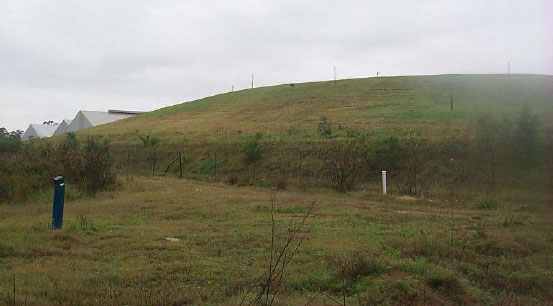 This project aimed to characterize the hydrogeology, geochemistry and physical extent of SPL leachate contamination on the local aquifer system and to recommend clean-up procedures for the site. This was achieved through analysis of groundwater samples taken from an existing monitoring network and the installation of further monitoring wells to augment the field data. Cone Penetration Testing (CPT) is also used to elucidate the subsurface stratigraphy at the site. (Figure 2.3a & 2.3b - click here for Figure 2.3b "CPT results")

The results obtained from groundwater monitoring were used to produce contaminant maps defining the extent of the contaminant plume. The maps, in conjunction with the hydraulic properties of the aquifer were used to make a 3D surface model and preliminary groundwater flow models using MODFLOW software to aid in the assessment of the most appropriate remediation method for the site. Results from corresponding laboratory and pilot scale tests will enable the most environmentally sound method of preventing further spreading of SPL contamination to be implemented. 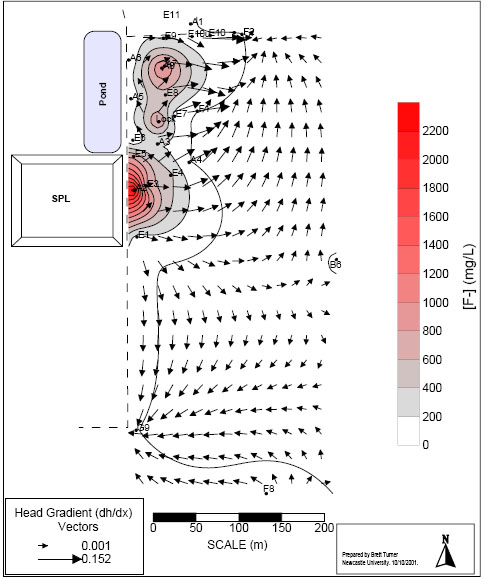 Figure 2.6. Calcite Permeable Reactive Barrier (PRB) model results from MODFLOW showing the reduction in fluoride concentrations transported from under the capped SPL pile at the field site. The left most figure shows results assuming no sorption/retardation (Kd =0) as expected, a Kd value of zero produces no change in the plume. A Kd value of 0.001 (middle figure) mostly contained the plume, albeit with a fluoride concentration exiting the PRB of around 100 mg/L. A Kd value of 0.01 (right figure) was predicted to be adequate for the PRB scenario described above.

Note: the model process used was an extreme simplification using linear isotherms (most suited for sorption behaviour at low contaminant concentrations). At high pH (>9), fluoride sorption onto calcite should be modelled as a Langmuir isotherm. The calcite Kd value is 0.007198 L/g at pH 10.0 as determined in laboratory studies. Calcite PRB installation shown as double line.