Wine drinking is not just an ordinary activity of daily life, but an extraordinary one. As opposed to food, for which we have a fundamental biological drive, wine is a matter of choice, of taste, and often denotes a cultured, not just cultural, identity.

As such its history is studied in Europe, even Britain, as a trade commodity and a value-laden drink. Yet trade and consumption are dependent on production, which is under-researched historically and sociologically. Supported by the ARC Linkage Project scheme, this project focuses on Australia's oldest wine region, the Hunter Valley NSW, to understand how a product that 50 years ago was considered 'unAustralian' has become a lifeblood of some regions and a new national drink... read more.

Call for papers: Worlds in a Wine Glass conference

Australians are shifting from beer to wine, and now a University of Newcast... 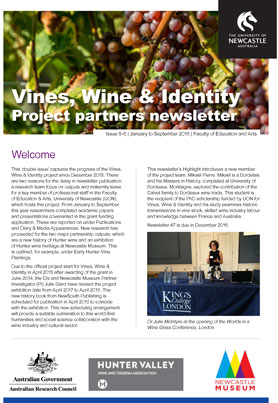 Read the latest from Vines, Wine and Identity

The World in a Wine Glass

Wine has been prominent in the life of New South Wales since the First Fleet arrived, and...