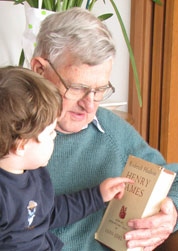 Professor of English: University of Newcastle 1976-1989

Appointed the fourth Professor of English at the University of Newcastle in 1976, Burrows acted in this capacity for 13 years retiring in July 1989 to become the Director of the newly established Centre for Literary and Linguistic Computing (CLLC).

During his time as Professor of English, he was Dean of the Faculty of Arts, head of the Department of English, a member of council and Senate, and served on many committees. Burrows held the Commonwealth Fellowship of St. John's College, Cambridge in 1979-80 and returned to the College on sabbatical leave in 1984. In 1988 he was Visiting Research Fellow in the Institute of Advanced Studies in the Humanities at the University of Edinburgh.

Shortly following his retirement, the title of Emeritus Professor was conferred on Burrows.

With funding from ARC, during the last 10 years of his term as Professor of English, Burrows and his colleagues developed a number of valuable methods of computer-assisted textual analysis. The Centre for Literary and Linguistic Computing was established to allow Burrows and his colleagues to continue the ground-breaking research on the computer assisted analysis of texts.

In 2001 Professor Burrows was awarded the prestigious Busa Award for Outstanding Contributions to the field of humanities computing.

He continues to develop and test the methods of computational stylistics and is an active researcher and collaborator.

John Lambert, who died in May 2001, had been associated with the Newcastle University College and the University of Newcastle for almost half a century. He was appointed to a Lectureship in Mathematics in the early days of the University College. An early interest in computing led him forward to his eventual appointment as the University's Foundation Director of Computing Services. His interests and his efforts ranged across the spectrum of university life and his contributions were many and varied.

Many of his contemporaries first knew John as a cheerful voice on radio. He was a member of John Dease's team of Quiz Kids, who engaged in a high-grade general knowledge program for Radio 2GB. We others, up and down the state, pitted our wits against theirs and usually had to give them best. John's quick wits, confidence, and wide range of knowledge were apparent then and were to remain his hallmark.

Others can say more of his contributions to the life of the young university. His connection with what was later to become the Centre for Literary and Linguistic Computing began in August 1979 when I sought his advice on the use of computer-assistance in my research on Jane Austen's language. John took an immediate and enthusiastic interest and was able, as always, to suggest the latest software for the task.
Over the next decade, as the work advanced from rudimentary trials to widespread international recognition, John was always available when help was needed and was never impatient with our many blunders. He was generous in his help for our research assistant and our keyboard operators. He pointed us in the right direction in the appointment of our first two part-time programmers and, after his retirement from the Computing Service, himself became the third of them.

Throughout the nineties, he refined and added to our growing suite of programs for the VMS-Vax and then, in his last two years or so, helped us to forestall the replacement of the Vax by PCs. His new suite of LILAC programs (LIterature, LAnguage, Computing) existed as a set of advanced prototypes at the time of his unexpected death. He always insisted that, as a computer programmer, he was no more than a tradesman. These fast, accurate, and user-friendly programs are a worthy memorial to a man of many gifts and great modesty.

On the technical side, he had an astonishing capacity for keeping up to date across the growing range of computational possibilities and a youthful willingness to attempt something entirely new. On the personal side, we will always be the poorer without his cheerful company and his quick grasp of a line of thought, whether it bore on our work or on the world at large.