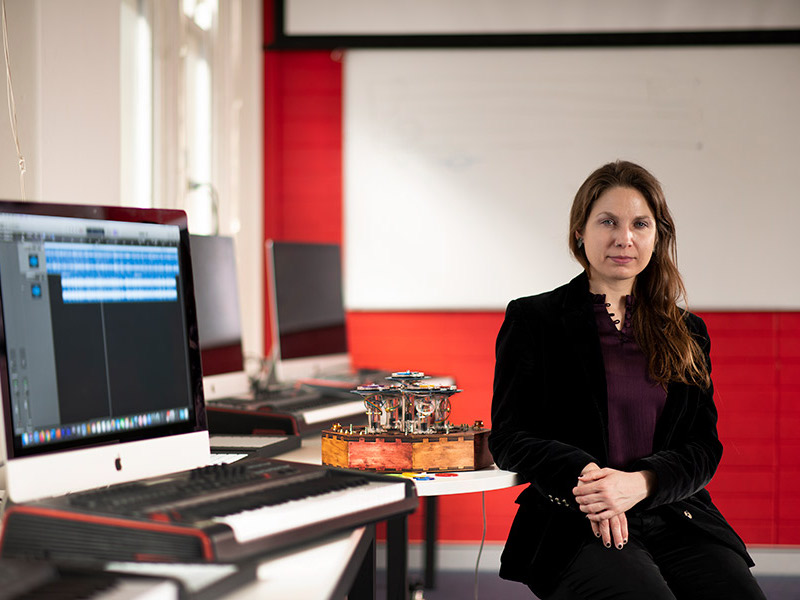 Dr Nicole Carroll has a love for building things. It’s not surprising given that her family are skilled craftspeople, however Nicole isn’t producing your common woodwork items. She is an instrument builder of the 21st century, creating pieces that combine digital technology with the esoteric to produce ‘noise music’.

A new addition to the University of Newcastle in 2020, Nicole came from Brown University in Providence, Rhode Island, a place known as a historical hot bed for noise music.

“The music I produce is experimental noise music. If you are into that niche of music you know what it is and are familiar with that sound world, but if not, you might think it is just cacophonous noise. But at the heart of my music there is a lot of structure,” Nicole said.

To produce her unique sound, Nicole builds instruments using sensors which pick up changes in light, touch, movement and magnetic fields. One of those instruments is the Orrery Arcana which she created having drawn inspiration from the mechanical designs of astronomical clocks and models of the solar system.

“The foundation of Orrery Arcana is a planetary gear train. I use gear movements as a sequencer to determine when sounds are created, so that aspect functions like a drum sequencer. The plates on top of the ‘candles’ (they are actually lights) have light, magnetic, and touch sensors. The gear rotations and the sensors are the elements played during performance,” she said.

“I’ve programed many different options depending on what’s happening in the system but there are lot of controls and parameters I don’t have access to during performance. I’ve been performing with it for several years now so I have a good idea of what it can do but never know for sure and that’s the whole point, to produce unpredictable sound.”

The Orrery Arcana looks like a mystical candelabra, a purposeful design as Nicole works within the themes of tarot cards and magic.

“I design instruments to visually invoke the connotation of an oracle, which aesthetically supports my performance practice of automatic music and writing. I’ve always had an interest in the esoteric. To me the instruments are tools that facilitate communication with the subconscious, external energies, or “whatever is out there,” allowing those entities to tap into my body to create music. I think of my instruments and performance practice as a system of divination, or as a means to communicate with something outside of myself.”

Before she performs Nicole goes through a specific trance process to get into the required mindset.

“During the performance I’m totally checked out and in trance. Afterwards I don’t know what has happened in the moment but have videos to review the performances, which I rely on for further development of the system.”

“I really love to build things and enjoy finding something like old astronomical clock schematics and crafting them into a musical interface, bringing something old back to life within a contemporary object,” Nicole said.

The end product is a performance system that has thousands of options and incorporates chance procedures which make each performance unique.

“Within the system there are other smaller systems, which include NASA data that is being fed into audio processors. I also use tarot cards to drive the chance procedures and randomness of the sounds. To do this I took a deck of tarot cards and made a data string for each card using elements of patterns, colours, and symbolic connotations–essentially boiling the cards down to a series of numbers–which collectively controls elements of sound production and processing in the system.”

Other instruments Nicole has created include an augmented bassoon to which she has added sensors to detect movement.

“If you watch a bassoonist play you can see they have some range of movement in the torso. The sensors I’ve placed on my bassoon use that movement to control audio effects  and musical parameters. I’ve also added touch sensors which sense pressure on a gradient to map to dynamics and effects such as pitch shifting. There is also a condenser microphone mounted on my bocal that is great for picking up vibrations to produce noise textures,” she said.

“When I perform with my augmented bassoon it’s pretty loud and crunchy, it’s nothing like Bach or Beethoven. It’s like playing through a guitar pedal board with a looper, where new layers of sound accumulate through the performance.”

Nicole is teaching software programming in the School of Creative Industries and will also be teaching physical computing and electronic instrument design.

“What I’m doing is fairly unique. I hope it inspires other people to make their own gear. It doesn’t have to be nearly as complicated as what I do. In terms of the academic world I hope to motivate people to bring back a level of craftmanship that seems to be rare today, even amongst electronic instrument builders. There is a large focus on producing industry ready instruments with universal functionality, whereas my focus is one-off custom controllers. I want to remind people that form is really important and as valid as the music itself.”

Nicole’s work in acoustic ecology is also helping to shine a light on how noise is impacting the environment. She records noises found in the environment and turns them into music.

“Over the last five years I’ve been recording in aquatic environments such as waterways and have been hearing lots of noise pollution from vessels, generators and other types of engines,” she said. “I do this type of work to shed some light on the environment for people who wouldn’t normally be tuned into these spaces.”

Our human bodies aren’t equipped to listen to these aquatic spaces so she uses special technology, including hydrophones, or underwater microphones, to make the sound available to the public.

“When people hear these noisy sources they often find them overpowering. When you think about it in the context of tiny aquatic organisms that live in these environments, they are bombarded with vibration constantly. I hope it makes us rethink what we are doing to the world in terms of sound pollution.”