Out of the dust: Pamphlets and political pandemonium

Digging deep into the literary archives, Dr Tod Moore is seeking to understand and stimulate discussion about how contemporary politics has come to be. 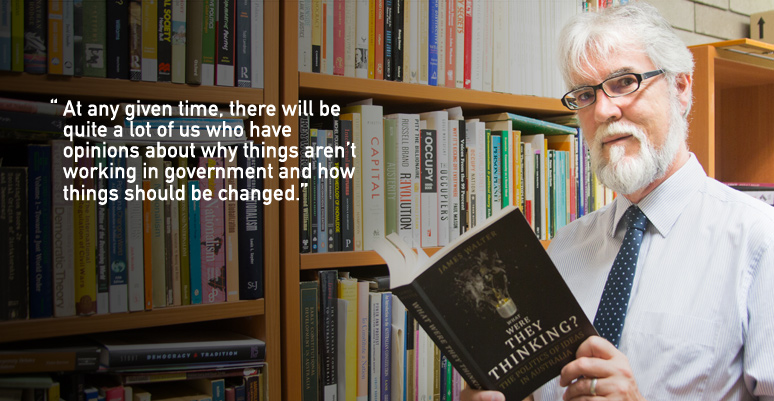 Unlike many political scientists, who study pieces of legislation, policy documents, speeches made by elected leaders and other ideas in politics as they’re happening, Dr Tod Moore looks at the bigger picture – the thoughts and feelings that people express about politics on a meta level.

“At any given time, there will be quite a lot of us who have opinions about why things aren’t working in government and how things should be changed,” he suggests.

“I am always looking for these narratives, particularly in pamphlets.”

Tod’s research career began in 1990, when he commenced a PhD at the University of New England. Chiefly focusing on peace, the six-year probe sought to investigate the origin and evolution of sovereignty theory.

“I specifically studied the writers who invented it,” he recalls.

“The aim was to understand exactly what these English language sources were making of the idea when it first arose in the Late Renaissance.”

“In the end, I found that they were relatively uninterested in the notion and I concluded that that was because they had already been using it without necessarily knowing or realising for over a century.”

“So it wasn’t a surprise to them when it was first articulated.”

Picking up the keys to a bookshop after receiving his award in 1996, Tod looked to “get away” from academia for a little while. The animated scholar didn’t stray for too long, however, welcomed back into the fold at Griffith University in 2001.

“I then accepted a Research Fellowship at Monash University in Melbourne,” he elaborates.

“During this period, I worked with Professor James Walter on a book titled ‘What were they thinking?’ which is about the different currents of thought in Australian politics.”

“We actually found that our country has a long tradition of being creative with the subject.”

“To some extent, all of us had forgotten about this, however, especially considering the rise of various free market ideologies in the 1990s.”

“The disconnect was and continues to be very interesting.”

Tod relocated to the University of Newcastle in 2004, signing on to be a casual academic and then lecturer within its Business School. He began with an examination of approximately 100 pamphlets that were printed in London during the English Revolution (1642-51), and followed it up with a number of successful projects, most recently exploring intellectuals’ reactions to World War 1.

“I am also in the process of wrapping up an assignment on William Harrison Moore, who was a Cambridge man and the first professor to teach political science in Australia,” he shares.

“He wrote a chapter on the study of Australian government in 1913, which was published a year later and given to the delegates of the British Association for the Advancement of Science Congress.”

“It is clearly a foundation text but no one has studied it in depth until now.”

A celebrated wordsmith and workhorse, Tod is currently following the social media campaigns of Bernie Sanders in the United States and Jeremy Corbyn in the United Kingdom.

“These openly socialist candidates are receiving enormous amounts of support, particularly from young voters,” he comments.

The future of preserving the past

In the longer term, Tod is planning to develop his ongoing research on some of the early Marxist documents that were published in Australia between 1900-10 – the period immediately before WW1.

“Other writers who have studied the philosophical tradition have never been able to figure out with clarity what its different factions were,” he explains.

“This is largely because there isn’t a lot of readily available information out there.”

“What I’ve been able to do over the years, however, is track down dozens of pamphlets by tracing the printers, not the authors.”

“Doing so has allowed me to cluster the groups in a much more satisfactory way.”

At the same time believing that we need to be “more aware” of these historical treasures, Tod is encouraging all of us to get involved in conservation efforts too.

“They tell us what the basic ideas of our evolving social consciousness actually are - where they come from and how they’ve changed,” he insists.

“A lot are disappearing though.”

“Many are printed on acid paper so they are literally crumbling.”

“It’s important that everyone work together to salvage as much as possible.”

Out of the dust: Pamphlets and political pandemonium

Digging deep into the literary archives, Dr Tod Moore is seeking to understand and stimulate discussion about how contemporary politics has come to be.

Since my full time appointment in 2010, I have remained research oriented. I previously worked with Prof. Graham Maddox at UNE and then with Prof. James Walter at Monash before coming to Newcastle. Articles in A journals (both sole and co-authored), book chapters, and refereed conference papers, all solidify scholarship in Australian political ideas, Australian federal politics, history of political thought, and sovereignty theory in IR. Recent work combines sovereignty research with history of political thought to examine the nature and significance of liberal imperialism across time. Current projects involve Australian federalism, history of Australian political science, the Occupy Movement, and pamphlets of World War One and the Great Depression. Since 2009 I have been responsible for establishing and coordinating our large POLI3001 capstone course in business and government, and teaching comparative politics and IR courses. I am also involved in HONS and RHD supervision.

Administrative Expertise
Since 2014 I have been Head of Discipline in the Discipline of Politics, Policy, and International Relations.

Collaborations
Invited speaker on federalism at recent conferences. Also maintaining contacts with a number of historians of Australian political thought and IR. Regular at APSA Conferences. Please email me if you want to discuss recent publications or research.